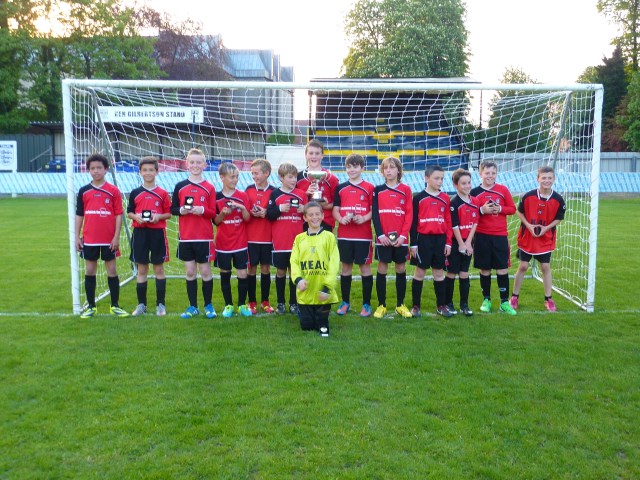 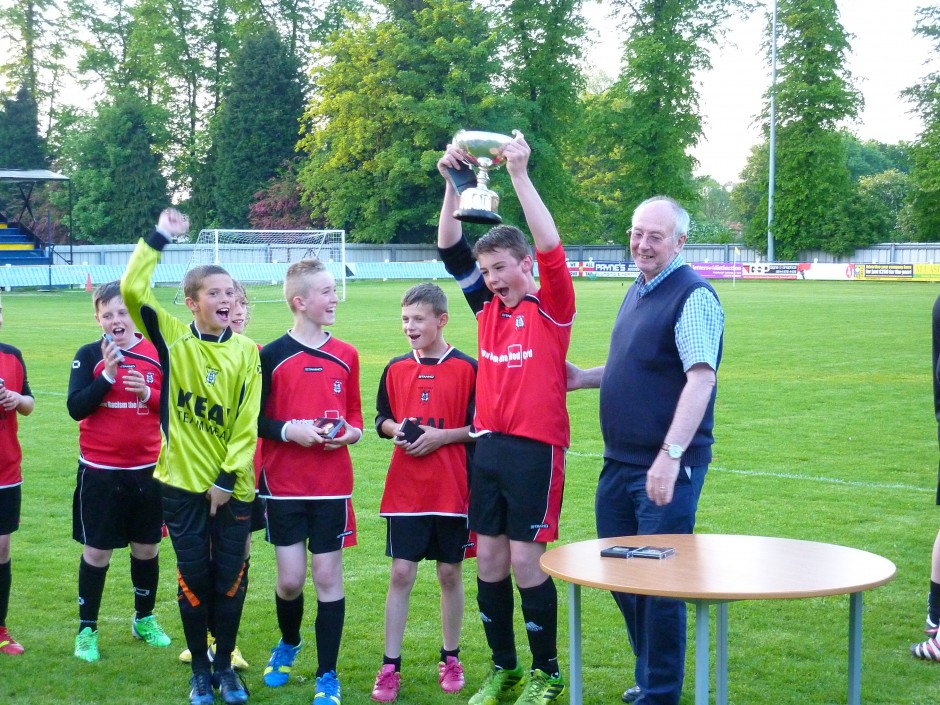 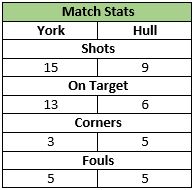 For only the 3rd time since 1966 York U11 Schoolboys Lift the Green Un Cup finishing their season in style with in an exhilarating cup final win over rivals Hull.  After narrowly missing out on the league title to Hull the stage was set for a thrilling cup final at 2Inspire Park the home of Tadcaster Albion.

From the kick off Hull were determined to stamp their dominance on the game and after putting pressure on the York goal some, York keeper Nathan Storr pulled off some great saves to keep the score at 0-0; but the Hull pressure paid off and within three minutes were 0-1 up with a shot just dipping under the crossbar.  Going one down early on sparked York into life with Declan Racher creating space down the left wing to force a fine save from the Hull Keeper starting a period of pressure from York.  Luke Jones also found space down the left but his cross eluded Josh Hall at the far post.  A period of Hull pressure followed and York had the back three of Liam White, Alfie Evans and Simeon Hopkinson and keeper Nathan Storr to thank for keeping the score at 0-1 with some great defending and superb saves.  With the game now end to end with both teams hitting each other on the counter Hull conceded a free kick 18 yards out which Josh Hall delivered as a stinging shot that the Hull Keeper could only parry away; but with Luke Jones on hand to side foot the ball into the back of the net over the diving keeper to put York back onto level terms.  York now buoyed with the goal, spent the remainder of the first period on the attack with Elliot Olivers’ driving run from the right firing low to the keepers left only to see the keeper parry the ball and on the second attempt cut the ball back across goal for Josh Hall to see his side footed shot somehow saved by the diving Hull keeper. Another driving run down the right, this time from Josh Hall saw his cutback fly agonisingly past the on rushing Declan Racher who just couldn’t get enough on the ball to turn it goal bound and York were unlucky not to go into the end of the first period In the lead.

At the start of the first period York conceded an early corner but a great clearance pass from Liam White saw Josh Hall set off on a trademark dazzling run through the Hull defence and rounding the keeper put York into a 2-1 lead.  York now in the ascendancy and their midfield of Jimmy Gore, Elliot Oliver, Declan Racher and Luke Jones taking charge of the game Hull were pressed back into their own half, where Josh Hall, taking the ball of the Hull midfielder went on another stunning run carving through the Hull defence and firing low into the net making it 3-1 to York. An attack from Hull down the right saw a cross elude everyone in the York penalty area and fall to Hull’s left winger; but the on rushing Nathan Storr pulled of a point blank save to keep Hull out. York conceded a free kick on the edge of the penalty and the resulting free kick was sublimely struck into the top right hand corner bringing Hull back into the game making the score 3-2.  York were not finished and some great work by Max Rigby saw Josh Hall claim his hat trick with some excellent trickery and putting York in the driving seat going into the end of the second period 4-2 up.

Hull were not beaten yet and the start of the third period they put the York goal under pressure but found York defenders Tom Eaton and Bankole Claudius-Cole resolute in their defending. With York soaking up the pressure York midfielders Jimmy Gore and Max Rigby starting more York attacks with Alex Kemp and Bankole Claudius-Cole driving down the flanks it was inevitable that the ever predatory Josh Hall would add to his tally and five minute from time once again following a header then pass from Jimmy Gore, Hall carved through the Hull defence with speed and fancy footwork claiming his fourth goal of the game making the final score 5-2.

Managers Comments (Matt Gore): Captain Luke Jones was destined to lift this cup. He and the entire squad were simply outstanding. The togetherness and sublime football throughout the season paid dividends tonight. Man of the match and 4 goal hero Josh Hall was devastating. He was incredible and showed why Hull City have selected him for their academy. This was just reward for a superb season. The win was dedicated to Will Jarvis who having scored over 50 goals this season is recovering from a broken leg.

Man of the Match was deservedly awarded to Josh Hall for his devastating runs.

Collecting their Medals and Cup 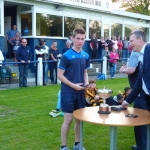 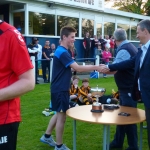 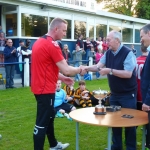 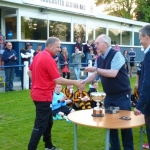 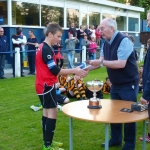 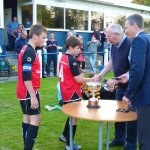 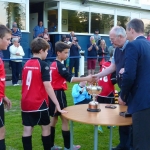 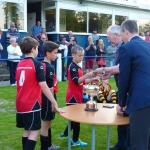 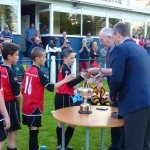 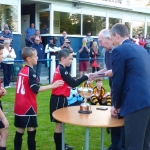 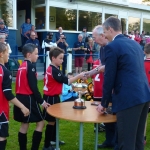 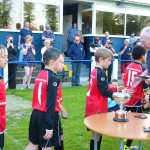 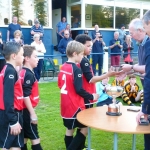 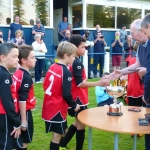 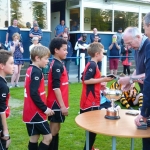 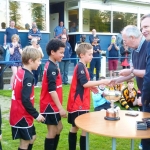 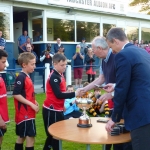 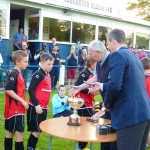 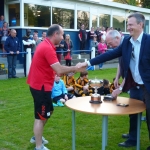 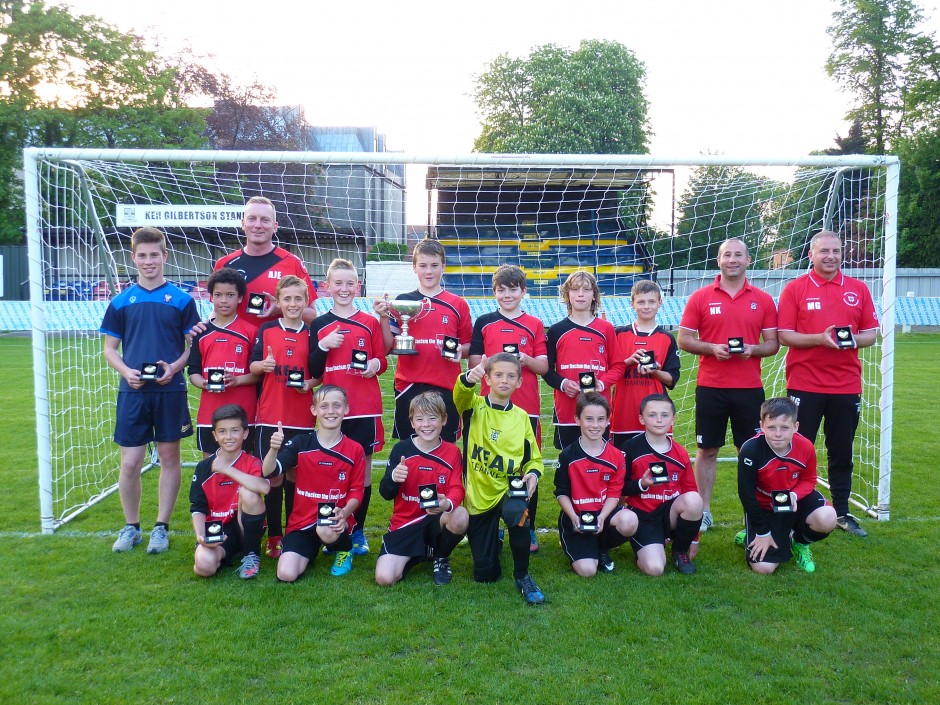