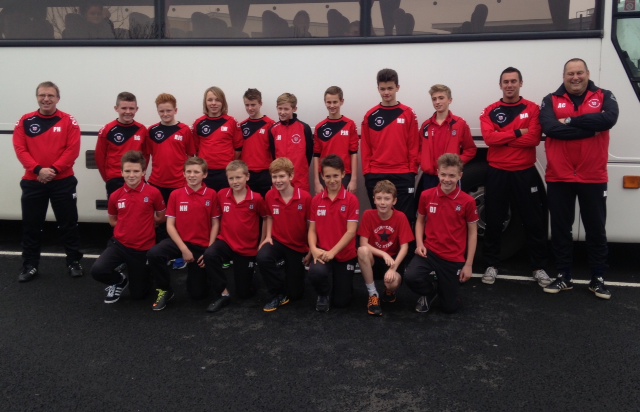 Due to a bye in the first round York Under 13’s entered the ESFA National Cup in the second round with a difficult away tie to Newcastle. This obviously meant an early start for both parents and players, fortunately the hosts delayed the kick off by half an hour.

Newcastle started brightly, passing the ball neatly through the midfield areas and looked dangerous with every attack, York were limited to trying to hit Newcastle on the break. On 10 minutes Newcastle took the lead with a sweet strike from 20 yards which gave York keeper Patrick Randall no chance.

This was the first time that York had fallen behind all season and with Newcastle pushing for a second York’s defence of Lucas Wilson, Ollie Smith, Jamie Higginbotham & Nick Hutton stood firm.

The York central midfielders of Charlie Ward and Danny Allinson then started to get a foothold in the game which allowed Rob Guilfoyle to force a good save from the Newcastle keeper. Lucas Wilson then drove a free kick from 25 yards which again was well saved by the Newcastle keeper.

Newcastle were still pushing for a second and forced a brilliant save from Patrick Randall low down to his left to keep the score at 1-0.

The equaliser seemed to stun Newcastle and York kept up the pressure with a shot from Nick Hutton which was saved following a York corner.

Then on the stroke of half time Danny Allinson slipped a ball behind the Newcastle defence for Joe Crosby to run onto and round the keeper and roll the ball into an empty net to make it 2-1 with the referee blowing his whistle for the interval.

Newcastle looked shell shocked with the turn around and York continued to press with Crosby forcing a save from the keeper. York soon extended their lead from a corner with Manni De Nobriga heading home to make it 3-1.

Newcastle rallied and forced another good save from Randall following a free kick.

Following a York clearance and good link up play by Joe Hickey & Manni De Nobriga who them set up Rob Gulifoyle to score his second and York’s fourth.

York were now on top and the fifth goal followed soon after with Jamie Higginbotham setting up Joe Hickey to make it 5-1 to York.

York then made it 6-1 with Manni De Nobriga grabbing his second.

The last couple of minutes saw a few nasty tackles flying in from the Newcastle players but the York players kept calm and didn’t react and deserved their 6 – 1 victory.