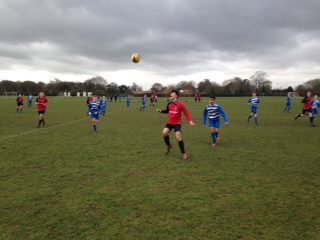 Sheffield started well and created the first chance of the game on 7 minutes with a corner that was narrowly headed over the crossbar.

With Sheffield dominating the game York struggled to get out of their own half and had goalkeeper Harry Griffiths to thank for keeping the scores level by producing a number of fine saves.

Sheffield then took the lead on 20 minutes with a free kick on the edge of the area which gave Griffiths no chance in the York goal. York were soon 2-0 down following a long kick from the Sheffield keeper which caught out the York defence allowing the Sheffield striker to run through and slot the ball into the York net.

The York defence of Dan Stevenson, Will Anderson, Ollie Smith, Josh Hollings and Luke Jones continued to repel the relentless Sheffield attacks, and with Luke Jones making a last ditch goal line clearance, York managed to keep the score to 2-0 at half time.

York suffered an early set back as the second half started, conceding 3 minutes after the restart following a deflected strike.

York continued to work hard but the continuous pressure from Sheffield created a host of chances and York soon found themselves conceding further goals.

With 5 minutes left York managed a consolation goal following good work in the midfield by Lucas Wilson who’s pass allowed Manni De Nobriga to rifle a shot past the Sheffield keeper to make the final score 6-1 to Sheffield.

This was a very difficult morning for York, against a very good Sheffield team, who were too strong for York in all areas of the pitch, but, credit to the whole squad who kept going right to the final whistle.