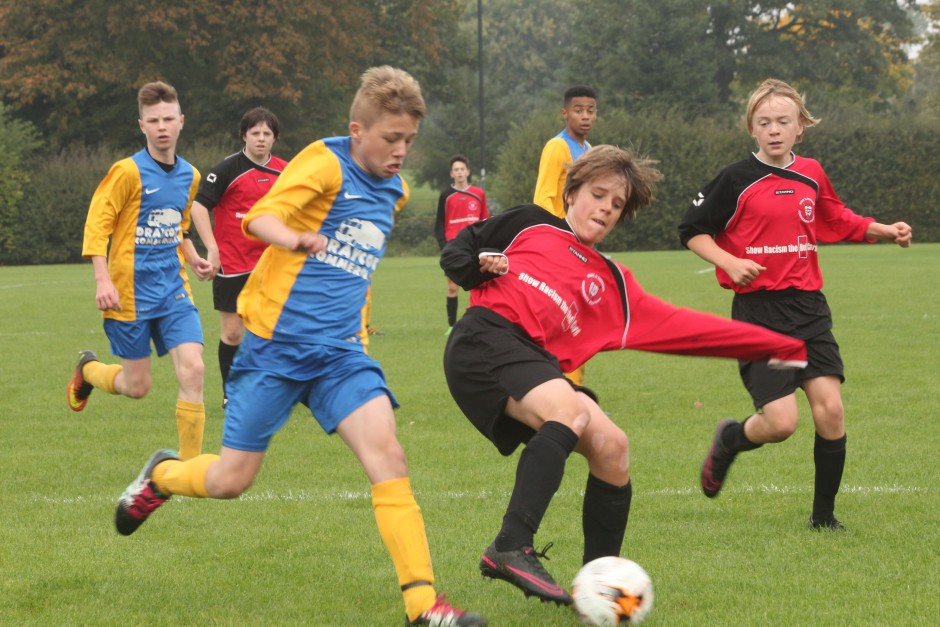 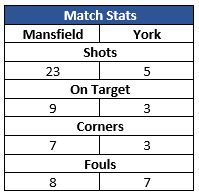 York U14s made the long trip south to play League Champions, Mansfield, in the semi-final of the Yorkshire Cup.  After a long journey and very little warm up time, Mansfield kicked off and put York under pressure from the off with Joseph Hodge making two fine saves inside the opening minutes. In the 3rd minute Mansfield were awarded a free kick a few yards out from the penalty area which they duly converted with a fine shot that left keeper Joseph Hodge little chance.

York were looking sluggish as Mansfield dominated possession; but after the initial set back the back four of Sid McCoy, Ben Fawcett, Leo Jones and Ben Rhodes worked hard to keep the Mansfield attackers at bay.  With York playing uphill, on a somewhat sloping pitch, struggled to find their usual rhythm as Mansfield pushed high up the pitch with Elliot Oliver, Charlie Fort, Ben Calam and Harvey Stephenson in the midfield helping out the defence.

On the occasions that York got the ball to forwards Ed Hammond and Luke Jones they found the Mansfield defence resolute.  It wasn’t until the 26th minute that a speculative shot from 35 yards by Luke Jones tested the Mansfield keeper, which he comfortably dealt with. For all their dominance Mansfield struggled to increase their lead as York defended stubbornly.  Minutes before the end of the half the Mansfield striker found space in the centre of the area and coolly slotted the ball past the York Keeper putting Mansfield 2-0 up going into the break.

Mansfield started the second half on the front foot; but York started to slowly come into the game with Harvey Stephenson forcing a save from the Mansfield keeper while at the other end Joseph Hodge was forced into a diving save with the rebound hitting the post.

As York pushed for a goal with Mansfield caught York on the break as the striker chipped the on-rushing York keeper in the 47th minute giving Mansfield a comfortable 3-0 lead.

York kept battling to get something out of the game with Olly Hanley and Joshua Byfield down the left, and it was the latter that saw his shot blocked after catching the Mansfield keeper out of position. As the minutes ticked by York pushed hard for a consolation goal but found the Mansfield defence resolute with them hitting York on the break trying to increase the score line; but the game finished 3-0 to Mansfield.

Managers Comments (Alan Oliver / Neil Stephenson): . Lads did really well considering forced to only have a couple of minutes to warm up and had to play on a very slopey pitch. Mansfield scored an early goal and then scored just before the stroke of halftime which gave them control of the game. The lads dug deep and tried to get something out of the game.  However, it was not meant to be but overall a great season for York boys. Hopefully will come back stronger next year. Well done to all.