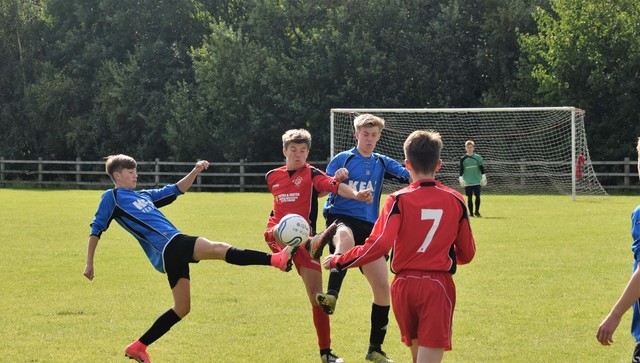 The first league game of the season for the u14 was a difficult away game against Barnsley.

York schoolboys didn’t make the game any easier for themselves with a mistake within the first couple of minutes when a speculative shoot wasn’t cleared and the home side tapped in from two yards.1-0

The city boys pulled themselves together and took the game to the home side and had the better for the next fifteen minutes, Will Hollings with a ray of passes which put the York attack of Aidan Cardow and Lewis Humphreys on the front foot. Before York could get themselves on equal terms Barnsley struck again from a break down York’s left the winger unleashed a shot from twenty yards out that caught the keeper off his line unable to do anything about the shot 2-0.

Taylor Bell for York was keeping Barnsley at full stretch and went close with a shot from the edge of the box. Elliott Rayner and Jackson Cowl were now starting to get hold of the game in the middle of the pitch. But in a cordon copy of the second goal Barnsley broke down the left and before York’s fullback George Turbine could get a tackle on the midfielder he shot giving the York keeper Todd Edgar no chance.3-0.

The half-finished with York playing the better football with the lion share of posseion but nothing so show for their efforts.

The second half started better for the away side and within five minutes York had a free kick on the edge of the box when Rayner was brought down before he could get his shot off. From the free kick which Rayner took the ball hitting the underside of the crossbar with the Barnsley keeper diving full length across the goal colliding with the post head first the ball hit the goal line before in a scramble Bell headed in from a yard out 3-1. The game was held up for five minutes while the home sides keeper got treatment for a cut to his face from the colliding with the post.

York’s defence of Tingle, Hudson and Pearson were kept busy but Barnsley didn’t breach the back four again. York pushed to get something out of the game with Harrison Nicolls and Joe Roughley working tirelessly to the end.