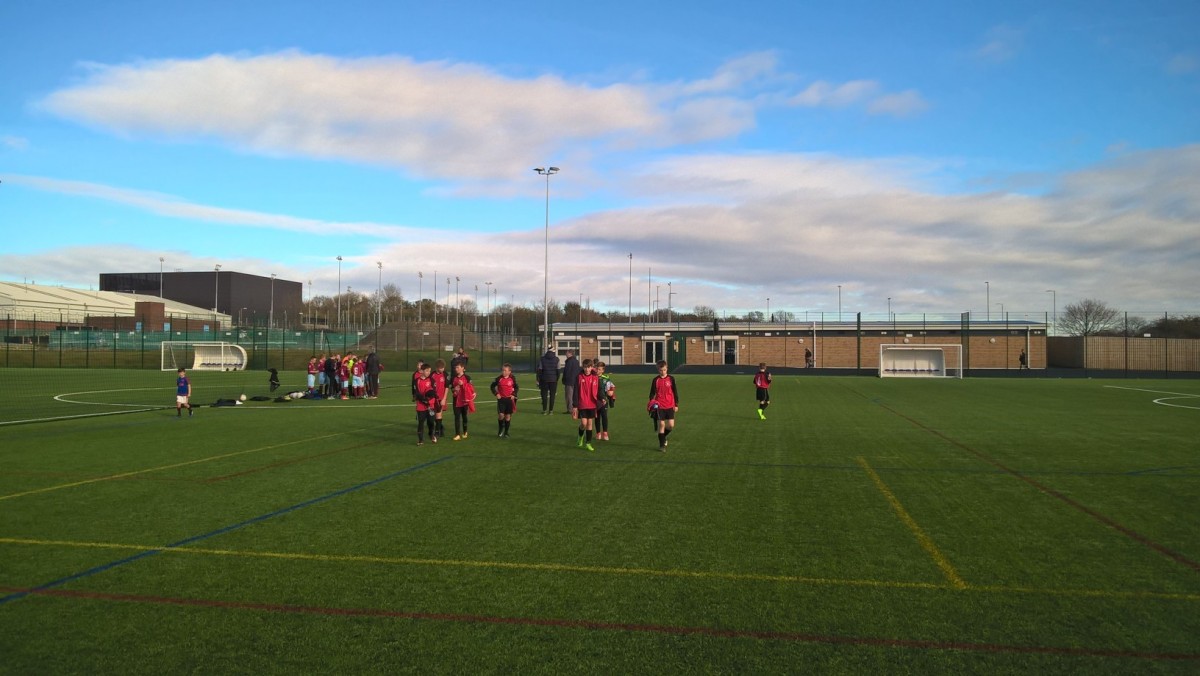 York Schoolboys U12s were back in League action for the trip to Sheffield Schoolboys, after a couple of weeks of friendly matches.  The match was played on one of the 3G pitches at the superb venue of Graves Park, which is one of the FA’s new Football Hubs.  In advance of the kick–off, both teams observed a minute’s silence to mark Armistice Day.

Both teams started the game brightly, but it was York who began to dominate, both in terms of possession and territory.  Jamie Hudson crossed towards the box and Liam Mainprize flicked the ball on for the on-running Ronnie Kelly who lofted the ball over the Sheffield keeper, only to see it go agonisingly beyond the far post.

Sheffield were playing some good passing football themselves, but any through balls they put into the York penalty area, were calmly gathered by Henry Jackson, who was confidently commanding his penalty area.

York’s next good chance came when Ben Myers found Chris Pooley on the left wing. Chris surged down the wing and put in an excellent low cross into the penalty area, which Liam Mainprize was unlucky not to score from, as he was denied by some brave goalkeeping by the Sheffield keeper.

York created another good chance when Ben Myer’s excellent through ball split the Sheffield defence, for Ronnie Kelly to run on to.  Ronnie looked to go around the keeper, who managed to produce a magnificent save to keep the scores level.

York were now playing some good passing football and a patient build up down the right involving Adam Clarkson and Dan Gallagher resulted in Dan putting in a great right-wing cross that was met by a header from Liam Mainprize, but again the Sheffield keeper made the save.

On York’s left flank Ryan Evans and Fraser Clarke were linking up well and it was Fraser who played the ball into Ronnie Kelly which led to York’s best chance of the game.  Ronnie looked to roll his marker, but was brought down just inside the penalty area and the referee awarded the penalty.  Ronnie stepped up to take the spot-kick and was unlucky to see his shot bounce back off the post, and so the score still remained at 0-0.

Sheffield now started to come more into the game, but were denied by a series of well-timed interventions by Paul Iggulden who was marshalling the York defence really well.

York are fortunate to have two top-class goalkeepers at U12s level and it was now George Brown’s opportunity to shine, as he made a fantastic left handed save from a cross-shot, that looked as though it was heading for the bottom left hand corner of the net.  Minutes later, George then had to make a save away to his right, as Sheffield pushed on to snatch a winner.

With about five minutes left, Sheffield had a big shout for a penalty, when one of their midfielders went down in the box, but the referee was well positioned to wave away the penalty claims.

York had the final good chance of the game in the last minute, when Ronnie Kelly found Ben Myers on the left.  Ben lobbed the keeper from about 20 yards, but the ball struck the crossbar and bounced out.  The game therefore finished 0-0, but it was a very entertaining match, between two strong teams who both looked to get the ball down and play good football.  The draw keeps York’s unbeaten run going, with Scarborough now being the next opponents in the League.

Man of the Match – Jamie Hudson.

Jamie has been in outstanding form for York this season, winning many key tackles and is very composed on the ball with a great range of passing wherever he is on the pitch.  Jamie put in another such excellent performance at Sheffield.