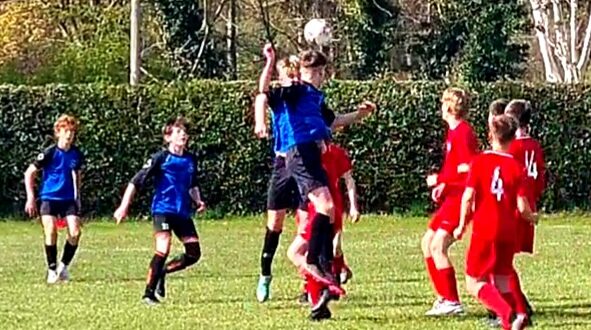 York U13 Schoolboys welcomed East Riding this weekend and were looking to put right the defeat of 2 weeks ago.

Straight from the off York looked up for the challenge, great pressing from York’s midfield quartet of Aidan Fewlass, Jamie Kay, Alex Steel and Todd Fella  saw the ball break free to Ben Farrar, who took it round the keeper to slot it home for a 1-0 lead, 5 minutes later Farrar went on a run that took him in to the penalty box, causing an East Riding defender to slide in missing the ball and taking out Farrar, penalty, Farrar made it 2-0 from the spot.

East Riding showed great spirit and started to fight back in to the game, the pressure resulted in a penalty which was put away with great confidence, halving York’s lead. York soon restored their 2 goal lead with a fantastic 20 yard free kick from McGurrin that rattled in to the net giving the keeper no chance.

The second half saw East Riding coming out the stronger, it required  York’s defence of Mitch Barson, Reece Potter, Finn Hodgson and Alex Steel to stand strong and snuff out any danger. York gained control and a through ball from midfield saw Farrar latch on to the ball and run towards goal, again a a mis-timed tackle saw Farrar brought down in the penalty box, the ref blew for another penalty. James Borlase took responsibility and slotted the ball home to make it 4-1. East Riding showed great spirit and scored their second with some nice football.  York soon extended their lead as Danny Nicholson slotted home York’s fifth and put the game to bed.