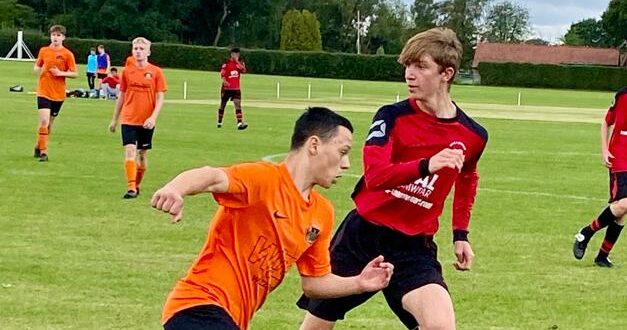 York welcomed Doncaster for their first home game of the season – opponents who always provide a stern test and a team who try to play the game in the right way.

Things got off to an explosive start for the hosts. Ben Armitage picked up possession in the Doncaster half, travelled forward and played an inch-perfect ball in to the path of Adam Nganga. Running in from the right hand side, Nganga burst past a defender and fired an unstoppable shot across goal which left the Doncaster keeper with no chance. The crowd had only just got themselves settled into their deckchairs on the touchline and no sooner were they up in the air cheering as York found themselves a goal to the good. What a start!   This gave York the confidence to get on the ball and play some good, attacking football. Doncaster, however, are not the sort of team to take a backward step. They have strength, skill and aggression and were determined to work their way back into the game. Posing a very real threat up front, their strikers were mobile and clever. Jack Cottam had to show his defensive capabilities and nous to track and handle his man. Ben Garbutt-Smith, growing week-by-week into the centre-back role, backed him up and the pair worked well to organise themselves and those around them. Billy Hobson and Seb Holowkiewicz, in the full-back roles, had to be alert and on their toes to keep on top of Doncaster’s good movement, quick passing and runs in behind.

Doncaster drew level on ten minutes when a cross from the right was headed down and into the corner of the net at the far post. 1-1 and Doncaster were now the dominant team. They showed their quality and desire to pile the pressure on the York defence. Armitage blocked a shot from six yards out, keeper Jacob Bryant punched clear when under pressure and Bryant was then forced into a good save to keep the scores level.

This was the type of game in which central midfield rock Billy Dickinson thrives. Tackling, aerial duels, winning flick-ons, feeding the forward players. Dickinson, Leo Littlewood and Harry Fort worked hard in the central areas to close down the opposition to put their team on the front foot. This pressure paid off and York regained their composure and retook the lead with a lovely goal. Striker Enzo Nunnari fed Armitage, who in turn moved the ball on to Nganga. Shrugging off three defenders, he cut inside before unleashing a delicious, unstoppable left-footed strike into the top corner of the net. As good a goal as you are likely to see at any level – and one that had visiting York Schoolboys’ Secretary, Matt Brown, jumping with joy!  Moments later, Dom Weston beat his man with pace and skill on the left before cutting in and a hitting a low, hard strike, only to see the ball race across the goal and wide of the far post. Nunnari then hit a shot that the keeper did well to save. Doncaster, as expected, came back. They applied a great deal of pressure as the half closed – going close with a header and forcing the excellent Cottam and Garbutt-Smith into a number of decisive blocks, tackles and recoveries.

If York expected Doncaster to come out for the second half fired up, they weren’t disappointed. The visitors enjoyed a great deal of ball in the York half and put York’s defence under a great deal of pressure. York, though, showed plenty of intent themselves – Weston broke through and was denied by the keeper; Nganga showed neat footwork in the area but saw his shot blocked. However, it was following a York attack that Doncaster levelled things up for a second time: a quick ball out from the keeper caught York out and Doncaster equalised with a vicious, dipping volley. 2-2 and it wasn’t long before Doncaster took the lead for the first time. A clipped ball from midfield led to a mix up around the edge of the penalty area, the ball eventually ending up in the York net courtesy of an own goal. 2-3 and York were now staring at defeat. They needed to show resilience – and that’s what they did to battle back and raise their efforts. Littlewood showed good game management, picking up loose balls, tracking midfield runs and doing a lot of the hard graft in midfield. York thought they’d claimed an equaliser when Weston scored following a ball in from Hobson, only to be denied by the referee’s whistle and a very close offside decision. At this stage, the game was end to end with both teams demonstrating tenacity, strength, desire. Pushing men forward and taking a few risks by leaving themselves short at the back, York found an opening when Weston once again beat his man on the left and crossed for Nganga to sweep the ball into the net with his left foot. Hat-trick and 3-3! Rather than settle for a point, both teams seemed to lift their effort levels even further. Tackles flew in, fouls were committed, the crowd became louder. Final minute of the game and Billy Hobson sent a curling right-footed free kick into the Doncaster area. Dickinson climbed high and did well to get his head to the ball and flick it over the stranded, helpless keeper. Time seemed to stand still as his effort flew towards the goal, crashed back off the crossbar and was scrambled to safety. So close for York, narrow escape for Doncaster. It was the final action of a thrilling, end to end, competitive fixture and a hard won point for both teams.

York continue their unbeaten start to the season. Although disappointed not to have won the match, they will take pride in the manner in which they fought back to share the points and then very nearly claim a victory at the end. Notable performances from Jack Cottam, who excelled as he took on a man-making role for much of the game, sacrificing his own game to put the needs of the team first, and the calm and composed Jacob Bryant, who’s handling, kicking and distribution was faultless and comes as a result of his hard work and desire to improve his game in all departments.