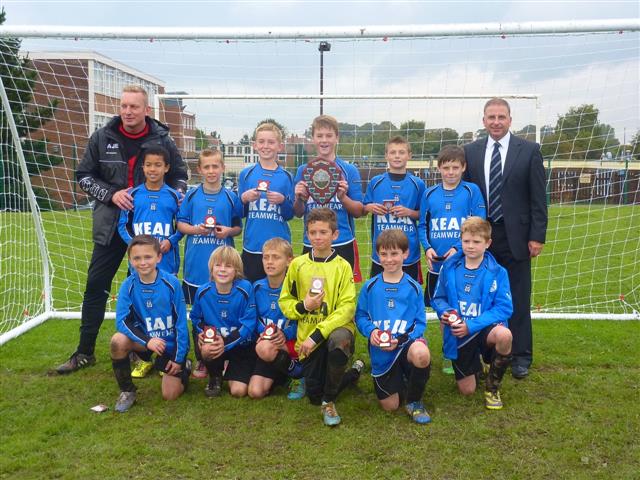 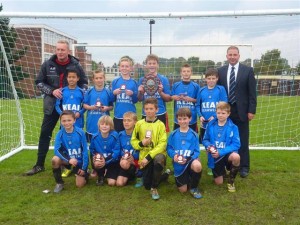 On a dull grey Saturday York Schoolboys arrived in Leeds to take part in the Yorkshire Trophy Tournament, to find they were in a group with Barnsley, Sheffield, and Leeds B. The other group had Nottingham, Scarborough, Leeds A and East Riding. The games were to be 20 minutes duration with no half time.

York started their first game against Barnsley, both teams started slowly with early exchanges in midfield; but it was York who started to up the tempo in midfield with Jimmy Gore and Tom Eaton taking control and passing the ball neatly that led to pressure on the Barnsley goal with Harry Colville, Alex Kemp, Luke Jones and Will Jarvis all coming close to breaking the deadlock, before Will Jarvis made it 1-0 to York with a sublime finish after pouncing on a loose ball from the Barnsley defence. Barnsley then got into their stride and some fine saves from Nathan Storr and fine saving tackle from Elliot Oliver keeping the Barnsley attack out, York were soon to pick up the pace with some great play down the wings from Alex Kemp and Harry Colville and the ever predatory Will Jarvis down the centre put the Barnsley defence under pressure forcing a mistake with Barnsley putting the ball in to their own net to make it 2-0. Some Good defensive work from Liam White, Elliot Oliver and Luke Jones kept the score to 2-0.

Up against Leeds ‘B’ in their second group match York started as they had finished their first game putting the pressure on Leeds ‘B’ from the kick off; but it took a long throw in from Luke Jones to release Will Jarvis one on one with the keeper, a position he rarely misses from to make it 1-0 to York.  This sparked Leeds ‘B’ into life as they applied pressure on the York goal with a shot over the bar and some great defending down the right from Simeon Hopkinson keeping Leeds ‘B’ from scoring.  With good running down the left from Declan Simpson and a perfect cross that Leeds‘B’ could only turn into their own net to make it 2-0 to York.York kept applying the pressure and were soon 3-0 up thanks to a through ball from Luke Jones which Will Jarvis neatly tucked away. More good work from Bankole Claudius-Cole set up Harry Colville with a great shot to claim his first Goal for York Schoolboys and make it 4-0.  Leeds ‘B’ still kept battling and some nice passing from them needed a great recovery tackle from Declan Simpson to keep the score at 4-0, however the resulting corner and well taken header made the score line 4-1. York were not finished yet and with some great play in midfield from Jimmy Gore, Elliot Oliver and Bankole Claudius-Cole gave York a corner in the dying minutes of the game which Harry Colville converted, with a great finish,  to take his tally to two and make the score 5-1 at the final whistle.

For York’s third and final group game they played a very determined and well drilled Sheffield side who put York under pressure from the off.  Although York battled hard they couldn’t seem to find the form and momentum they had in the previous game and it was only some great saves from Nathan Storr and some last gasp defending by Liam White and Simeon Hopkinson that kept the score at 0-0.  But eventually Sheffield broke down a resolute York defence and scored making it 1-0.  Chances at the other end were slim as York struggled to cope with the Sheffield attack and eventually Sheffield scored again to make the final score 2-0.

Two wins and one loss meant that York topped their group and were pitched against East Riding in the semi-final.  A warm up injury to Nathan Storr meant that captain Luke Jones took the goalkeepers position for the game.  East Riding put York under some early pressure; but with some good play all round York soon got into their stride to make it a very even game.  York continued to press and where rewarded with some good midfield interchanges from Alex Kemp and Bankole Claudius-Cole when Jimmy Gore released Harry Colville who made it 1-0.  York continued to apply pressure and Will Jarvis made it 2-0 at the final whistle with a well taken goal.

A win in the semi-final put York against local rivals Leeds ‘A’ in the final.  Nathan Storr was back in goal after missing the previous game.  Some early pressure from Leeds ‘A’ paid off when a well taken corner was headed in to make it 1-0 to Leeds ‘A’.  York upped their game to match Leeds’ A’ and with some great play from Declan Simpson, Alex Kemp, Bankole Claudius-Cole and Jimmy Gore in midfield both teams seemed to cancel each other out.  Chances were few and far between for both sides as the defence of Liam White, Luke Jones and Simeon Hopkinson held out to keep the score at    1-0.  Will Jarvis worked hard up front and on a half chance through ball pushed the ball under the on rushing Leeds ‘A’ goalkeeper narrowly missing the right hand post.  Leeds ‘A’ broke on the counter -attack late on in the game, only for Elliot Oliver to head the ball clear off the line to keep it 1-0 to Leeds ‘A’ at the final whistle.