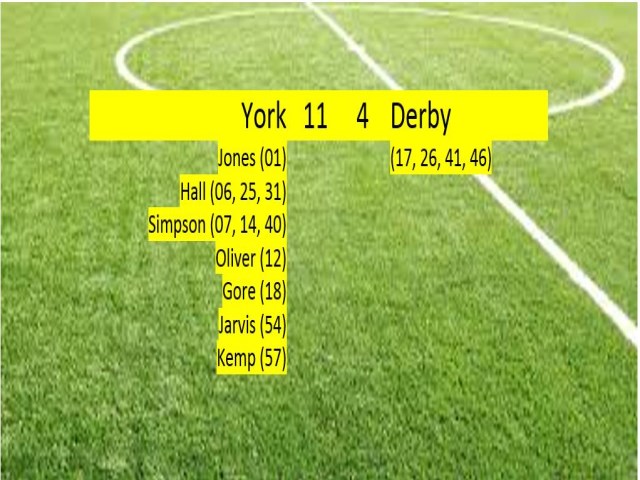 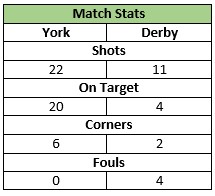 York U11 Schoolboys maintained their perfect start to their first season making it six wins from six with an emphatic home friendly win beating Derby 11-4.

Two minutes silence was observed by both teams before the kick off.  As the rain came down York were on fire from the start with Jimmy Gore pouncing on a loose ball from the Derby kick off resulting in York’s first corner. Elliot Oliver delivered a superb corner which Josh Hall flicked on for Luke Jones to volley into the centre of the net putting York one up in the first minute.

York continued to press Derby in the first period with excellent passing and interchange play in midfield between Jimmy Gore and Elliot Oliver with great running down the wings from Declan Simpson and Josh Hall and it wasn’t long before the wingers combined with some great football with Declan Simpson providing the pass for Josh Hall to make it 2-0 to York.  More pressure from York saw Will Jarvis release Josh Hall for him to return the favour to Declan Simpson and provide a sublime pass for Declan to finish in style making it 3-0 to York. More pressure and smooth one touch passing from the midfield pairing of Elliot Oliver and Jimmy Gore saw Josh make the assist for Elliot Oliver to make it 4-0 to York with a great shot that went over the top of the keeper.  Derby then made their first forage into the York half to gain their first corner, the resulting shot was easily saved by Nathan Storr.  Some great dribbling down the left by Declan Simpson and great interchange play with Will Jarvis resulted in an exquisite chip shot from Declan Simpson that beat the onrushing Derby keeper to make it 5-0 to York. Derby then started to apply some pressure on the York goal and pulled a goal back making it 5-1. As the first period came to an end cool defensive work from Liam White and Simeon Hopkinson released Jimmy Gore to fire York 6-1 in front going into the break.

With Tom Eaton, Alfie Evans and Alex Kemp coming on in place of Luke Jones, Elliot Oliver and Liam White for the second period Derby pressed York only for Nathan Storr to make some fine saves to deny Derby. York Settled back into their rhythm and started to command midfield with Tom Eaton setting up Josh Hall to make it 7-1.  Derby responded and scored their second goal from a corner.  With the score at 7-2 York were in no mood to relax and with more great play Will Jarvis set up Josh Hall for his hat trick.  Derby were slowly getting into the match but with great defending from Alfie Evans and Simeon Hopkinson, their chances were few.  Declan Simpson netted his hat trick with a fine run down the left wing before Derby responded with a goal to make it 9-3 going into the end of the second period.

Elliot Oliver and Liam White replaced hat trick hero’s Declan Simpson and Josh Hall while Luke Jones replaced Simeon Hopkinson. Derby pressured York from the start of the final period with their longest spell of possession, and a misunderstanding between the York defence and the keeper allowed Derby to score their fourth goal. York still had the bit between their teeth and with some great skill down the right by Alex Kemp set up Will Jarvis to beat the keeper in style to make it 10-4 to York. Five minutes left and the hard working Will Jarvis was replaced by Josh Hall who rounded the keeper and with an unselfish pass set up Alex Kemp to fire into an empty net to make the final result 11-4.  With excellent displays from all the team Jimmy Gore was awarded Man of the Match for his commanding role in midfield.