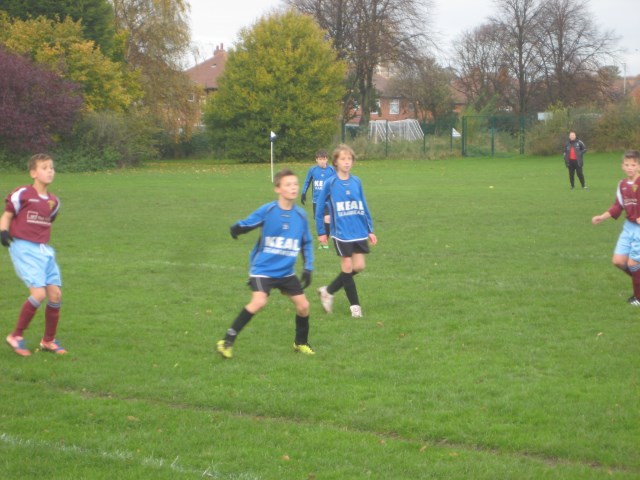 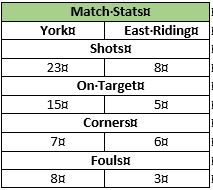 From the kick off East Riding were the fastest out of the blocks closing down the York midfield and forcing the first save of the game from York keeper Nathan Storr.  With some great running down the left wing from Declan Simpson forcing the first corner of the game, which was floated into the penalty area by Declan Simpson only for East Riding to clear their lines.  The clearance was picked up 20 yards out by Liam White, who, with a stunning drive, found the bottom left corner to put York 1-0 up in the 3rd minute and opening his scoring account for York Schoolboys.

East Riding continued to harry the York midfield and were having more possession and breaking down the flanks, their work rate paid off when they forced a corner and  the resulting kick found one of their attackers unmarked on the edge of the area who scored with a great half volley making it 1-1, 16 minutes into the first period.  The rest of the period was battled out in midfield with Jimmy Gore and Elliot Oliver working hard to contain the East Riding offence and the defence of Liam White, Simeon Hopkinson and Luke Jones limiting East Riding to one shot on goal keeping it 1-1 at the break.

East Riding started the second period as they finished the first, forcing a foul in the second minute of the period.  The free kick was beautifully struck over the top of the York wall beating Nathan Storr to make it 1-2 to the visitors.

York were under pressure and were forced to hit East Riding on the break forcing a corner.  The corner was delivered by Josh Hall and the half clearance was picked up by Elliot Oliver who delivered a sublime pass to Will Jarvis who found the bottom right of the goal with a sweet side footed shot making it 2-2

The equaliser sparked York into life, and they started to control midfield with some great passing and wingers Josh Hall and Alex Kemp started to open up the East Riding defence with some great runs down the flanks with the former putting in a looping cross for Will Jarvis who, with an awe-inspiring volley on the turn, found the roof of the net making it 3-2.

With York now in the ascendancy and the central midfield of Jimmy Gore and Elliot Oliver in control York found the form they have played all season with and with some exquisite passing opened up the East Riding defence for Elliot Oliver to again provide Will Jarvis with a great put through for Will to coolly convert for his hat trick and to make the score 4-2.

East Riding were limited to the occasional foray into the York area and from a rare corner a looping shot that Nathan Storr managed to push up allowing Luke Jones to clear off the line.  From a loose ball picked up on the right wing by Josh Hall, who drove at the East Riding defence with some intricate control, fired in past the Riding keeper making it 5-2.  More great skill down the left from Alex Kemp kept the pressure on the East Riding defence and was unlucky to see his double shot saved by the keeper.

York started the third period on the offensive and were rewarded with another goal from Josh Hall who, after a great passing movement between the York midfield struck the ball across the area to find the bottom left corner making it 6-2 early in the third period.  East Riding fought hard but the back three of Tom Eaton, Alfie Evans and Declan Simpson limited the East Riding attack to one shot off target and supported the midfield to keep the momentum in York’s favour.  With York pushing for another goal, they found it hard to break down the East Riding defence and keeper.  With minutes to go Will Jarvis was brought down in the penalty area after a driving run.  He calmly stepped up and converted the penalty placing it low to the right sending the keeper the wrong way claiming his fourth goal of the game and making the final score 7-2 to York.