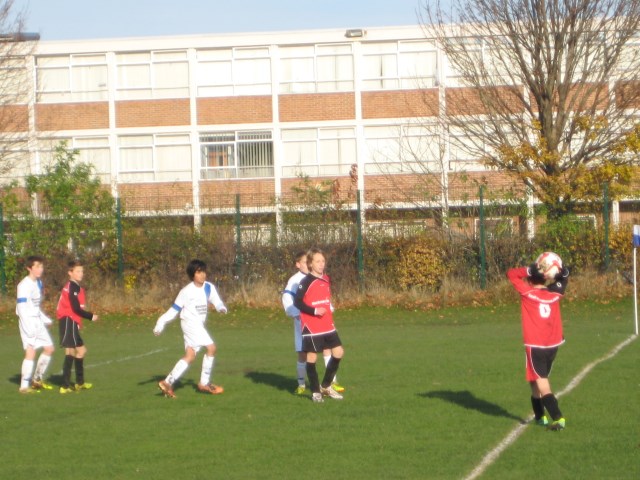 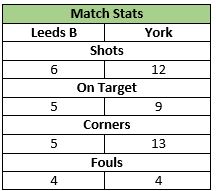 York U11 Schoolboys played their second game of 2014, a friendly away to Leeds B, in driving sleet and winds. From the kick off York pressurised Leeds B with defenders Luke Jones, Declan Simpson and Tom Eaton maintaining a high line and feeding the York midfield. With Leeds happy to sit back defend in the early exchanges, York attacked through the centre with Jimmy Gore and Elliot Oliver and down the flanks with Josh Hall and Alex Kemp; but found a packed and resolute Leeds B defence.

Leeds B soaked up the York pressure and tried to hit York on the break, on the occasions they managed to break through the York defence they found a resolute debutante goalkeeper in Joseph Hodge with a really safe pair of hands. The first period ended 0-0 with York unable to find a way through to break the deadlock.

The start of the second period Leeds B seemed content in trying to catch York on the break but with unwavering defending from Simeon Hopkinson and Liam White, feeding Bankole Claudius-Cole and Declan Simpson down the flanks York were keeping the pressure on Leeds B; but were still unable to find the opening goal. As the weather worsened the game started to open up with Leeds B searching for the opener. With Leeds B now pushing more up field, it was Josh Hall with a pinpoint through ball to Will Jarvis opened up the Leeds B defence who, with aplomb, fired over the on rushing Leeds B keeper from 12 yards to break the deadlock and make it 1-0 going into the end of the second period.

As the third period started both teams struggled with the weather with York having the majority of possession but still unable to add their tally of goals. Both teams were battling against the worsening elements as well as each other. With minutes remaining on the clock Leeds B were awarded a penalty for an adjudged foul just inside the penalty area.

A well taken penalty to the right hand side of the goal was magnificently saved by Joseph Hodge, diving to his left and pushing the ball round the post. This save capped a great performance from the York Goalkeeper in his first outing for the YSB U11’s.

Man of the Match was awarded to Tom Eaton for his outstanding display in defence and midfield throughout the game.