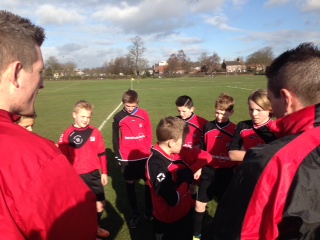 York lost narrowly in a thrilling encounter against a very strong Sheffield side in the Michael Dale Trophy quarter final.  The lads battled heroically and gave it their all going 1-0 up before eventually losing 2-1 late on. A spirited performance saw Joe Crosby score and plenty of drama with the York goalkeeper Harry Griffiths saving a penalty.

KNOCKOUT success eluded York Schoolboys Under-12s footballers as they bowed out of the Michael Dale Trophy at the quarter-final stages. The U12s turned in their best performance of the season despite going down 2-1 to a very strong Sheffield team in the last eight. Having won all league and cup games so far this season, Sheffield started the stronger of the two teams and dominated the early exchanges, hitting the crossbar twice in the opening ten minutes. Strong runs from Charlie Ward and Dan Allinson failed to unlock the Sheffield defence, but on 20 minutes York took the lead. Striker Joe Crosby was fouled outside the penalty area and York were awarded a direct free-kick. The ball was floated to the far post and Crosby volleyed home from five yards. After the break, the York back four of Lucas Wilson, Jamie Higginbotham, Nick Hutton and Joseph Hobson were caught napping and ’keeper Harry Griffiths was forced to pull down a Sheffield striker in the box. Griffiths pulled off a fine save to keep York in front, but Sheffield struck twice in five minutes late on. In the closing minutes, York striker Luke Morris turned and slipped the ball to Crosby, but his shot could only find the side netting.