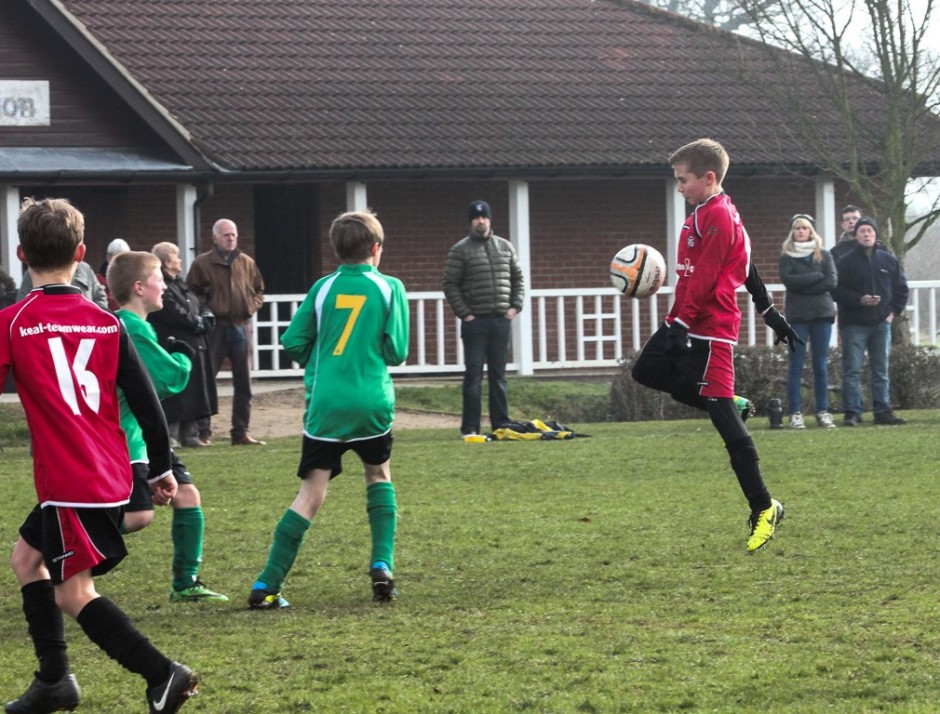 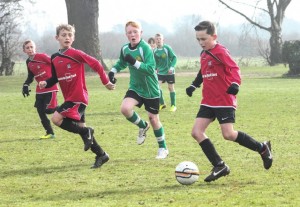 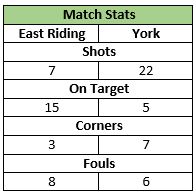 York U11 Schoolboys make it through to the final of the “Green Un Cup” with an eight goal demolition away at East Riding, courtesy of two hat-tricks and a brace.

It was East Riding who started the brighter of the two sides, controlling midfield and putting the York defence of Liam White, Simeon Hopkinson and Luke Jones under intense pressure for long periods while York struggled to find their fluency.  East Riding broke through and a last ditched tackle by Jimmy Gore thwarted a scoring opportunity. At the other end York had several attempts at goal but nothing came of it. East Ridings pressure however was rewarded with a goal on thirteen minutes with the York defence outnumbered and some great passing left Nathan Storr stranded as they calmly finished making it 1-0.

This sparked York into life with Elliott Oliver and Jimmy Gore supporting the York forages into the opposition half.  On seventeen minutes, with York under pressure from another East Riding attack a pinpoint pass from defence by Luke Jones found Will Jarvis just the other side of the half way line, with still a lot to do and with great control Will Jarvis beat the two East Riding defenders and shooting low to the right to beat the on-rushing East Riding keeper making it 1-1- at the end of the first period.

With York now on level terms at the start of the second period it was York who were now dominating the game and putting the East Riding goal under siege.  After an exquisite dribbling run from Josh Hall, after picking the ball up in midfield, saw him beat the East riding defence before side footing the ball into the back of the net making it 1-2.  A fine save from Nathan Storr kept the hosts at bay before a fine passing move in front of the East Riding goal between Declan Simpson and Jimmy Gore , the latter laying the ball off to Will Jarvis who finished with ease making it 1-3.  The East Riding attacks were kept at bay with stout defending from Tom Eaton and Alfie Evans, while Jimmy Gore and Luke Jones controlled the midfield, another great run from Will Jarvis saw him cut the ball back for Josh Hall who finished with deadly accuracy making it 1-4.  York were in dominant mood and a half clearance from a corner was picked up by Liam White who narrowly shot over the bar.

York started the third period as they finished the second, in total command, which saw Will Jarvis turn provider again for Josh Hall to claim the first hat-trick of the game, making it 1-5.  A driving run down the left flank from Declan Simpson from a quick free kick saw him cut the ball back for Bankole Claudius-Cole to slot into the net making it 1-6.  With York now comfortable a long punt up field from Nathan Storr found Will Jarvis on an electric run and a finish to match to claim his hat-trick and making the score 1-7.  York still pushed the East Riding defence and from a Josh Hall short corner, Will Jarvis fired in a dangerous cross which was turned in at the back post by the on rushing Bankole Claudius-Cole to claim his second goal and make it 1-8 at the final whistle.

Manager Matt Gore said “We struggled to compose ourselves in the first 10-15 minutes and found ourselves one nil down. However we discussed before the game about not panicking should we go behind. From that point until the final whistle the entire squad was outstanding and played devastating football. They couldn’t live with us and we got what we deserved. It’s great to be in a cup final in our first season together and to still be in with a shout of winning the league too is amazing. We have Barnsley and Leeds left to play. Win both games and we are league champions.”

Man of the Match was awarded to Josh Hall for his devastating runs.