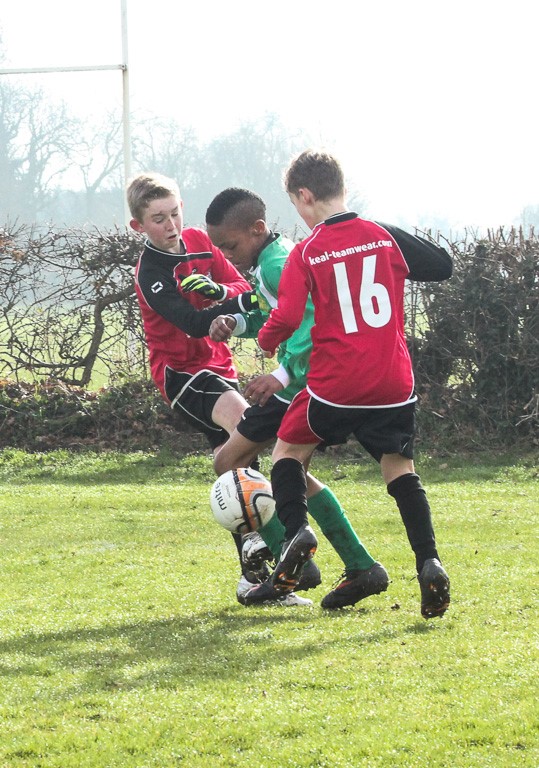 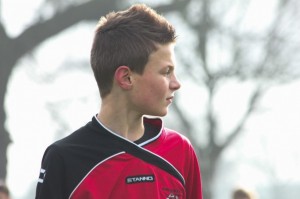 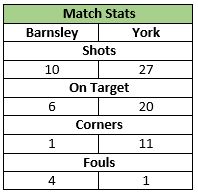 York U11 Schoolboys returned to league action with a 7 goal mauling away to Barnsley, courtesy of a quartet of goals from the predatory Josh Hall.

York started the game in a dominant mood attacking the Barnsley goal with early shots from Bankole Claudius-Cole, Luke Jones and Jimmy Gore.  A Barnsley break saw Nathan Storr pull of a fine save keeping the score level in the early exchanges.  York continued to press with Jimmy Gore and Luke Jones controlling the midfield and the back three of

Liam White, Tom Eaton and Alfie Evans clearing up any Barnsley attack. With all of York’s early pressure it wasn’t until the twelfth minute that it reaped dividends, with a run down the right by Bankole Claudius-Cole, cutting the ball back to Josh Hall to open the scoring.  With York pressing down each wing, with some great passing football, doubled their lead on sixteen minutes with Declan Simpson cutting in from the left, after a great run, and hitting a stunning shot that the Barnsley keeper could only palm away with the loose ball falling to Bankole Claudius-Cole who tucked it away making it 0-2.  In the dying minutes of the first period an over hit long pass from Tom Eaton saw the bounce catch the Barnsley keeper out, taking two attempts to prevent the ball finding the back of the net.

York started the second period in attack mode and another great run down the left from Declan Simpson, cutting the ball back for Josh Hall to despatch the ball past the Barnsley keeper to make It 0-3 in the first minute.  With Simeon Hopkinson, Luke Jones and Liam White now in defence and pushing high up the field, Barnsley tried hitting York on the counter attack, but these attacks were kept to a minimum by the tireless work rate of Elliot Oliver in midfield who winning the ball was feeding Alex Kemp down the right, Jimmy Gore worked hard through the middle to keep York attacking.  With the introduction of attacking debutante Oliver Blackwell York were now fully in control.  While Barnsley struggled to clear their lines the ball was won by Declan Simpson in the penalty area, who after some neat close control rounding two defenders, placed the ball past the Barnsley keeper making it 0-4 halfway through the second period.  A rare Barnsley counter attack caught York napping with the Barnsley forward firing a great shot to make it 1-4.  With minutes left in the second period Josh fired in a beautifully weighted free kick which was met by a great header at the far post by Oliver Blackwell to claim a goal in his first outing for York Schoolboys, making it 1-5 at the end of the period.

York were hungry for more goals and an early third period Barnsley attack saw Nathan Storr diving at the feet of the Barnsley forward to foil another attack.  More pressure from Barnsley saw Nathan Storr pull off another diving save at the attackers’ feet while Liam White, now playing sweeper, was mopping up the rare Barnsley forages. A quickly taken short corner by Elliot Oliver saw Alex Kemp pull the ball back for Josh Hall, who hit a stunning 25 yard shot into the roof of the net making it 1-6 to claim his hat-trick.  With York on top the unstoppable Josh Hall picked up the ball halfway inside the Barnsley half running through the defence and firing low and right to claim his fourth goal of the game, making it 1-7.  A great reflex save by Nathan Storr kept Barnsley’s tally to one, keeping the final score 1-7.

Managers Comments (Matt Gore): Barnsley away can be a bit of a Banana Skin so to put in a top class performance like we did was very pleasing. I thought every player was outstanding today. We wanted to do it for Will Jarvis who even though he has a fractured leg still came to watch his team. He has scored over 50 goals for us including 8 hat tricks. So to have him missing for the business end is devastating for him and for us. We all wish him a speedy recovery.

Man of the Match was awarded to Nathan Storr for his faultless display.