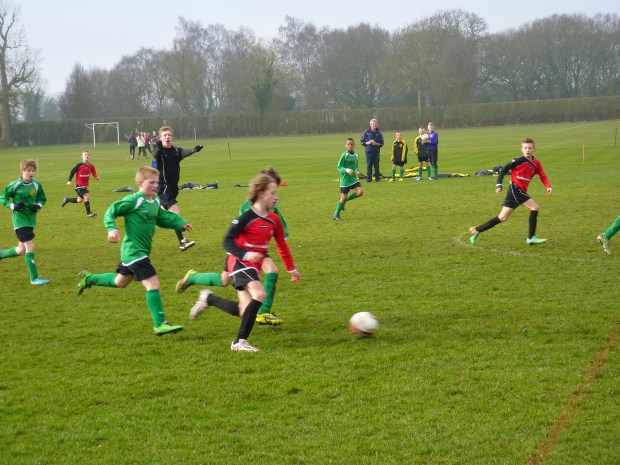 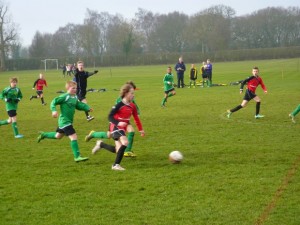 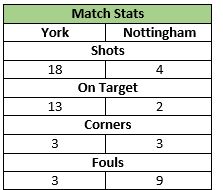 York U11 Schoolboys returned to league action with 5-2 win against a strong and very physical Nottingham side.

York were slow out of the blocks with Nottingham harrying and breaking down any York possession. It was against the run of play when some fine control from Elliot Oliver in midfield released Josh Hall down the right flank, who, with electric pace and control rounded two defenders shooting low to the right past the diving Nottingham keeper making it 1-0 to York.

With the goal now settling any York nerves, they were unlucky not to capitalise on there one goal advantage with a number of chances going begging, before a break by Nottingham forced a stunning save from Nathan Storr, with York slow to clear the ball Nottingham equalised with a well taken goal leaving the York keeper no chance making it 1-1 midway through the first period.

With Nottingham buoyed by the equaliser the game started to open up but great defensive work from Simeon Hopkinson, Tom Eaton and Luke Jones kept the Nottingham attacks at bay, while Jimmy Gore, Elliot Oliver and Declan Simpson were fighting hard in midfield to feed the York attack.

The second period started at a frenetic pace with Nottingham taking the lead in the first minute with some nice one touch passing making it 1-2. With Nottingham now keeping a high line and going for more goals a sublime pass from Declan Simpson saw Will Jarvis beat the offside trap and after a great run fired low and right from 15 yards to beat the on rushing Nottingham keeper with a terrific equalising shot.

Within minutes of the restart a tackle by Elliot Oliver released Declan Simpson who provided another sublime inch perfect pass for Will Jarvis who with lightening pace again beat the offside trap and calmly fired home to make it 3-2.

York were now controlling the game with some great one touch passing from the back through midfield and after a great run from Alex Kemp down the left providing the assist for Will Jarvis to bag his hat trick making it 4-2. In a great five minute spell of possession it was Josh Hall turning provider after a darting run through the heart of the Nottingham midfield setting up Will Jarvis to claim his fourth goal of the game with a sublime finish that left the Nottingham keeper stranded, making it 5-2. The York defence of Simeon Hopkinson, Liam White and Luke Jones held strong under some Nottingham pressure and York keeper Nathan Storr had to be alert from a long range effort from the Nottingham midfield that he magnificently tipped over the bar.

Nottingham applied more pressure in the third period down the flanks looking for more goals; but some great defending from Alfie Evans and Liam White snuffed out the Nottingham attacks and limited them to only two shots, York could have added to their total but for some great saves from the Nottingham keeper denying efforts from Josh Hall, Luke Jones and Will Jarvis.

Man of the Match was deservedly awarded to Will Jarvis for his outstanding attacking display.