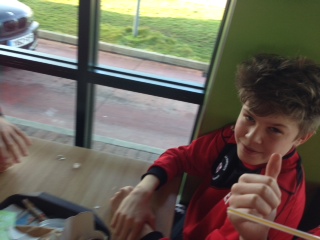 A comfortable win for York U15s with Elliot Fenton bagging his second consecutive  man-of-the match award. Goals for Adam Wilson 2, Will Hall and Niall Smallwood. That puts York top of the league with 3 home league games to play against Middlesboro, Bradford and Sheffield. With Sheffield losing to Middlesboro it will be an exciting end to the season.

York Schoolboys Under 15s are top of the Yorkshire league after an impressive 4-0 win away at SpenValley.

York were afforded plenty of space in midfield which was put to full use by Alex Wilson and Elliot Fenton who between them controlled possession and prompted a series of attacks both through the middle and down the flanks.

However, having played some tidy football it was from an almighty goalmouth scramble that the visitors eventually took the lead. Spen failed to clear a corner kick and after several attempts at goal the ball fell to Will Hall who made no mistake from close range.

It then looked a matter of time before York struck again and they duly doubled their advantage when man of the match Fenton released Adam Wilson with a brilliant defence splitting pass and the prolific striker drew the keeper before slotting into the bottom corner.

York changed formation second period with slope advantage but continued to boss proceedings which soon brought about a third goal to effectively end the contest. This time it was Niall Smallwood who found the target with a firm strike from inside the penalty area.

By now the home team were offering little resistance as York poured forward and after George Brown, Sam Drake and Cameron Herd all came close to adding to the score line it was Adam Wilson who grabbed his second and York’s fourth as he met a corner kick to volley past a stranded keeper.

York could have added further goals only to be foiled by some last ditch defending but the result boosts their goal difference with just home fixtures against Middlesbrough, Sheffield and Bradford to play as they enter the closing stages of the season.