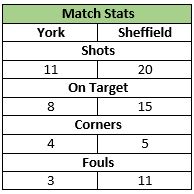 York U12 Schoolboys crashed to defeat in their opening league game of the season to a strong and motivated Sheffield side.

The game started with Sheffield in the ascendancy forcing a fine save from Adam hunter in the second minute.   York couldn’t’ get out of the starting blocks and were pinned back in their own half in the early exchanges mustering only a tame shot after 5 minutes of play.  It was from a corner in the eleventh minute where York failed to clear their lines that Sheffield opened the scoring.

This seemed to spark York into life and a right wing delivery from Josh Hall was met by Will Jarvis to put York back on equal terms within a minute of going 1-0 down.

York then started to put some passes together and were in the game going into the end of the first period.

Sheffield were back in front within a minute of the re-start catching York asleep and continued to be dominant with York second best in the 50/50 ‘s and unable to string passes together made it easy for Sheffield who then increased their lead to 1-3 midway through the second period.

Again within a minute of the third period Sheffield added to their tally with another goal making it 1-4, and as York struggled to contain the Sheffield lone striker, they added another two goals to make the final score 1-6.