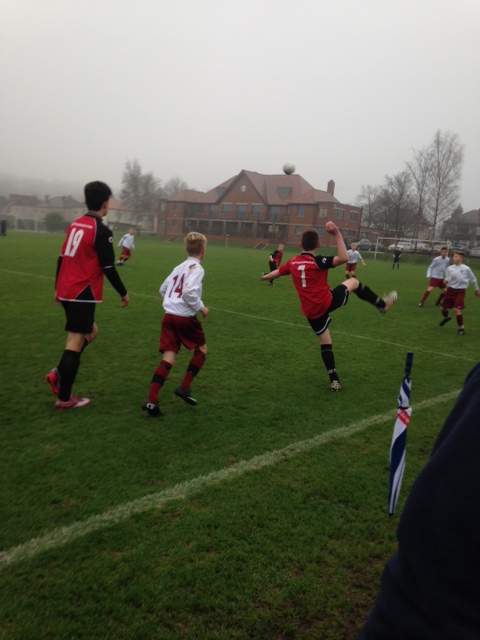 York Under 13 travelled to Sheffield for the 3rd Round of the ESFA Cup. With York having beaten Sheffield earlier this season in a friendly the hosts were desperate for revenge, which they got ,with an 8-2 victory and subjected York to their first competitive defeat of the season.

York started brightly and enjoyed a lot of early possession with Rob Guilfoyle and Dom Jackson going close. Unfortunately the York pressure didn’t produce a goal and Sheffield started to grow in confidence as the half progressed clipping the bar with an effort from 20 yards.

Sheffield then took the lead, a cross from the left is headed home by the advancing right back to go 1-0 up.

York responded, and on the stoke of half time crafted the move of the half with fantastic one touch football opening up the Sheffield defence only for the Sheffiled keeper to make a great save from a Rob Guilfoyle strike.

The second half saw Sheffield start very strongly with York struggling to cope with the pressure,  and within ten minutes of the second half starting York found themselves 4-0 down.

A shell shocked York started to recover and won a penalty when Joe Crosby was brought down in the box, with the resulting penalty been despatched by Rob Guilfoyle.

York refused to give up and a neat turn and pass by Charlie Ward finds Joe Crosby who’s shot is saved at full stretch with the rebound falling to Dom Jackson to make it  6-2.
With ten minutes left York throw everything at Sheffield but suffer another two counter attacks to make the final score 8-2.