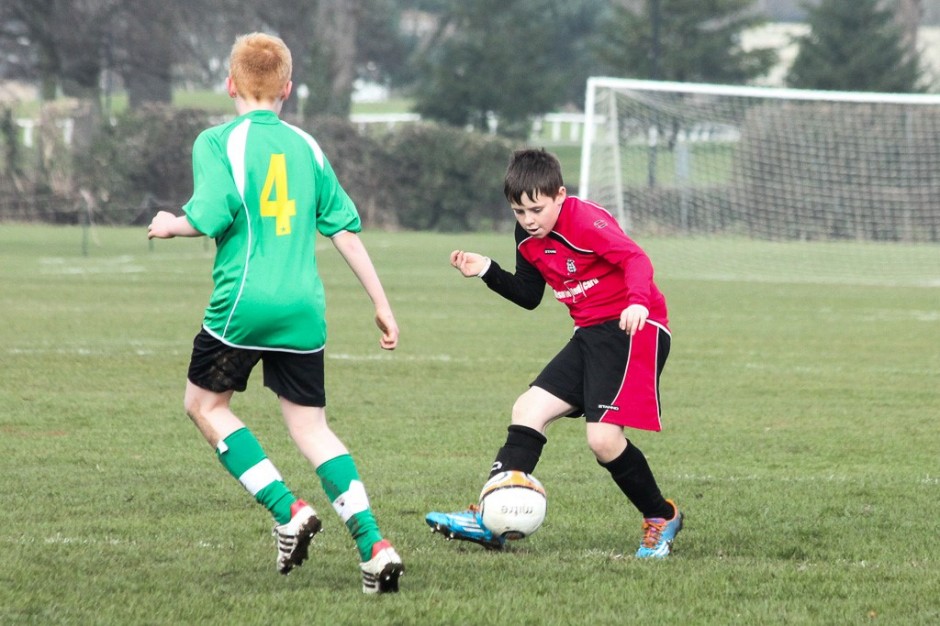 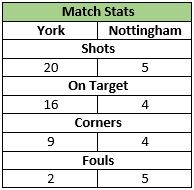 York U12 Schoolboys returned to winning ways in style with an emphatic win over Nottingham.  After losing their first two league games and a seven week lay-off York started the game battling in midfield with Elliot Oliver, Liam White, Harvey Stephenson and Declan Racher soon controlling the midfield area closing down Nottingham and passing the ball well.  In the 6th minute Declan Racher forced the first save from the Nottingham keeper who could only put the ball behind, giving York the first of many corners.  Although York couldn’t capitalise from the corner, good pressure from York’s midfield kept Nottingham in their own half and a low cross from the left delivered by Harvey Stephenson found Declan Racher in the box, who neatly dribbled round the defender and the on rushing Nottingham keeper to calmly slot the ball into the net making it 1-0 to York on 7 minutes.

From the kick off Nottingham had their first attack as York pushed forward; but the Nottingham striker came off second best one on one with Luke Jones who snuffed out the danger forcing the ball out for Nottingham’s first corner.  York were defending high up the pitch with the defence of Tom Eaton, Alfie Evans and Luke Jones supporting midfield, York were passing the ball calmly around the pitch forcing another corner and shots on target from Elliot Oliver, Luke Jones and Declan Racher.  In the last minute of the first period a stunning shot from Elliot Oliver was tipped onto the underside of the crossbar by the Nottingham keeper, with Will Jarvis to the first to react to the rebound pushing the ball past the Nottingham keeper to make it 2-0 to York at the break.

York started the second period in the ascendancy with debutante Connor Teal and Bankole Claudius- Cole making an impact down the wings. A rare Nottingham forage into the York half in the 23rd minute produced their first shot on goal which was comfortably saved by Nathan Storr.  With another York Schoolboy debutante Leo Potts, Will Jarvis and Declan Racher forcing saves from the Nottingham keeper and Luke Jones going close, York could not add to their tally despite having the majority of possession and playing some great passing football, the score remained 2-0 at the end of the second period.

The third period started with Nottingham on the attack but the back three of Simeon Hopkinson, Alfie Evans and Liam White calmly dealt with any danger delivering the ball back the York midfield.   It was in the 47th minute when a Nottingham attack was broken down, with York playing from the back the ball arrived at the feet of Will Jarvis who, after running down the right flank and beating the Nottingham left back, fired in a low cross which was met at the back post by Bankole Claudius-Cole who neatly finished off the move making it 3-0 to York. Another flowing move four minutes later saw Harvey Stephenson play in Will Jarvis who calmly finished to get his second of the game to make it 4-0 to York.  Nottingham were still battling and but the York defence and Keeper were up to anything that Nottingham could throw at them and in the closing stages of the game another flowing move saw Will Jarvis turn provider once more for Declan Racher to claim his second goal of the game to make the full time score 5-0 to York.

Managers Comments (Andy Eaton / Nigel Kemp): After a long period with no fixtures, our boys looked extremely comfortable and completely in control of the game throughout. All looked calm and played a great passing game, dominating all areas of the pitch. Really pleasing for the whole team and York supporters.