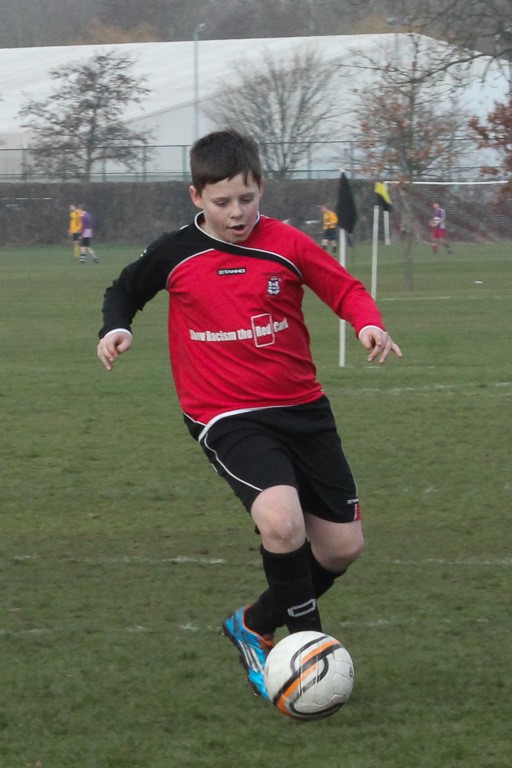 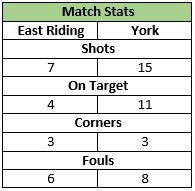 York U12 Schoolboys travelled to East Riding for their final league game of the season. York started the brighter of the two sides forcing a corner in the first minute, a floating cross delivered by Elliot Oliver which Luke Jones rose above the defence; buy his header lacked power and was easily saved by the East Riding keeper. A long punt up field saw East Riding on the counter attack with the bounce catching the York rear guard out on the right wing for the East riding forward to drive in a cross that was well taken and converted by East Riding putting them 1-0 up inside the second minute.

A stunned York responded with some great play by the midfield of Harvey Stephenson, Leo Potts, Elliot Oliver and Alex Kemp; but with East defending deep and in numbers York struggled to find the quality last pass their play deserved. With East Riding employing the long ball York’s defence of Alfie Evans, Liam White and Luke Jones had to be alert to the threat and dealt with it admirably. York pushed for the equaliser but York’s attack led by Conor Teale found it difficult to break down the East Riding defence. Another corner delivered by Elliot Oliver into the East Riding box caused their defence some problems and when the keeper could only parry away a tame shot Luke Jones was the first to react to smash the ball into the back of the net from point blank range giving York their deserved equaliser.

York were now controlling the game and shots from Elliot Oliver, Leo Potts, Simeon Hopkinson and Declan Racher were well saved by the East Riding keeper to keep the scores level at the break at 1-1.

York started the second half in the ascendancy and some great passing play along the frontline could not find a way through the East Riding defence until Leo Potts laid the ball back to Liam White who jinked through three defenders on the edge of the area to fire a left foot shot passed the East Riding Keeper to put York in the lead making the score 1-2 within two minutes of the restart.

But within minutes East Riding were awarded a dubious penalty when their forward went down in the area as Luke Jones Shepherded the ball back to Joseph Hodge in the York goal who came to collect the ball, who were both adjudged to have sandwiched the forward.

York Keeper Joseph Hodge was unlucky as his heroic attempted save came back from the underside of the crossbar crossing the line putting East Riding level at 2-2.

Managers Comments (Andy Eaton / Nigel Kemp/ Alan Oliver): Well done to all the lads, a privilege to watch, played some good football in difficult conditions. York again looked well organised and had the better of the play in a very entertaining game. The team are playing some good passing football and were unlucky not to get a well-deserved win on this occasion.

Man of the Match was awarded to Liam White