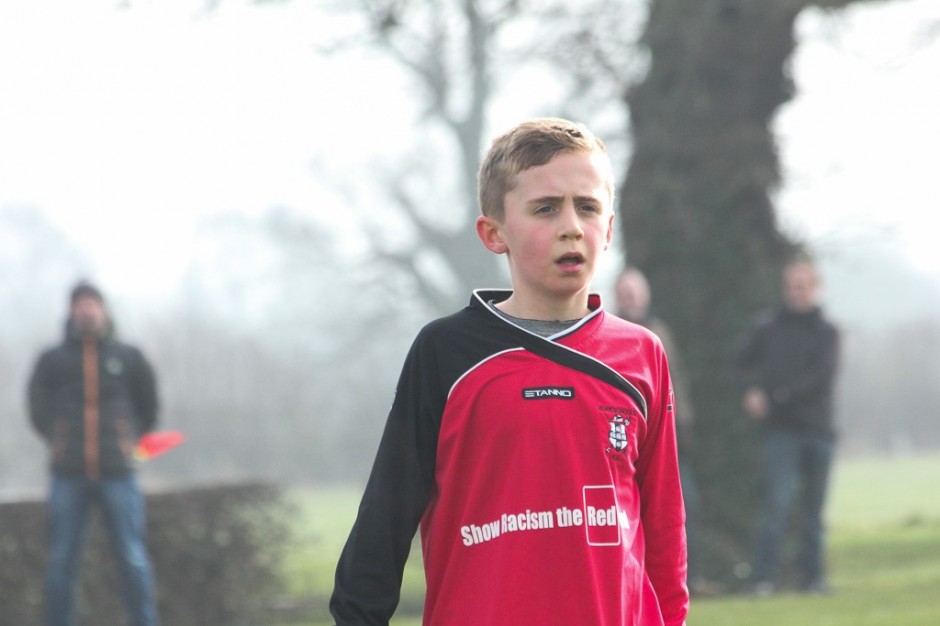 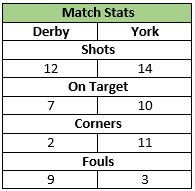 York U12 Schoolboys travelled Derby for the next round of the Michael Dale Trophy, having completed all their league fixtures.

The whistle not only signalled the start of a great game of football from both teams but also the blustery winds and driving rain.  With York kicking off the proceedings with Liam White, Elliot Oliver, Harvey Stephenson and Bankole Claudius-Cole passing the ball well in midfield it was York who carved out the first opportunities of the match with Elliot Oliver and Harvey Stephenson forcing saves from the Derby keeper within the first two minutes.  More pressure from the York forced, what was to be the first of eleven corners, this was delivered by Liam White where after a bit of a scramble on the greasy pitch was cleared by the Derby defence.  With Derby employing a 4 man defence York struggled to find the “killer” pass that would unlock the Derby defence.

Derby in turn were trying to catch York on the break but defenders Simeon Hopkinson, Luke Jones and Tom Eaton were in no mood for charity and deftly tidied up.  The game ebbed and flowed with both teams battling against the elements as well as each other and it was in the twentieth minute when Derby found a way through the York defence with a through ball to the attacker who rounding on York keeper Nathan Storr buried the ball into the net to give Derby the lead.

York continued to press Derby with Connor Teale leading the line but for all their pressure they couldn’t find a way through the Derby defence who were resolute in their defending blocking a shot from Elliot Oliver and watch a Liam White shot sail narrowly over the bar, with the first half ending 1-0 to Derby.

With York now having the slight advantage of the cross wind in the second half, pressed Derby from the off and a great pass from Simeon Hopkinson across the right flank released Connor Teale who splitting the Derby defence coolly slotted the ball to the right of the advancing Derby keeper to put York on level terms within 2 minutes of the restart.

Buoyed by the equaliser York were in the ascendancy and searched for the winning goal forcing two corners in quick succession but the York players could latch onto the corners delivered by Elliot Oliver.  With shots from Elliot Olive, Liam White and Connor Teale it wasn’t until midway through the second half that Derby had a sight of goal but the shot was comfortably saved by York Keeper Joseph Hodge.

With less than 8 minutes remaining York were unlucky not to get the goal their play deserved as Luke Jones saw his glancing header narrowly pass the left upright from a driven corner delivered by Elliot Oliver.  With York pushing for the winner a late break by Derby saw them have the last attack of normal time as the resulting was shot saved by Joseph Hodge, taking the game into extra time.

The first period of extra time saw Derby, with the slight wind advantage, on the attack but found Nathan Storr in fine form to keep out the Derby attacker.  It was time for York to show their mettle and soak up a period of Derby pressure, which they did convincingly with the defence playing the ball to the hard working midfield and attack but found Derby a hard defence to crack leaving the scores still level after the first period of extra time.

With York now having the slight advantage with the elements in the second period of extra time York pushed for the winning goal but couldn’t find a way through the Derby defence and even a late corner delivered by Elliot Oliver eluded the York attackers leaving the score 1-1 with the game now going to penalties.

Luke Jones was the first to step up to the spot despatching his penalty high into the roof of the net 0-1 to York.
Joseph Hodge managed to get a hand on Derby’s first but the shot was too strong 1-1.
Tom Eaton hitting low and right underneath the diving Derby keeper 1-2.
Joseph Hodge again managed to get a touch on Derby’s second but again the shot just too strong to be kept out 2-2.
Conner Teale up next powering his shot to the left 2-3.
Derby duly despatched their third 3-3.
Simeon Hopkinson driving his penalty right 3-4.
Derby’s fourth hit hard but high in the blustery wind sailing over the bar 3-4.
Harvey Stephenson stepped up for York’s fifth penalty a calmly driven shot to the right putting York through to the next round 3-5 on penalties final score 4-6.

Managers Comments (Alan Oliver): Well done to all the boys who all had to battle really hard in very difficult conditions of wind and rain.  The boys all stuck to their moto of playing good football which was great to watch.  They were unlucky not to win in normal time and are starting to realise just how good they are and how well they can do.

Man of the Match was awarded to Elliot Oliver