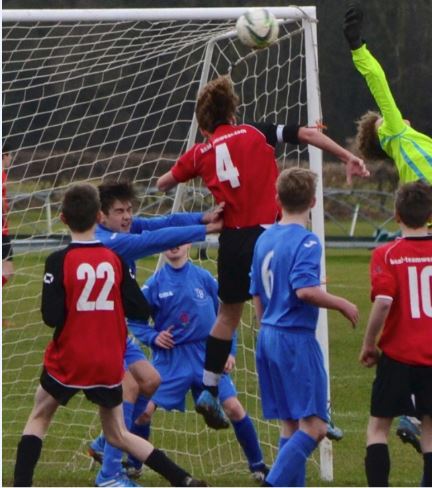 York Schoolboys Under 13’s today entertained Leeds and with both teams unbeaten in the league this season, this was a crucial game for both sides.

As with previous weeks York started slowly and the early pressure was applied by a lively Leeds team, but then on 5 minutes York striker Joe Crosby weaved his way between two Leeds defenders only to be brought down in the area to win a penalty, which was confidently dispatched by Danny Allinson  to make the score 1-0.

Leeds responded well and attacked in numbers but the York defence stood firm. York now had to be content with trying to hit the Leeds defence on the break with the best chance falling to Rob Guilfoyle who latched onto a through ball from Mani De Nobriga only to see his shot go narrowly over the Leeds crossbar.

Again Leeds kept coming forward and manage to force an outstanding save from York keeper Patrick Randall low down to his right keeping the score 1-0 to York at half time.

York started the second half on the front foot with Dominic Jackson & Lucas Wilson firing shots straight at the Leeds keeper. This was now an end to end encounter with Leeds pushing for the equaliser and good clearances from Ollie Smith and Jamie Higginbotham maintained York’s slender lead.

On 50 minutes York increased their lead following a corner which was cleared by the Leeds defence straight to Lucas Frankish who’s well controlled pin point cross picked out Lucas Wilson who headed home from 8 yards to make it 2-0.

Again Leeds rallied and from a short corner routine reduced the York lead with a glancing header. This lead to a nervy last 10 minutes for York, especially when Leeds hit the post following a fine strike in the last couple of minutes but York held on to post a 2-1 victory to maintain their 100% league record.