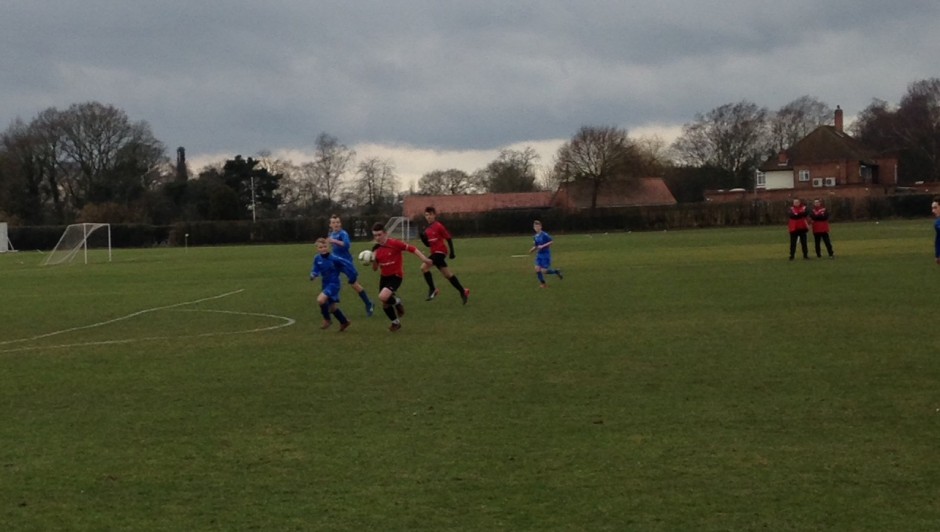 York Schoolboys Under 13’s today entertained Harrogate in the quarter finals of the West Yorkshire Cup, knowing this was going to be one of their biggest tests of the season so far.

Harrogate’s best chance of the first half came following a mix up in the York defence which resulted in Ollie Smith clearing the ball off the line to keep the scores level. This seemed to stir York into action and they started to take control of the midfield with Danny Allinson & Charlie Ward getting the upper hand on the Harrogate midfield which allowed runs from the wide men of Charlie Jebson King and Dom Jackson to create goal scoring opportunities. Charlie Ward was then fouled following a weaving run from midfield, Lucas Wilson’s free kick forced the Harrogate keeper to make a good save.

York were now starting to create the better chances with Rob Guilfoyle shooting straight at the keeper before Manni De Nobriga broke the offside trap to shoot past the advancing keeper, only for his shot to rebound off the Harrogate upright.

As the second half started York continued to create chances with Manni De Nobriga narrowly shooting wide. Harrogate then took the lead against the run of play with superb strike from 25 yards giving York keeper Harry Griffiths no chance in the York goal.

York responded well to the set back and created 3 or 4 more good chances with Manni De Nobriga forcing good saves from the Harrogate keeper on every occasion. York then equalised with a cross from De Nobriga been converted by Rob Guilfoyle, tapping home from close range.

The game was now open with both teams playing entertaining attacking football creating chances at both ends, then with a minute to go to Charlie Ward played a defence splitting pass allowing Joe Crosby to run through and hit a first time shot into the bottom corner of the Harrogate goal sparking scenes of celebrations on the pitch and on the touchline.

Unfortunately this joy was short lived as with less than 30 seconds remaining and straight from the kick off the Harrogate midfielder charged straight through the York midfield to hit an unstoppable shot from 25 yards again sparking scenes of celebrations in the Harrogate camp to make it 2-2 at full time.

As extra time started, Harrogate started on the front foot and regained the lead in the first half of extra time and then increased their lead in the second half with a late penalty to make the final score 4-2.

This was a crushing defeat for York and conceding the late goal at the end of normal time seemed to deflate the York players whilst lifting the Harrogate players.

We could not have asked for any more from all the players, again they did not seem to get the little bit of luck they deserve, the lads all gave 110% and were magnanimous in defeat they were a credit to themselves, their parents and the district.