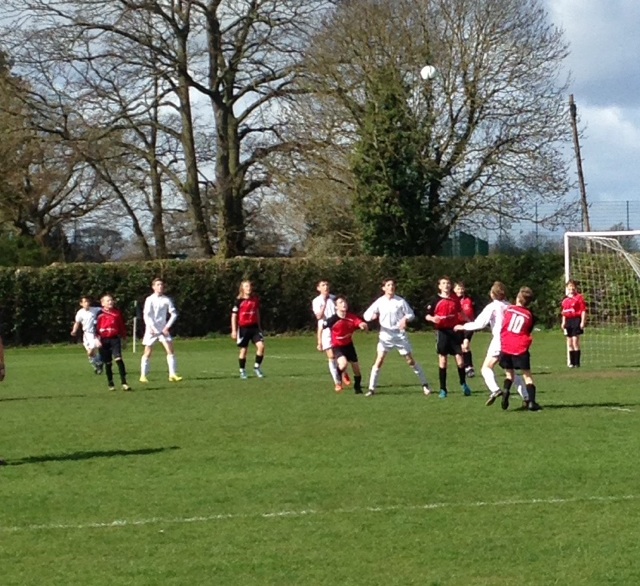 York Schoolboys Under 13’s returned to league action today with a difficult home fixture against East Riding, with York needing to bounce back following their narrow defeat to Sheffield prior to the Easter break.

However the opposition struck the first blow on five minutes, when following a corner the East Riding player rose unchallenged to head home. On twenty minutes East Riding doubled their lead following a series of missed tackles allowing East Riding to score from 20 yards.

The big physical presence of the East Riding players were controlling the midfield area and York were finding it hard to find a pass, they were second to the ball in all areas of the pitch which wasn’t allowing the forwards to trouble the East Riding goal.

York were then thrown a lifeline on the stroke of half time when Danny Allinson won the ball in midfield slotting Rob Guilfoyle in to score with a left foot strike to make the score 2-1.

York changed to a 4-5-1 formation in the second half to try and get a foothold in the midfield area, this had an immediate effect with Charlie Ward and Dom Jackson having shots saved by the East Riding keeper following good work by Lucas Wilson and Charlie Jebson King.

York now had East Riding pinned in their own half with the York defence of Charlie Buckle, James Hanson, Jamie Higginbotham and Will Anderson coping with the few attacks that East Riding could manage.

York kept applying the pressure and drew level with ten minutes remaining, winning a 50/50 ball in midfield with Joe Crosby’s pass to splitting the East Riding defence to allow Charlie Jebson King to fire across the keeper into the bottom corner of the net.

This was the break York needed and five minutes later they took the lead in similar circumstances to the second, but this time Rob Guilfoyles pass found Charlie Jebson King running in from the left hand side to strike first time into the bottom corner to make it 3-2.

Following the kick off East Riding rallied and created their best chance of the half only to see Nick Hutton make a last ditch goal line clearance.

York finally secured the win following a quick break from defence finding Crosby who’s through ball allowed Manni De Nobriga to race through and calmly slot past the advancing East Riding keeper to make the final score 4-2 to York.

This was a hard fought victory, and following the first twenty minutes of the game we couldn’t see where the victory was coming from, but again, great credit goes to all the lads who again showed great character to bring themselves back from a poor start to record a hard fought victory, which keeps our league title hopes alive.