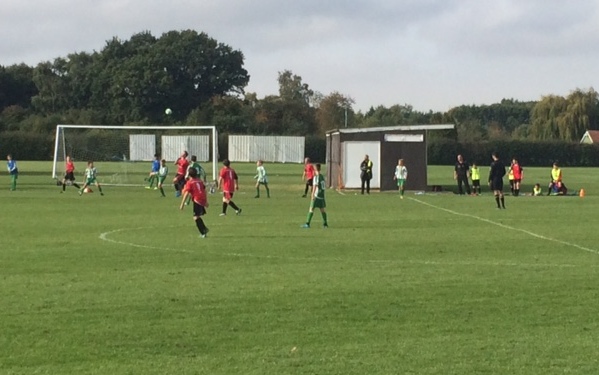 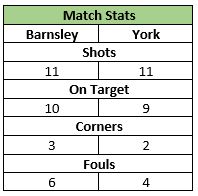 York Schoolboys U13s travelled to Barnsley for the first friendly of the season.  Both sides started brightly on a damp and wet morning, when in the 4th minute Luke Jones winning the ball inside the Barnsley half hit a sweet half volley from 25 yards, that was still rising as it flew into the roof of the net, putting York on the front foot at 0-1.

This seemed to have more of a positive impact on the home side as Barnsley started to take control of the game, with Leo Potts, Harvey Stephenson, Elliot Oliver and Connor Teale battling hard in the York midfield containing Barnsley, but in the 7th minute a floated Barnsley free kick into the box eluded the York defence where the Barnsley striker was on hand to put the game back onto level terms at 1-1.

With the game end to end a 10th minute York free kick taken by Alfie Evans found Luke Jones, with some great interplay with James Hymers, and dribbling into the box saw his resulting shot well saved by the Barnsley keeper.  Barnsley then had their best spell of the game pushing York hard; but found the York defence of Jacob Caringella, Ben Calam, Sid McCoy and Alfie Evans in fine defensive form and difficult to break down.  York had Joseph Hodge to thank for a string of great saves in 13 minutes of relentless pressure from Barnsley.  Some respite came with a seemingly rare York attack when a shot by Leo Potts was again well saved by the Barnsley keeper, before Barnsley intensified their search for another goal.  York’s defence and midfield dug deep to keep Barnsley at bay, and when they found their way through Joseph Hodge was on hand making more terrific saves, with York indebted to Joseph Hodge for a superb double save on the stroke of half time to keep the score even at 1-1.

Barnsley started the second half with belief and again forced another marvellous save from the York keeper, Joseph Hodge, within 2 minutes of the restart.  After soaking up the Barnsley early pressure York’s midfield of Liam White, Elliot Oliver, Alex Kemp and Harvey Stephenson were now in the ascendancy a shot from Alfie Evans smashing the crossbar turned the tide.  Another shot, this time from Liam White was tipped onto the crossbar by the Barnsley keeper as York now found their stride playing some fluent passing football.  An Alex Kemp free kick found Leo Potts who passing to the on-rushing Luke Jones fired a cross goal shot low to the left hitting the inside of the post and the back of the net putting York in the driving seat at 1-2. With Liam White, Alex Kemp and Luke Jones causing havoc in the Barnsley defence, another stinging shot from Alex kemp struck the woodwork.  York had Leo Jones to thank for some great defensive work snuffing out a Barnsley counter attack before Luke Jones was put through by Elliot Oliver on the halfway line and with an electric run made no mistake when, one on one with the Barnsley keeper drove the ball low to the right of the on rushing keeper to claim his hat trick and put York 1-3 up.

Another skilful run from Liam White brought York a free kick on the right hand edge of the penalty area, and on his favoured left foot, he curled it low to the bottom right corner to put York 1-4 up at the final whistle.

Managers Comments (Alan Oliver / Nigel Kemp / Neil Stephenson): We made changes for the 2nd half: Connor Teale into right back, Ben Calam played left back and Sid McCoy Sid a great 2nd half, holding the defence. A great second half team performance, the lads showed real character, skill and determination in what was a convincing win in the end. We now need to carry on the momentum in our next fixture away at Nottingham.

Man of the Match was awarded to Luke Jones