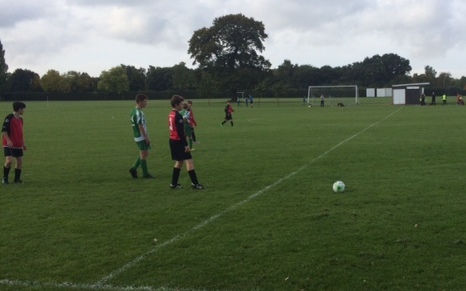 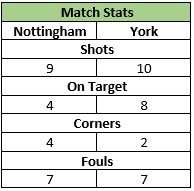 York U13s Schoolboys had a long early morning journey to Nottingham to play in the West Yorkshire Cup.

The game started at frenetic pace with Elliot Oliver, Connor Teale, Alfie Evans and Liam White winning the ball from the kick off and with some great combination play feeding Luke Jones one on one with the Nottingham keeper, who pulled off a great save diving to his left to keep York out in the first minute.

This was York’s signal of intent as York surged forward with some great passing football that paid dividends when a free kick delivered by Elliot Oliver was pounced upon by Harvey Stephenson, after Nottingham failed to clear their lines, who running across the box hit a sweet low shot beyond the diving Nottingham keeper into the far corner putting York in command of the tie at 0-1 in the sixth minute.

Sid McCoy, Leo Jones, Ben Calam and Jacob Caringella in the York defence held a tight line and were resolute in their tackling, keeping the Nottingham attacks at bay, with Joseph Hodge called into action for the first time in the 14th minute to comfortably save Nottingham’s first shot on target.

With the play end to end York looked dangerous on the attack with Liam White testing the Nottingham keeper from range with a stinging shot before saving well again, this time from Harvey Stephenson. With York Comfortable on all fronts a Nottingham corner was dealt well by the York defence playing through midfield before Elliot Oliver laid on a great ball for Luke Jones who drove his 18 yard shot down the centre underneath the diving Nottingham to put York 0-2 up going into the break.

Nottingham started the second half brighter, determined to pull a goal back early on but with Olly Hanley and Leo Jones making great last ditch tackles and Sid McCoy and Jacob Caringella standing firm Nottingham were unable to test the Joseph Hodge in the York goal.York’s attacking pairing of James Hymers and Luke Jones combined for the former to see his shot tipped acrobatically around the post.  Nottingham were pushing high up the field in search of the elusive goal that would put them back in the tie; but with York’s midfield helping out the defence they found it difficult to test the York keeper with Joseph Hodge saving comfortably any loose balls.

York looked dangerous on the counter attack with James Hymers and Luke Jones again testing the keeper.  But for the Nottingham central defenders and keeper the score could have been more to York with the final score 0-2 putting York through to the next round.

York now stretching their winning run to four games, confidence is high as they get back to league action next week at home to Scarborough.

Managers Comments (Alan Oliver / Nigel Kemp / Neil Stephenson): Well done to all the lads. A great performance by all the team. Great team spirit on and off the pitch. Good banter on the coach, carry on what you are doing, believe in what you are doing. You are getting stronger every game.  A very special Thank you to Olly Hanley for stepping in at short notice again. A great performance. Well done!

Man of the Match was awarded to Sid McCoy