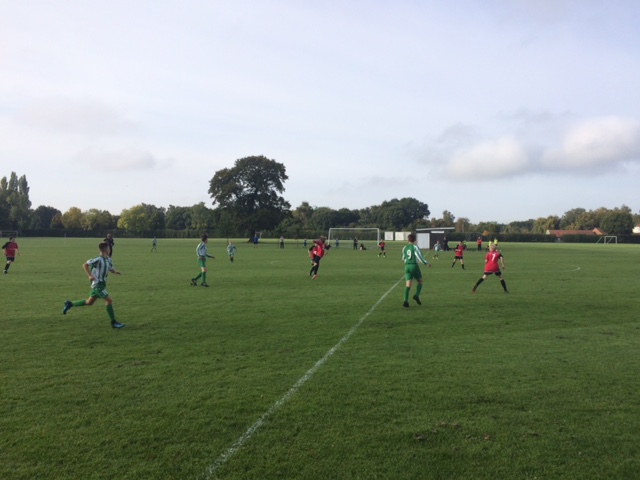 York Schoolboys U13s got back in action with an important friendly away against Hambleton & Richmond, which gave the team a much needed run out before a string of league games.

York signalled their intentions when Connor Teale powered in a low shot that was blocked by the Hambleton defender, and Luke Jones driving to the right by-line cutting a back a pin point cross for Leo Potts who struck it too sweetly on the volley as it smashed onto the bar, within the first minute.

York dominated the early possession as Elliot Oliver combined with Liam White in midfield who forced a save from the Hambleton keeper. The 5th minute saw Hambletons first attack which saw Jacob Caringella substituted after taking a knock with Olly Hanley coming on at left back as a replacement. Hambleton rarely troubled the York defence of Leo Jones, Olly Hanley, Alfie Evans and Ben Rhodes; but for all the pressure York put Hambleton under their defence was big and strong and at the halfway mark the score was all square at 0-0.

A free kick delivered by Alfie Evans found Elliot Oliver, who released Harvey Stephenson down the right wing and after driving to the edge of the box hit a stunning strike that left the home sides keeper no chance, putting York into a deserved 0-1 lead. This seemed to be the turning point for Hambleton as they grew into the game with their midfield retaining possession but they too struggled to trouble the York defence as the game ebbed and flowed as both teams seemed to lack the final pass to unlock the defences. Ben Calam had chances to increase York’s lead but Hambleton defended in packs to snuff out the shot.

It was in the 54th minute when a slide rule pass by Leo Potts found Luke Jones on the overlap on the left wing as he drove to the bye-line it seemed as though he had run out of pitch but with a curling left foot shot, caught the keeper unawares as the ball passed through his outstretched arms into the back of the net putting York two to the good.

From the kick off Hambleton had the ball in the back of the net from an in-direct free kick, with York having the alert Joseph Hodge, who had been a relative by-stander for most of the game, to thank as the Hambleton forward hit a beautiful curling shot over the top of the York wall, that Joseph watched as no one had managed to get a touch on it, so the goal was disallowed.

Hambleton had a late flurry of attacks that saw Joseph Hodge called into action for the first time, three minutes from the end but the York defence and keeper were never really troubled and the game ended 0-2 to York.

Man of the Match was awarded to Leo Jones