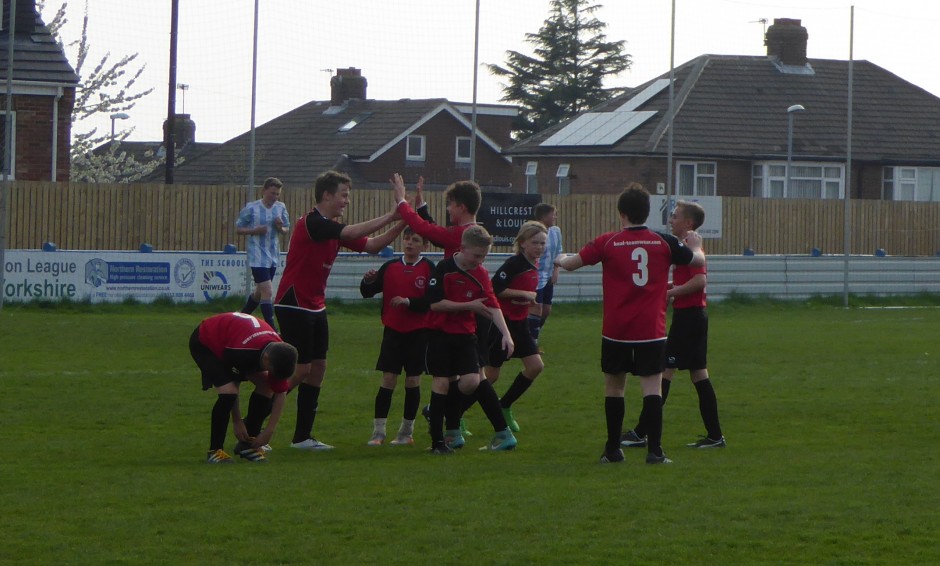 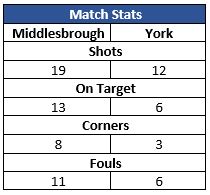 York U14s kicked of their season with a trip up the A19 to play Middlesbrough in a pre-season friendly. It was Middlesbrough that started preceding’s on a blustery day kicking off into the wind.  The back four of Luke Ryder, Luke Jones, Leo Jones and Olly Hanley looked comfortable early on and after snuffing out Middlesbrough’s first attack a long ball delivered over the top of the Boro’s defence was chased down by debutante Edward Hammond who taking on the keeper one on one calmly slotted into to the right side of the on-rushing Boro keeper giving York a dream start putting them 0-1 up in the second minute.

From the re-start Boro were straight on the attack with Joseph Hodge bravely diving at the Boro’s forward feet and was called into action in the 7th minute pushing the ball around the post.  A free kick delivered by Leo Jones deep in his own half was met by Luke Jones who narrowly shot wide.

The game was end to end with both teams creating chances, Yorks midfield of Ben Calam, Elliot Oliver, Harvey Stephenson and Liam White were playing some great passing football with Edward Hammond and Dan Barker working hard up front; but Middlesbrough’s back line and midfield worked hard to keep York at bay.

In the 15th minute a Middlesbrough corner delivered into the box caught York napping and the resultant shot eluded all the players in the crowded box to put Middlesbrough level at 1-1.  York hit back with a shot from Ben Calam, that was caught by the wind taking it wide.

With both teams experimenting with line ups and positions it was York who made the first substitutions with Roscoe Dawson coming on at right back and Charlie Fort up front; but it was York keeper Joseph Hodge, who after a great save, released the ball to Luke Jones playing a 1-2  with Elliot Oliver in midfield released the ball down the central channel, which was chased down by Edward Hammond driving through the two centre backs struck a sweet shot mid right of the goal putting York back on the front foot at 1-2 in the 23rd minute and claiming his brace on his debut.

Middlesbrough responded immediately from the kick off with Joseph Hodge saving well within minutes of the restart. York pressed for another goal with Luke Jones unlucky to see his 25-yard free kick rebound off the underside of the crossbar and cleared by the Boro defence, and Harvey Stephenson’s shot saved in the dying minutes of the first half making the half time score 1-2.

Middlesbrough made changes for the second half and playing with the wind put York under early pressure with Yorks defence of Roscoe Dawson, Leo Jones, Olly Hanley working hard to restrict Middlesbrough to long range efforts.  In the 40st minute, Boro were awarded a penalty, when York midfielder Harvey Stephenson helping out the back four caught the standing leg of the Boro forward, who made no mistake sending York keeper Nathan Storr the wrong way putting Middlesbrough back level at 2-2.   York had Nathan Storr to thank for keeping the scores level pulling off a number of fine saves.  A through ball from the Boro midfield put the strong number 9 through on goal with Nathan Storr diving to his right saving the first shot only to see the rebound land at the No 9’s feet where he made no mistake the second time to put Boro in the lead for the first time in the game in the 50th minute making the scores 3-2.

With Liam White making his now trade mark dribbles and Edward Hammond and Charlie Fort running the top line creating space, Luke Jones found the Boro keeper in great from pushing another shot around the post.  From the resulting corner, York were awarded a penalty with the Boro defender having been adjudged to been holding Yok midfielder Elliot Oliver.

Middlesbrough had their keeper to thank as he saved well from Luke Jones’s firmly struck penalty in the 53rd minute pushing it around his right upright.  Harvey Stephenson delivered a pinpoint corner on to the head of the rising Luke Jones; but his header flew narrowly over the crossbar.

A lay off from Dan Barker saw Liam White shot saved by the Boro keeper, after a dancing his way round three Boro players.  Middlesbrough pressed for another goal but found the fullbacks Roscoe Dawson and Olly Hanley resolute in their defending.  Two minor injuries saw York re-shuffle the pack and after a foul on Charlie Fort who was now running the inside right channel form midfield, gave Leo Jones the opportunity to deliver the ball into the box from the resulting free kick.  With Middlesbrough holding the line on the 18-yard box Leo’s over the top pinpoint free kick was met by Luke Jones who side footed to the left of the diving keeper putting York back on level terms at 3-3 in the 59th minute.

Both teams pushed for a winner in the last 10 minutes with York keeper Nathan Storr making some fine saves as Middlesbrough edged possession but couldn’t find a way through, York had the last chance of the game as Liam White was hauled back just inside the Boro half whilst driving through the middle; but the resulting free kick was cleared by the Boro defenders on the stroke of full time making the final score 3-3.

Managers Comments (Alan Oliver / Neil Stephenson): A great start to a tough game.  Should have been 4-1 up in the first half.  It was good to see you soak the pressure up in the first ten minutes of the second half; and to get back into the game.  As well as some great goal- keeping from the home side in the second half to keep them in the game.  Well done to all the lads who had a trial as well as the schoolboy squad.

Looking forward to the season ahead with our game away next week to Wakefield.

Man of the Match was awarded to Luke jones for all the different positions he had to play. Well done.  Outstanding and a credit to teamwork.