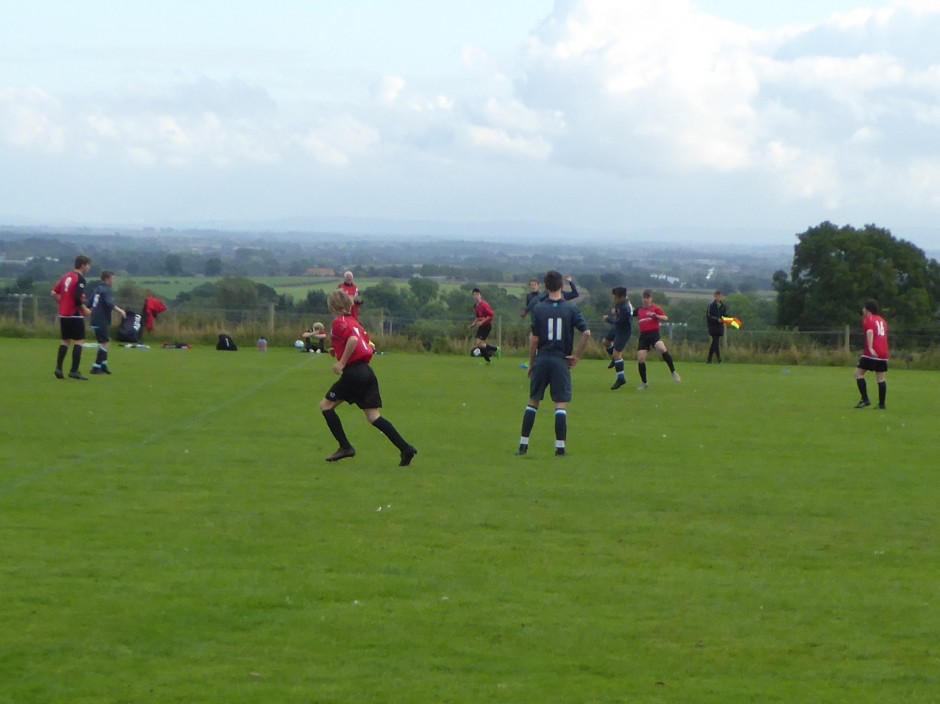 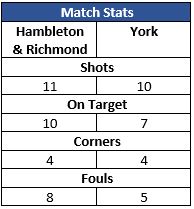 York U14s travelled to Hambleton & Richmond for their final friendly before kicking off their league campaign.  It seemed as though the “Gods” were against them as the fixture had to be reversed due to the PlusNet Marathon, and a number of road closures, including the A1M, and diversions delayed kick off by 30 minutes.

York kicked off preceding against a very strong Hambleton side add immediately put themselves under pressure, conceding a corner in the first minute, which was well defended by the York back four of Sid McCoy, Ben Fawcett, Olly Handley and Leo. With Hambleton keeping the pressure on York the back four had their work cut out with Leo Jones making some great last minute tackles on the Hambleton winger and Ben Fawcett patrolling the centre, cutting out any balls delivered into the York danger area. In the 5th minute Hambleton won a free kick 25 yards out, electing to go for goal; but the resultant shot was well saved by York keeper Nathan Storr.

Some good work in midfield by Elliot Oliver and Liam White released Charlie Fort up front and running at the Hambleton defence played in Luke Jones, unfortunately his shot was directly at the Hambleton keeper.

Hambleton had the lions share of the early play; but it was a Harvey Stephenson corner, half cleared by the Hambleton back line that fell to Ben Calam, dinking it back into the mix, found Luke Jones’ head knocking it down into the path of Liam Whites striking sweet left foot shot that was still rising as it hit the back of the net, to put York 0-1 up arguably against the run of play in the 16th minute.

With York making a number of changes Hambleton continued to have the upper hand in possession forcing a string of fine saves from Joseph Hodge with the back line of Luke Ryder, Ben Fawcett, Olly Hanley and Sid McCoy resolute in their defensive work.  In the dying minutes of the first half Edward Hammond delivered a great corner but the chance went begging as Hambleton cleared their lines leaving the half time score 0-1 to York.

Hambleton started the second half as the finished the first half, playing good football in possession and making it hard for the midfield quartet of Ben Rhodes, Elliot Oliver, Liam White and Harvey Stephenson, who worked tirelessly.  Hambleton pressure finally paid off when goal mouth scramble in the York penalty allowed the Hambleton Striker to equalise making it 1-1 in the 38th minute.

York responded almost immediately, forcing a corner, delivered by Ed Hammond over the Richmond keeper to be headed into the net by Ben Fawcett claiming a goal on his debut for York Schoolboys putting York back in front in the 41st minute. But the lead wasn’t to last long as a ball over the top was chased down by the strong Hambleton striker who coolly finished past the onrushing York keeper levelling the scores at 2-2 in the 45th minute.

Hambleton now had the wind in their sails and went searching for the winner; but with York battling hard two shots from Harvey Stephenson, one well saved by the Hamilton keeper and the other sailing narrowly over the bar, York also signalled their intent with brave keeping by Joseph Hodge and defending by Sid McCoy in a goal mouth scramble kept Hambleton at bay.

But in the 55th minute Hambleton found a way through the York defence firing them ahead for the first time from inside the penalty area making it 3-2.

York again responded and Charlie Fort and Ed Hammond running the top line for York, the latter forcing a save from the Hambleton shot stopper a minute after the restart.  It was Hambleton who eventually broke the 2-2- deadlock, again from some neat play in midfield releasing their forward who struck a sweet shot from the edge of the penalty area putting Hambleton 3-2 up in the 61st minute.

York responded again straight for the restart pressing Hambleton for their own equaliser, with the game end to end, Leo Jones broke up a Hambleton attack and started a move down the left wing with Olly Hanley and Liam White linking up well and playing Luke Jones to the by-line cutting the ball back to Harvey Stephenson on the edge of the area who still had work to do, driving into the penalty area and firing a right foot shot that sailed over the Hambleton keeper into the roof of the net to bring the scores back level at 3-3 in the 65th minute.

York had chances to pinch the game from Hambleton, with Luke Jones firing just wide and Charlie Fort having a shot blocked by the Hambleton defender; but they couldn’t make them count leaving the final score of a very entertaining game level at 3-3.

Managers Comments (Alan Oliver / Neil Stephenson): Great football played by both sides. Again the lads showed belief and determination as they did last season. Take this forward and we will have a great season.  Well done to all you are a credit to York schoolboys.

Man of the Match was awarded to Ben Fawcett.