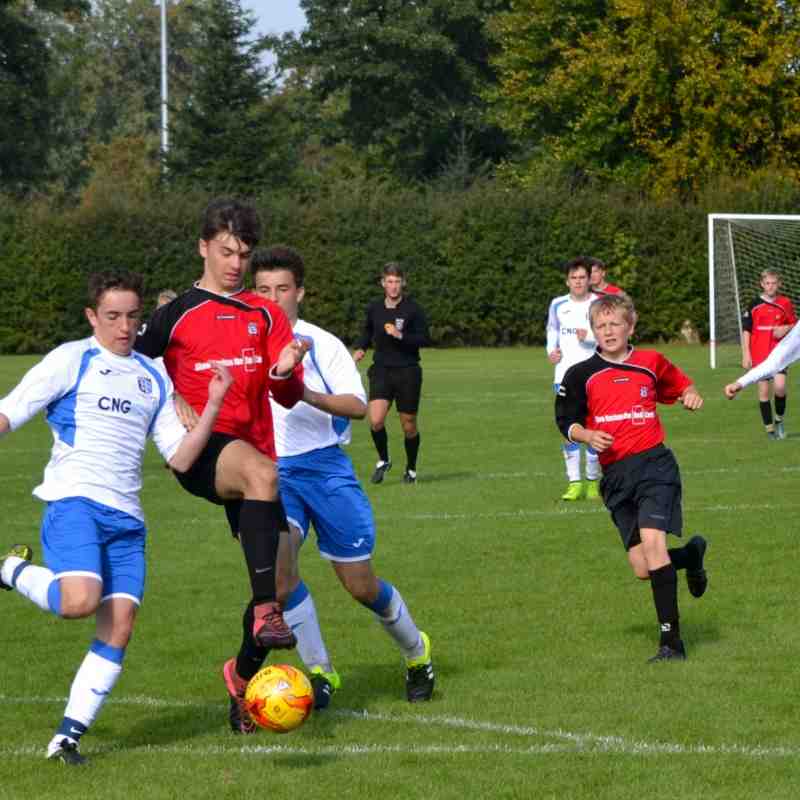 This Saturday York Schoolboys Under 15’s travelled to Humberside on a blustery cold morning to play East Riding in the Second Round of the ESFA National Cup.

As the game kicked off East Riding settled the better in the early stages, with York struggling to cope with the 3G surface and playing into a strong headwind. Resolute defending from Max Warren, Oscar Stott and Will Anderson managed to keep the East Riding strikers relatively quiet and limited them to long range strikes on goal which were comfortably dealt with by York keeper Cam Smith.

With about 20 minutes gone York broke quickly down the left flank with Tom Fleet carrying the ball out of defence, playing a ball to Manni De Nobriga who provided a first time pass into the path of Lucas Wilson who smashed the ball home from 20 yards to put York into the lead.

East Riding continued to press and were level within 10 minutes with a close-range effort.

York continued to defend deeply finding it difficult to clear their lines into a strong headwind as East Riding forced further good saves from York keeper Cam Smith.  Then with a couple of minutes to go before half time Ben Barker Spencer won the ball in midfield and played a defence splitting pass to Mani De Nobriga who fired the ball past the oncoming keeper to make the score 2-1 to York at half time.

As York started the second half with the wind behind them Danny Allinson and Josh Gover took charge of the midfield and with support from the wide players, Dan Stevenson and Ben Barker Spencer, York started to cause the East Riding defence similar problems to York had encountered in the first half. The first chance of the  half fell to York with Joe Crosby setting up De Nobriga who’s shot went narrowly wide of the post.

East Riding started to rally and a header from a corner allowed Cam Smith to produce a top class save, clawing the ball out of the top corner when everyone else thought it was a goal. East Riding then had a succession of corners and from one of these they finally equalised through a clever volley.

East Ridings lead was short lived with York taking the lead back quickly, with the game now getting stretched, Lucas Frankish started a move from the back playing in De Nobriga who’s accurate pass plays in Joe Crosby who’s first time shot found the corner of the East Riding net.

The last twenty minutes of the game were frantic with both teams creating chances but great saves from both goalkeepers meant there were no further goals, and allowing York to progress to the third round with a 3-2 victory.

This was a great all round performance against a very good East Riding side, with every York player giving their all for a very well deserved victory.