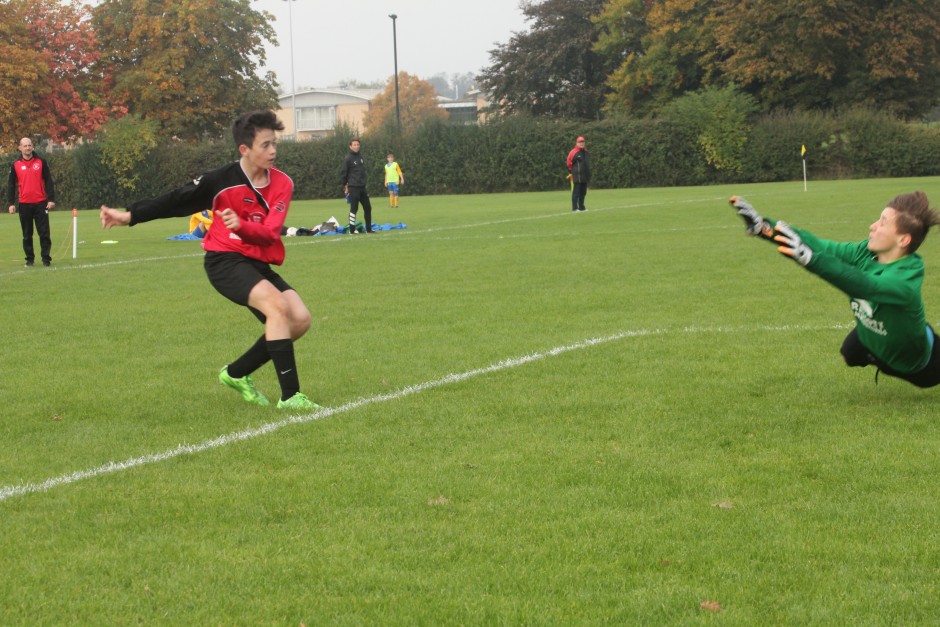 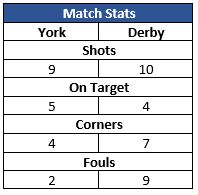 York U14s hosted Derby on a windswept morning, with Derby kicking off it was the York midfield of Elliot Oliver, Ben Fawcett, Liam White and Harvey Stephenson winning the ball putting York on the attack; but the well drilled Derby defence snuffed out the attack and immediately released their winger down the right but his shot was blocked by left full back Olly Hanley, giving Derby their first corner of the game in the second minute.

Ben Rhodes, Leo Jones, Sid McCoy and Olly Hanley in the York defence were equally resolute as they held up the Derby attacks. Derby were edging the early play as keeper Joseph Hodge was forced to make two comfortable saves in the first ten minutes.

The game was end to end, with the blustery wind playing a major part, with both teams unable to really test each other’s keeper. In the dying minutes of the half, with possibly York’s best play of the game so far, a Harvey Stephenson free-kick found its way to Ben Calam on the right wing who, sailing in a pin point cross over the top of the Derby defence, found Luke Jones unmarked, 6-yards out from the back post but as he controlled the ball the ref blew for half-time.

York started the second half as they finished the first, straight on the attack but a Luke Jones shot did not trouble the Derby shot stopper.  The introduction of Charlie Fort down the left flank opened up the Derby defence, as he sailed over a pin point cross finding Luke Jones at the back stick unmarked, the latter having more time than he thought as he chested down the cross and struck a sweet volley back across goal only to see it fly wide of the left-hand post.

Like Derby in the first half, York were edging possession with the slight advantage of the cross-field wind, pressuring the Derby goal without really testing the keeper.  Yorks defence of Joshua Byfield, Leo Jones, Sid McCoy and Olly Hanley were alert to Derby hitting York on the break down each flank, as they also failed to test York keeper Joseph Hodge.

As the wind picked up it started to play a major part as both teams struggled to deliver a good final ball.  Unfortunately for Derby it was a mix up between Keeper and defender on the edge of the 18-yard box, from a Charlie Fort through ball that saw the defender slice the ball round the onrushing keeper, aided by the wind the ball rolled into the net putting York 1-0 up with 15 minutes left to play.

Ed Hammond and Luke Jones had chances to put York further in front before the Derby striker was unlucky to see his 25-yard shot sail narrowly over the bar. The game was killed off in the 68th minute when Luke Jones pounced on a poor back pass rounding the keeper and holding off the defender, calmly slotted into the empty net making it 2-0 to York at the final whistle.

Managers Comments (Alan Oliver / Neil Stephenson): Well done today boys getting the three points in the league. But as I said at the end of the game, questions asked, 1. Why were you so quiet today on the field and 2. No pressing today, 3. Never give up a lost cause!! Take this away with you to improve next week. We played an average side today so we need to up the game. It’s a good sign though when you play an average side and come away with the points.

Big game next week, you need to raise your game!

Man of the Match was awarded to Sid McCoy for his defensive display.  well done Sid.