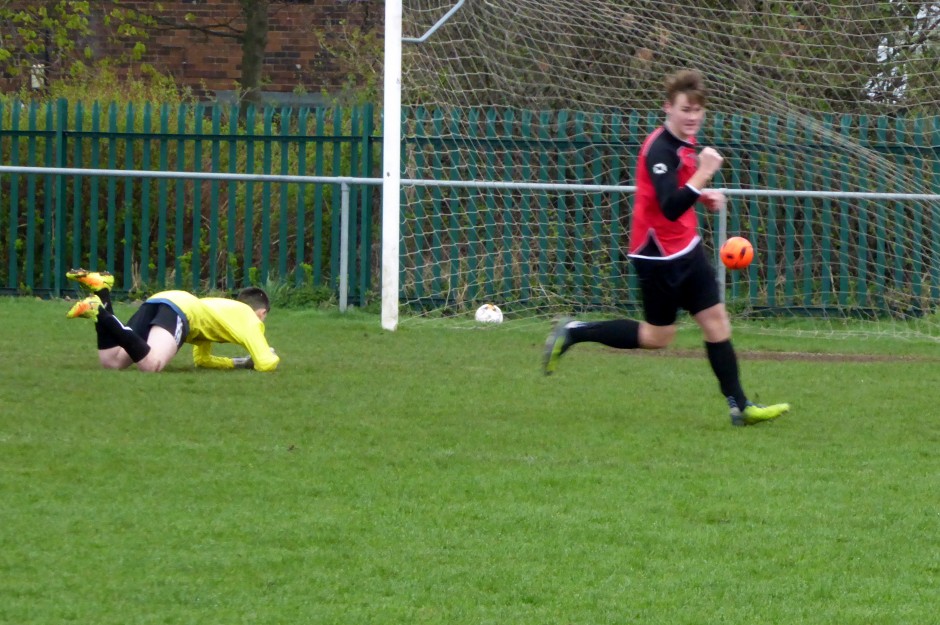 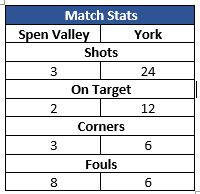 York travelled to Spen Valley for their penultimate league game of the season.  York kicked off against a determined Spen Valley side with the Harvey Stephenson, Elliot Oliver, Ben Calam and Charlie Fort dominating in midfield.  In the 3rd minute a defence splitting pass from Liam White put Luke Jones through on goal who placed his shot to the left of the onrushing Valley keeper putting York 0-1 up.

York pressed high keeping Spen in their own half and could have been further ahead, in the opening minutes, as Charlie Fort forced a save from the Spen Valley shot stopper and Luke Jones seeing his chip over the keeper cleared of the line by the Valley defender.  A second goal arrived in the 10th minute after a corner delivered by Harvey Stephenson was met by the head of the rising Luke Jones, the resulting header was parried by the Valley keeper falling to Elliot Oliver who calmly slotted in from close range.

Spen Valley, determined to get back in the game, hit York, as they pushed forward. on the break but the defensive line of Leo Jones, Ben Rhodes, Ben Fawcett and Sid McCoy stood firm dealing well with the Valley wingers and forwards.  A 13th minute Valley corner was easily dealt with by the York defence before Luke Jones hit the post at the other end.  Joseph Hodge was called into action for the first time in the 23rd minute saving well from the Valley forward well struck shot.

Some great passing play through the York ranks saw another defence splitting pass from Liam White putting Luke Jones through for him to notch his second of the game putting York in a commanding 0-3 lead on 25 minutes.

With York in the ascendancy, they were unlucky not to add to their lead as Luke Jones, Ben Calam and Ben Fawcett all came close to extending the lead, and Elliot Oliver forcing the Valley keeper into a fine save with Valley defence charging down a Liam White goal bound effort, keeping the score 0-3 going into the break.

Spen kicked of the second half only to be dispossessed by Luke Jones, who this time turned provider for Liam White, making no mistake with his left foot shot, to put York 0-4 minutes into the re-start.  York hemmed Valley into their own half with Liam White forcing another save from the Valley keeper from a corner delivered by Ben Calam.  With Joshua Byfield and Olly Hanley running the wings York were creating chances limiting Spen to the occasional forage into Yorks last third, their dogged persistence paid off when the Valley number 9 found himself some space on the left-hand edge of the penalty area hitting a cross goal shot hitting the inside of the far upright before nestling in the back of the York net making the score 1-4 in the 54th minute.

With Charlie Fort and Luke Jones harassing the Valley defence, the keeper sliced a clearance from a pass back that went spinning into the air and was headed in over the keeper by Charlie Fort making the score 1-5 with 10 minutes left on the clock.

York were awarded a soft penalty in the 65th minute when, from a York corner delivered by Harvey Stephenson, the Valley defender was adjudged to have fouled Elliot Oliver.  Luke Jones stepped up to claim his hat-trick as he powered his shot underneath the diving Valley keeper putting York 1-6 up.  Joshua Byfield and Ben Calam both came close to increasing Yorks lead in the remaining minutes as York ended the game on the attack.

Managers Comments: – (Alan Oliver / Neil Stephenson): Well done to all the lads. 100% better than last week. They took everything that was said last week (to improve on our sharpness around the field, quicker decision making and good pressing football) away with them. It was a pleasure to watch. Well done to everyone.

Man of the Match: –  was awarded to Elliot Oliver and Sid McCoy for their pressing during the game and work rate.