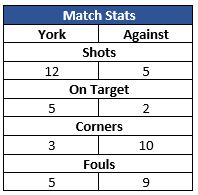 York U15s kicked of their season with a pre-season tournament at Sheffield with some new faces in the squad.  Drawn in a group with Leeds, Sheffield and Nottingham Yorks first game was against Leeds.

With York kicking off the 20-minute game York were on the attack with Luke Jones narrowly missing the target with the first free kick off the game. York were edging possession against a tough Leeds side with Ban Calam, Elliot Oliver, Harvey Stephenson and Liam White battling in midfield, with Harvey Stephenson putting his shot in the 3rd minute just over the bar.  When Leeds did break through the midfield they found Sid McCoy, Leo Jones, Max Potter and Charlie Fort protecting Nathan Storr in goal denying Leeds any shooting opportunity.  Unfortunately, York could make their chances count with Kieran Ledger and Liam White also having chances towards the end of the game with the match finishing 0-0.

Next up for York were Nottingham, again York were the first to create an opening with Ben Calams shot saved by the Notts keeper in the 4th minute.  With York pushing for the opening goal they left themselves exposed at the back and some neat interplay between the Nottingham midfield and attack left the Notts attacker one on one with Nathan Storr who calmly made it 0-1 to Nottingham in the 7th minute.

From the restart York continued to attack and had Joshua Byfield and Louis Jarvis keeping the Notts wingers at bay while York tried to prise open the Nottingham defence to no avail.  A Nottingham corner, in the 14th minute found their striker unmarked as he made it 0-2.  York had chances to reduce the deficit with Elliot Oliver and Harvey Stephenson calling the Notts keeper into action before the final whistle.

Yorks third and final game was against Sheffield who had won their previous two games against Leeds and Nottingham.  With Sheffield kicking off and immediately forcing a corner after some good defending from Leo Jones.  This time York were awake and cleared their lines.  Sheffield were edging possession with the Sheffield striker calling York keeper Nathan Storr into action for the first time in the tournament and he was alert to the shot saving well to his right.  York were battling hard against Sheffield’s dominance, defending resolutely at the expense of a number of corners.  York grew into the game as it progressed with Liam White narrowly missing the target before Kieran Ledger saw his shot saved by the Sheffield keeper.  Both sides pushed for the opening goal with the clock counting down but couldn’t make their chances count with the game finishing 0-0.

Managers Comments (Alan Oliver / Neil Stephenson): Well done in the first game, lads did what I asked. Came to the second game but with a little break all the lads talked about how easy Nottingham were, said we should beat these but a big lesson learnt. Give all teams total respect and only celebrate if you beat them not before. In the game against Sheffield, very unlucky. Top team in the competition. They tried to knock us out by wasting time and with a bit of luck we should have won and progressed through to the next round; however, it was not meant to be.

As I always tell you. Learn from each game and if you don’t; you will never progress.