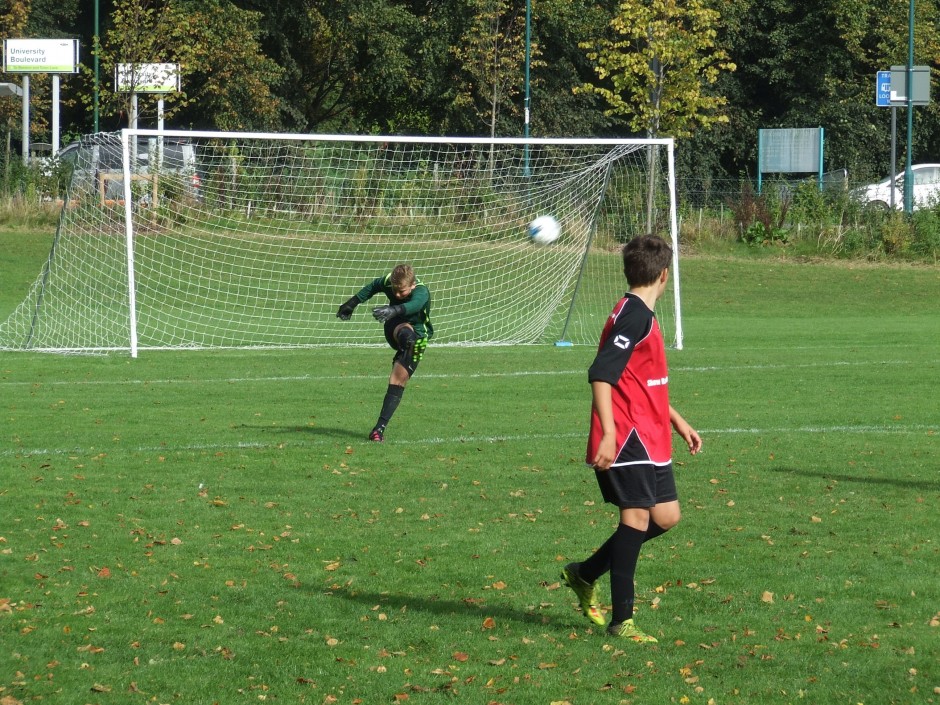 YORK SCHOOLBOYS U13 hit the ground running in their first league fixture of the 2017/18 season with a 3-1 victory away at Nottingham. The York youngsters were the ones who left the home of Robin Hood with the points in the bag in a game that could have been sealed by half time.

It was the away side who began brightest, dictating play and creating several chances that simply could not be converted. Kaiden Butler hit the woodwork with a low drive from outside the area and Archie Colley poked over the bar after latching onto a lofted Tom Algar pass. It was Algar who fired the first arrow into the Nottingham net – a superb free-kick driven in from the half way line somehow managed to find its way through the crowded penalty area to slide into the bottom corner of the goal. This goal caused the Nottingham boys to react with some more positive phases of play, however, they continued to give away cheap free-kicks, forcing the referee into some difficult decisions, which was handled immaculately.

The game began to open up and closer to half time, it was Nottingham gathering momentum with a series of corners dealt with well by Noah Ellis, Tom Algar, Will Hotson and Jack Maeer. Shortly before half time Tom Coy made a stunning goal saving tackle inside the box, unfortunately ending in an injury and his morning. York continued to create chances with midfield generals Dillon Meehan and Kieran Clayton pulling the strings but that vital second goal eluded them.

The second half began with Nottingham out of the block the quickest and it didn’t take them long the grab an equaliser. An in-swinging corner from the right ended up in a goalmouth scramble but the Nottingham forward got the all important touch to poke it home, 1-1. The equaliser encouraged another momentum swing after the goal, this time in Yorks favour – with Cole Gayles and Tommy Cahill using their trickery and pace to get the byline and deliver crosses. Midway through the second half, Kieran Clayton was switched out to the left hand side of midfield and it was Clayton who was to find that second York goal. A chipped ball over the full backs head by the returning Ellis Cattaneo found Clayton who thundered a left footed volley into the top left hand corner, leaving the goalkeeper no chance,1-2.

From then on it was York who controlled the final 15 minutes. It saw Nathan Heaton galloping forward from the full back position, feeding Kaiden Butler who danced passed a couple of players before dragging his strike wide – however, he was not to be disappointed for long. Another mazy run from Tommy Cahill down the right hand side saw him tease a cross into the six yard box, which the goalkeeper could only parry into the path of Butler, who drilled low passed the covering defenders on the line, 1-3. Things could have got even better for York as Cahill breezed past four Nottingham defenders only to see his shot saved down low by the keeper. Strikes from Meehan and Butler, (who thrived in the number 10 Francesco Totti role), were well saved again by the Nottingham keeper.

Overall a solid performance from the York side as they travelled home in good spirits. The boys hope to continue that start next week in Round 1 of the ESFA Cup at home to Scarborough.