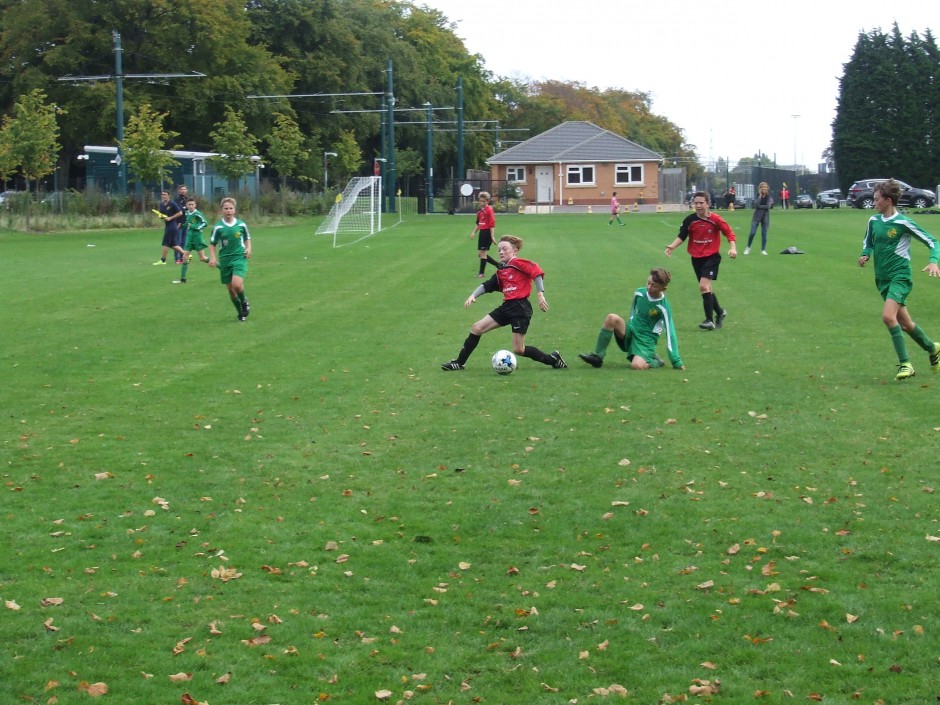 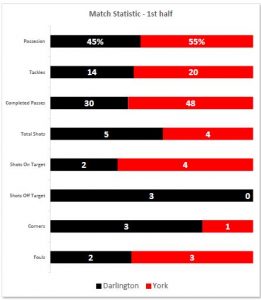 After their success in the first round of this competition and the recent West Yorkshire Cup tie, York were brimming with confidence for their encounter against Darlington in this the 2nd round fixture. As Darlington lined up to shake hands the difference in size of the teams became apparent. This was going to be a tough physical challenge for the York U13 school boys.

Darlington won the toss and opted to kick off. Early chasing by Jack Hancock was rewarded with a corner that Darlington struggled to deal with and the resultant scramble led to the ball being cleared off the goal line by Darlington and towards their strong well organised midfield. Darlington immediately turned this opportunity into an attack but the composed defending of Tom Coy neutralised the threat. Despite the physicality of the Darlington midfield York were still finding chances and a strong drive forward by Dillon Meehan was curtailed by a foul just inside the Darlington half. Tom Algar lofted the free kick into the box and the defence of Darlington could only clear the ball as far as Archie Colley who instinctively struck the ball only to see his shot saved by the goal keeper. Darlington instantly broke up field and narrowly fired wired to the left of the goal after a rare defensive error by York. The York midfield continued to work hard and a committed challenge from Kieron Clayton managed to break the flow of Darlington who by now seemed to be camped in

the York half. A series of fantastic saves from the York keeper Josh French-Adam who was making his full debut for York kept them in the game. French-Adam was showing great composure and confidently claimed anything that came in his area. Darlington were continuing to apply pressure and York were struggling to get out of their own half. A Darlington corner was cleared by the head

of Algar, Meehan collected and took the ball well into the Darlington half before crossing towards goal, but the ball was eventually cleared. Darlington were back on the attack and forced what was probably the save of the match. A shot fired from close quarters was stopped by a reflex 1 handed save to the right of the fully stretched Keeper French-Adam. The ball bounced towards the goal and as the Darlington parents were celebrating what they thought was a sure goal Josh somehow managed to scramble back and get a hand on the ball to stop it rolling over the line.

In full defensive mode York still managed to show a threat as Kaiden Butler put a great ball over the top of the defence that was just too far for Colley to reach. Butler and Colley linked up well again and only Butler getting pushed off the ball stopped a chance of a shot. Despite these threats from York Darlington persisted in the York half. Only quick closure from the York defence forced a powerful Darlington shot over the bar. Butler again gave some relief to the defence when he found Tommy Cahill out wide on the left who then took the ball past 3 Darlington players with his blistering pace before having his shot saved.

A hard tackle on Jack Hancock saw him replaced by Matty Hobson as the first half was getting close to ending. Darlington came again, and this time they saw 2 shots cleared by the defence. York were growing in confidence and finally making use of the possession they were enjoying, they began to make inroads into the Darlington half more frequently. Meehan broke through again and setup a shot for Colley. The defence now sitting higher up the field then got involved in attacks with both Jack Maeer and Coy firing in long range shots. Butler, Hobson and Cahill were continuing to link up well and York finished the half strongly with a shot being saved from Meehan in the top right of the goal. 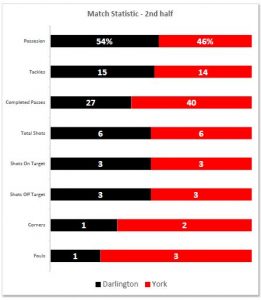 The second half began with the team unchanged and as the first half had ended; with York on the attack. Immediately from kick off Algar put a through ball to Cahill who again showed his pace and left the defence standing, he crossed with precision to Butler who fired with venom towards goal but the unflappable Darlington keeper saved it. Immediately Cahill was back plaguing the Darlington defence and this time after cutting into the box and clearing 2 defenders he unselfishly crossed to Meehan who struck the ball with his left foot first time and narrowly missed the goal. York were finding success down the left hand side and Butler cut in from that side shortly after and forced a one handed save which saw the ball hit the post. Clever football from Colley won York a corner.

Down the other end Darlington won a corner and only a brave save of a close range shot by French- Adams kept York in the game. York dealt with a further 2 corners with one shot hitting the York cross bar before being cleared by Clayton. York then conceded a dangerous free kick on the edge of the box but it was safely dealt with by Will Hotson who was solid in the York defence. Darlington were beginning to take control again and the fresh legs of Cole Gales were brought onto the pitch to bolster the York midfield.

somehow York were soaking it up and keeping the score at 0-0. The York defence was resolute and the keeper positively dealing with anything that came at him. Eventually the Darlington pressure became too much, and York conceded a penalty that Darlington scored confidently. 1-0 Darlington.

York kept their heads and continued to take the battle to Darlington. Gale was doing his defensive duty as well as providing a new attaching option. Another substitute saw Colley come back onto the pitch. Algar fired a bullet of a shot from just inside the Darlington half that narrowly went over the bar. A warning shot to Darlington that this game was not over. York continued through Butler and Gales to attack, nobody was giving up. Hotson calmly neutralised a Darlington break and then only a few moments later Darlington had a penalty claim for a hand ball turned down to the despair of the on looking Darlington parents who were sensing danger from York.

Their sense of danger quickly turned to relief when Darlington broke from their own half with a good through ball to an unmarked player in the York box. Cries of offside could be heard as his shot was parried by the York keeper before it was simply tapped in by another Darlington player. 2-0 Darlington.

York did not give up and continued to attack with Algar pushing up from defence. Cahill had 2 more difficult chances but on this occasion York failed to find the net.

Man of the Match: Josh French-Adam 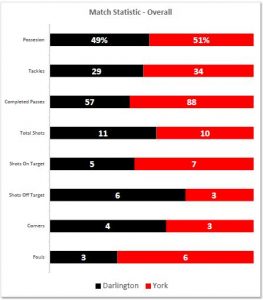