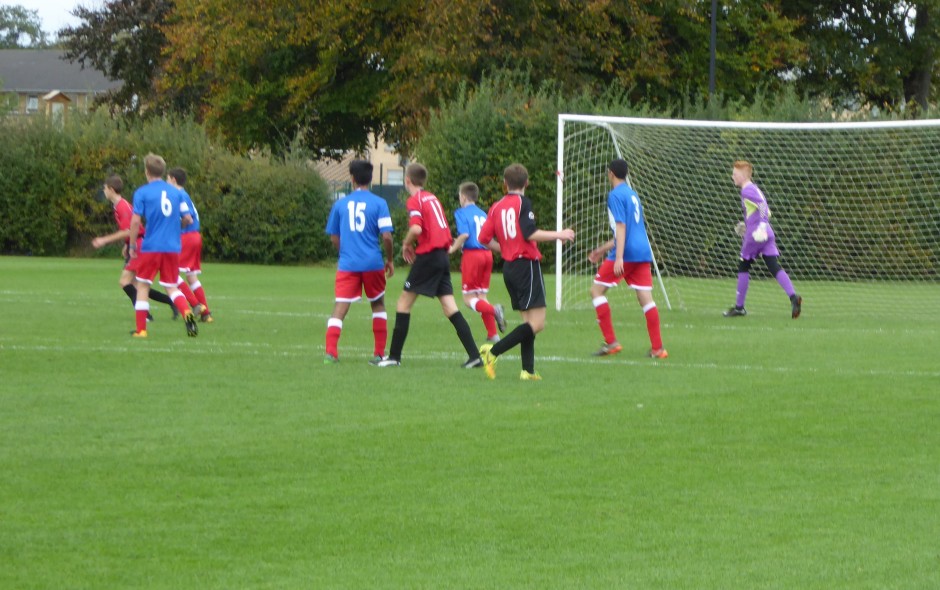 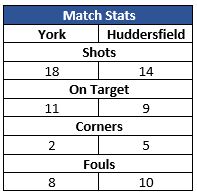 York U15s hosted Huddersfield in round 2 of the ESFA cup.  Both teams started brightly playing some good, passing football, Liam White. Elliot Oliver, Max Potter and Ben Calam battling with the Huddersfield midfield.  On 5 minutes York had the ball in the back of the Huddersfield net; but as the York striker was offside the goal didn’t stand.

York backs of Louis Jarvis and Sid McCoy were keeping the Huddersfield wingers at bay as the visitors looked to exploit the wings.  With some good defending, and stray passes, from both teams neither keeper had a shot to save until the 11th minute when some good interchange play between the two York strikers of Joe Nash and Luke Jones created the first real chance of the game but Jones’ shot was well saved by the Huddersfield shot stopper. Seconds later Joseph Hodge was called into action diving low to his right to tip the Huddersfield strikers shot round the post.  A shot from the resulting corner saw Ben Calam clear off the line for York.

As the fine balance of play swung in favour of the visitors Yorks centre half pairing of Kieran Ledger and Leo Jones marshalled the Huddersfield attackers limiting their shooting opportunities, equally York were finding the Huddersfield defence just as resilient keeping York to long range efforts with Luke Jones, Joe Nash, Liam White and Elliot Oliver testing the keeper form range. A driving run down the right by Ben Calam released Luke Jones whose shot narrowly missed the top left-hand corner with the Huddersfield keeper seemingly beat for the first time before the Joseph Hodge was called into action in the York goal gathering a long range effort from the Huddersfield striker as the 1st half finished goalless.

Huddersfield were quick out of the blocks in the second half forcing York keeper Nathan Storr into an early save. Whilst at the other end Harvey Stephenson’s low drive was tipped round the post by the Huddersfield keeper, giving York their first corner of the game.  Ben Calams whipped in corner was delightfully guided into the back of the net by Elliot Oliver putting York 1-0 up in the 3rd minute of the second half.

With the game end to end, both sides were creating chances with Ben Calam going close for York before Nathan Storrs one handed save to deny the Huddersfield attacker. But as York struggled to find a way through the Huddersfield rear guard, York were left rueing their chances as a deflected Huddersfield shot across goal snuck in at the far post with the York keeper stranded in the 70th minute giving Huddersfield a commanding lead of 1-3.

With 10 minutes remaining York were not about to give up but had to dig deep until the 75th minute when Liam White and Luke Jones linked up to release Joe Nash whose first time shot sailed across goal into the top right-hand corner giving York a life line with minutes to go.  As York pushed forward in the dying minutes both Joe Nash and Ben Calam came close to levelling the scores forcing saves from the Huddersfield keeper.

In the last play of the game Luke Jones cut the ball back across goal, after driving to the bye-line, with Yorks attackers unable to get on the end of the pass the game finished 2-3.

Managers Comments (Alan Oliver): Well done to the lads. Each player played really well; we just didn’t take those chances and Lady Luck wasn’t on our side unfortunately. Played some great football again. Coach and parents proud of how you played.

We go again next week away to East Riding.

Man of the Match was awarded to Louis Jarvis for great defensive play. For a small lad he’s not frightened to get struck in. Well done Louis.