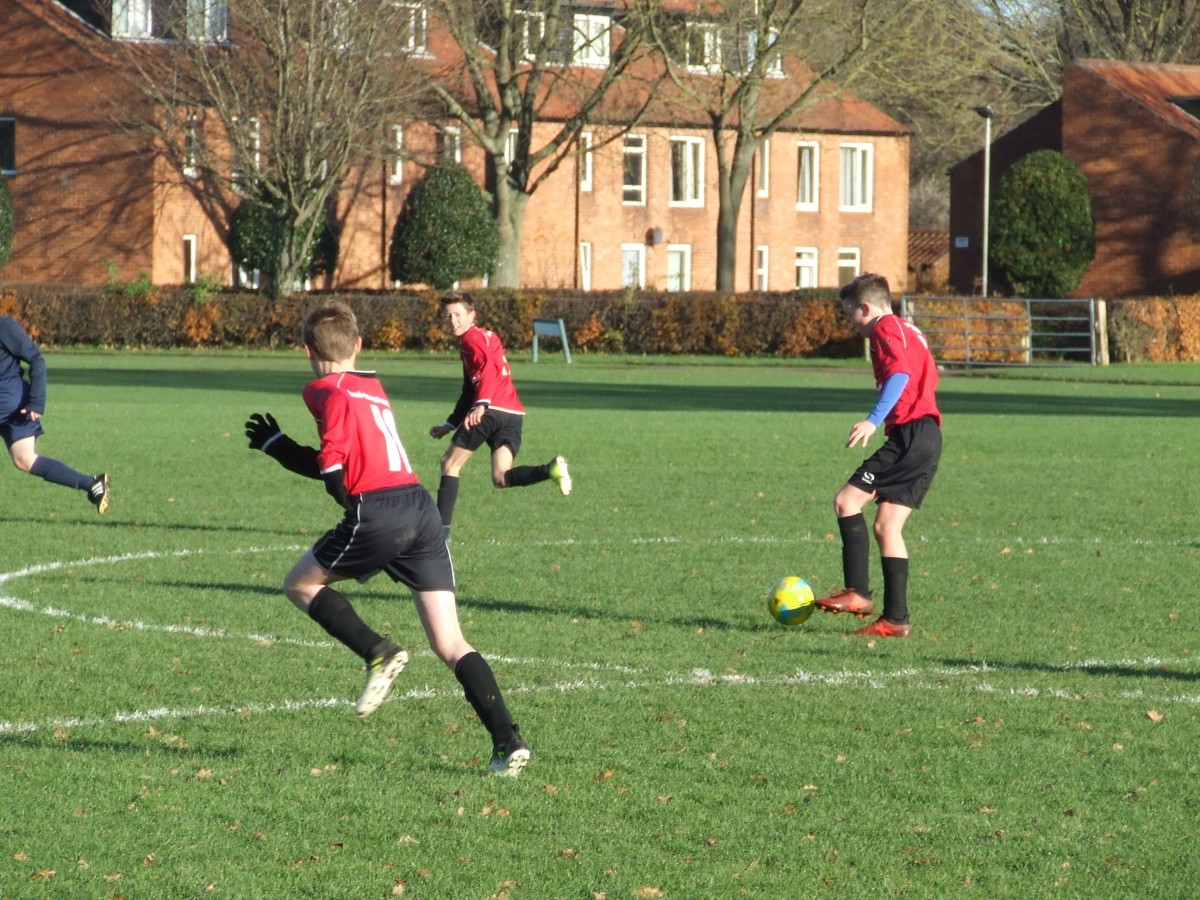 A cold morning, and frost covered pitch welcomed the U13 boys from the steel city of Sheffield. Sheffield won the toss and put the low, slow rising winter sun straight into the faces of York. An unsettled start to the game didn’t allow either team to gain any advantage or grip on the game. An early free kick halfway inside the Sheffield half was not capitalised on by York who fired it over the bar. The York defence, under pressure, gave away a foul on the edge of their box only to see the resultant free kick narrowly headed over the bar by Sheffield. Immediately afterwards another free kick was conceded by York about 10 yards outside the York box but fortunately for York it came to nothing as the Sheffield strikers were both offside.

York began to settle into the game and the Sheffield threat that seemed to be culminating down the right was now well under control as the ever-busy Jack Maeer and Tom Coy dealt with anything that came their way. The York midfield was now also beginning to gain control over the game with both Kaiden Butler and Dillon Meehan running hard and closing Sheffield down. Sheffield were awarded another free kick on the right-hand side. The resultant dangerous cross across was marshalled out calmly by Will Hotson while under the pressure of the Sheffield striker. Immediately afterwards Sheffield attacked again, but this time down the left where they quickly crossed the ball into their expectant striker.  Noah Ellis stood tall, leaving a narrow angle for the Sheffield shooter who could only find the side netting.

The relentless and dogged chasing down by Tommy Cahill was bringing rewards to York.  He quickly won the ball and took it down the left wing leaving the Sheffield midfield behind.  His cross was met by the right foot of Butler who sweetly stuck towards goal but somehow Sheffield managed to clear it off their line after the keeper parried it.  Tom Algar neutralised the resultant Sheffield attack and put through a long pass to the right wing for Archie Colley to run on to.  York were now beginning to get the edge over Sheffield and look the more goal threatening team as Meehan was now continually marauding on the edge of the Sheffield Box.

As the first half was drawing towards a close Sheffield came back and entered another attacking spell and only a couple of forays from Colley relieved the pressure on the York defence.

York then made a tactical change through a double substitution. Butler was replaced with debutant George Harrison, and Cole Gayles replaced Colley. Meehan immediately picked up a loose ball and sent Cahill down the right who saw his shot skim off the right post and go out for goal kick. York finished the half in the ascendency but another late strike from York failed to find the net. At half time it was 0-0.

Sheffield started the second half with an immediate attack but a solid header from Hotson to clear the danger gave York the encouragement to get back to how they were playing at the end of the 1st half. Clayton took the ball down the left wing and after beating his counterpart he crossed the ball into the 6-yard box where Harrison was present to gently lift it over the keeper. Harrison’s debut goal made it 1-0 to York.

York continued to attack with Meehan, Cahill and Harrison linking up to create a continued pressure on the lads from the Steel City.

Out of nowhere Sheffield suddenly equalised through an incredible long range thunder bolter that seemed to rattle around the mouth of the goal before eventually finding the back of the net. The second half keeper Josh French-Adams had no chance. 1-1. Sheffield were buoyed by their goal and stepped up a gear. Soon after they were rewarded with a corner which they neatly converted with a header to take the lead 1-2.

Despite some determined defending from Clayton in midfield and the York defence that remained composed, Sheffield were now relentless in their attacks with a shot hitting the post from the edge of the box. Sheffield came again, and this time, they were rewarded as another long range shot found the back of the York net. 1-3 to Sheffield.

York did not relinquish their desire to maintain their unbeaten start to the league campaign and every player continued to work hard.  Cahill cut inside from the left after taking on 2 players only to see his cross an inch too far for the stretch of Colley.  Shortly afterwards Cahill again took the ball in his own half and ran all the way through into the Sheffield box before laying off to Clayton who saw his shot saved.  Colley hit the side netting after some excellent passing from Hobson and Cahill before the referee blew his whistle for full time.