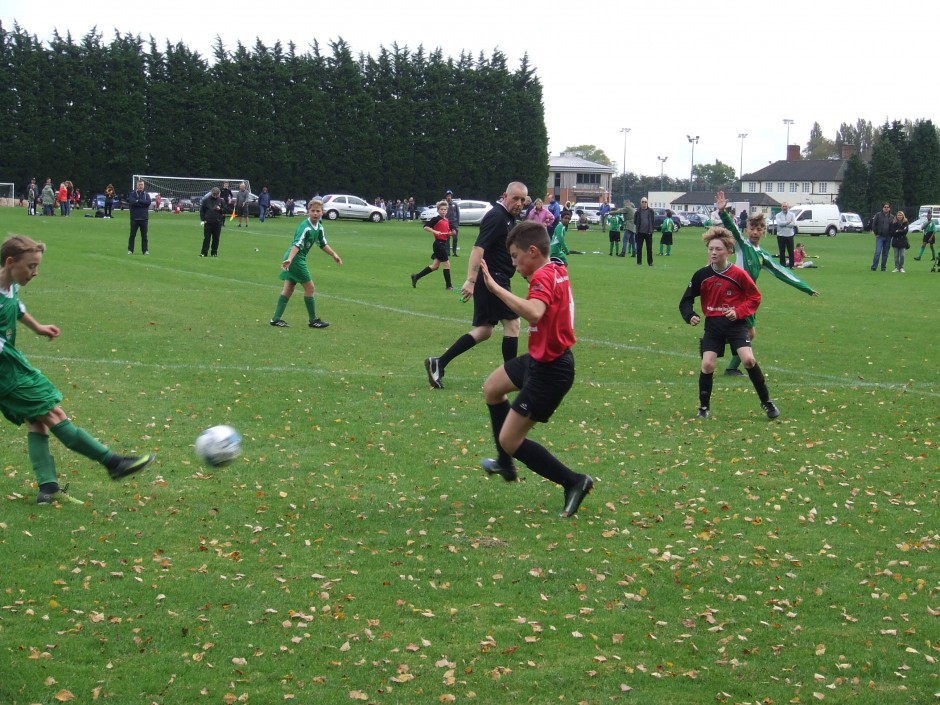 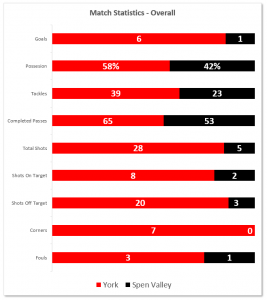 York School Boys bounced back from the disappointment of last week’s ESFA cup defeat with a prolific performance against Spen Valley to maintain their unbeaten status in this seasons league campaign.

York lost the toss and were forced to play with the low winter sun shining brightly in their eyes. Initial good possession from Spen Valley was soon curtailed by the solid back four of York comprised of Tom Coy, Tom Algar, Will Hotson and Ellis Cattaneo. Josh French-Adams started in goal following his excellent debut last week.  Cole Gayles and Kaiden Butler both fired in dangerous crosses in the early stages of the game, but it was Kieron Clayton who took charge of midfield straight away with some excellent tackling. When Spen Valley did break, solid tackles on the edge of the box soon neutralised the threat. A through ball from Algar allowed Archie Colley deep into the Spen Valley half where he won a corner close to the left corner flag.  A quick throw in allowed Dillon Meehan to stride into the box and under pressure from the Spen Valley defence he managed to fire a shot that was saved by the keeper.

Spen Valley were still showing signs of danger to the York defence until the ball broke to Butler who charged down the left wing. Leaving their defender flat footed he crossed the ball to Clayton in the centre of the box who under immediate pressure managed to flick the ball on to the back post with a neat header. This was to the ever-present Tommy Cahill who also burdened by the Spen Valley defence calmly crossed it back to Butler on the near post who confidently head it home. 1-0 to York.

Cattaneo was working tirelessly at the back and set-up a good opportunity for Butler who saw his shot saved. Meehan, working equally as hard, setup Cahill who put a ball through to Butler for another chance. York then started to create further opportunities from the left wing and a relentless wave of attacks were to follow. Eventually York won a corner. Clayton rose above the challenging defenders and fired a header on the crossbar but today the luck was with York and it fell to Meehan who calmly headed it in to see York lead 2-0.

With midfield winning most of the battles the defence was pretty much untroubled and able to get involved in a more attacking role allowing the midfield to push even higher.  Again, York were troubling Spen Valley down the left wing thanks to Gayles, Butler and Clayton. A weak goal kick was seized upon by Colley who was far more alert than his nearest counterparts. Following a quick one-two with Gayles he blasted the ball into the top right of the goal leaving the keeper with no chance. 3-0 to York.

Gayles again was causing major problems for Spen Valley down the left and put in a fantastic inch perfect cross onto the head of Cahill who nodded it into the bottom right to make the score 4-0 to York.

Pressure was beginning to show on the players and the Spen Valley bench alike. But the York midfield kept their heads and continued to play some great attacking football. Algar pushed up to see his 30-yard strike smash the cross bar and go out for a goal kick. Spen Valley were not finished yet though and saw a shot narrowly pass the left post of York’s goal.  Shortly afterwards an excellent cross from Spen Valley cut out most York players and allowed their striker to fire one under the York Keeper French-Adams who had little chance to do anything about it. 4-1.

York were not hindered by this slight setback and immediately went on the attack. Benefiting again with space on the left-hand wing Gayles cut inside and hit the crossbar.

The second half saw the introduction of Noah Ellis in goal and Matty Hobson to midfield. Hobson got to work straightaway on the right-hand side with his defensive duties and prevented any Spen Valley threat.  Clayton and Butler linked up to set Cahill free down the left wing who seemingly skipped past most of the Spen defence to run into box and neatly put it away at a tight angle. York 5-1.

Ellis was organising from the back and the defence looked rarely troubled. Chasing down up front from Colley caused the goal keeper to miss kick. Midfield continued to work hard and link up well. Numerous attacking sorties were engineered through Butler, Clayton, Hobson and Colley resulting in narrow misses. Eventually midfield were rewarded for their labour and Colley breaking through from the centre of midfield passed to Butler who neatly and calmly put away York’s 6th of the morning.

Spen Valley still had fight, and only the confident brave actions of Ellis to come out and claim a ball from the impending striker stopped the visitors claiming a second.  A number of tactical changes in the last ten minutes saw York close off the game confidently and the finished the game completely in control.

York now face a further four league games in the run up to Christmas with their confidence high.