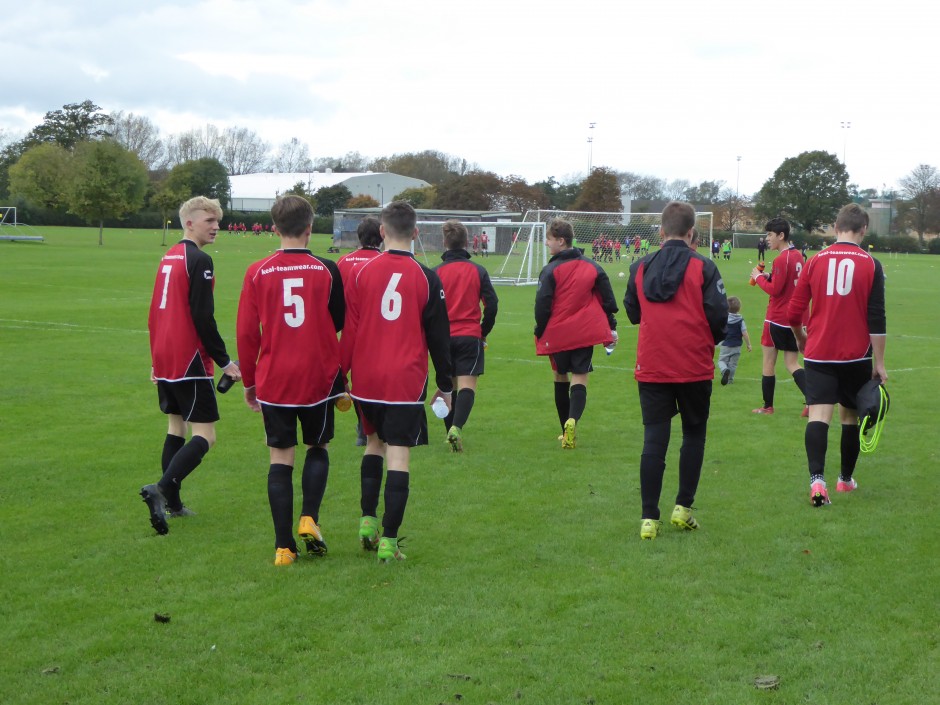 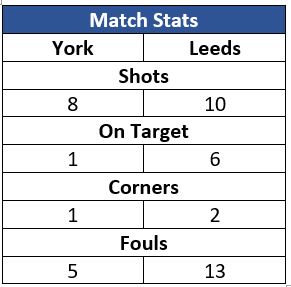 Leeds kicked off passing the ball around nicely, culminating in the first shot of the game which went wide.  Yorks midfield of Max Potter, Liam White, Elliot Oliver and Harvey Stephenson pressurised the Leeds midfield.  An innocuous back pass was chased down by the expeditious Charlie Fort, with the Leeds keeper taking time to control, Charlie Fort pounced, tackled and slid the ball into the net to put York 1-0 up in the 2nd minute.

With the game end to end and both sides working hard the back four of Sid McCoy, Leo Jones, and Luke Jones limited the Leeds forwards to half chances, while at the other end Kieran Ledger and Charlie Fort found the Leeds defence resolute.

With Leeds in the ascension York had Sid McCoy to thank for a goal line clearance after a goal mouth scramble.  York continued to press with forwards Ed Hammond and Charlie Fort unable to find the final ball.  On the half hour mark a Leeds free-kick, 20 yards out, was curled around the wall into the top corner putting Leeds 1-2 ahead.

Both sides showed dogged determination as they fought out the remainder of the 1st half with minimal clear-cut chances.  A Luke Jones free-kick was put narrowly wide of the left-hand upright in the early minutes off the second half as York pressed for the equaliser.  Kieran Ledger, Sam Jarvis saw their shots go wide as the Leeds defence kept York down to half chances.  York were having the better of the second half, just as Leeds had edged the first half, but couldn’t make the possession count.

A Leeds corner was cleared by Louis Jarvis but found Ed Hammond off-side.  Elliot Oliver went close with a shot over the bar before Leeds were awarded a dubious penalty for handball, which the Leeds striker hit low and left with Joseph Hodge a whisker away from getting a hand to, to put Leeds in command at 3-1 in the 70th minute.

Ed Hammond and Charlie Fort had chances before in the dying minutes a Leeds free kick from the right flank was misread by the York keeper to leave a tap in at the back post for the Leeds forward to put them 1-4 up at the final whistle.  The score line doesn’t reflect the game but all credit to Leeds who took their chances.

Writers Comments (Kev Jones): It’s been a pleasure over the last 5 seasons to watch you boys play some great entertaining football, with commitment, dedication and enthusiasm; but above all to watch you have fun.  I wish you all well in your future endeavours.

Managers Comments (Alan Oliver): Well done to all the lads. Score line did not reflect the game at all. It was an Evan match in the first half but you dominated them in the second. A few mistakes cost us dearly. As I always tell you at this level mistakes will cost you.  Overall, I couldn’t ask for more, you gave me 100%, especially to those who were under the weather.

I’d just like to say hope to see you all on the 11th May for our presentation do. It’s been an honour and a pleasure to coach everyone of you over the last 2 and a half years. I wish you all the best in the future, see you all at the presentation do. Hope my speech doesn’t bore you too much.

Man of the Match was awarded to Leo Jones who battled on and gave me 100%.