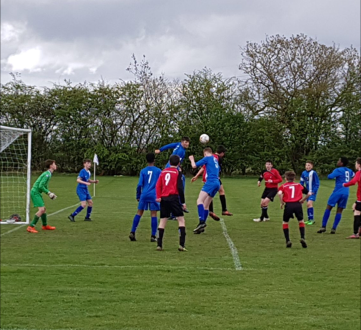 York faced the league champions in their final fixture of the season. The Leeds squad was well packed with big strong players and had only conceded 6 goals in their league campaign; a tough test for York. What ensued was a thoroughly entertaining game where York were extremely unlucky to not come away with at least a point.

York started the brightest despite strong tackling from Leeds and early chances fell to Kaiden Butler, Archie Colley and Dillon Meehan.  Tommy Cahill came the closest with a strong header that went narrowly wide.  From the goal kick Leeds managed to break through and a miss kick from the striker saw the ball wrong foot the whole York defence and trickle across the face of goal before being tapped in to make it 0-1 to Leeds.

The setback did not undo the resolve of York who continued to play well and with Meehan forcing a great save from the Leeds keeper just before half time it meant they went into the break with optimism that they could come back and get something from this game.

York again started the 2nd half strongly and won an early corner.  Leeds broke from the clearance and ended up one on one with the debutant York keeper Ben Young who made a great save to keep it 0-1. Again, York were on the offensive and again Leeds managed to counter but the Leeds striker could only find the post. York continued to push; a superb cross from the left by-line by Owen Dunckley could not be met by the marauding Butler and Cahill. It was going to take something special to break down the Leeds defence and that is exactly what York did.  Latching onto a cross Butler scored with an overhead scissor kick that fired the ball into the bottom right corner. 1-1.

York were unlucky to concede a corner not long after kick off. Leeds converted to make it 1-2.

Ellis Cattaneo was testimony to the hardworking midfield who looked to get injured while making a tackle but with gritted teeth continued to close down the Leeds efforts. Tom Algar, Jack Maeer, Will Hotson and Tom Coy were resolute in defence and dealt well with the tall Leeds strikers.  Algar picked up on a spilled Leeds ball following a solid tackle, he took the ball through midfield and laid it off to Meehan who saw his shot saved. Again, Leeds broke and were only prevented from scoring when the York keeper came out bravely to claim the ball – a truly heroic claim from Young. After thwarting a Leeds attack and winning the ball, Hotson laid it off for Coy to run onto. He took the ball down the wing and crossed it to Cahill who just couldn’t quite get on the end of it.

Following a lot of pressure from York, Leeds managed to find relief when they broke down the left wing.  A cross deep into the York box seemed to hang in the air and dropped into the top corner to make it 1-3. Again this cruel set back did not perturb York and they continued to press for another goal.  Nathan Heaton neatly headed in a corner to make it 2-3 with only 4 minutes remaining.  York continued to push for an equalizer but unfortunately ran out of time. Final score 2-3.