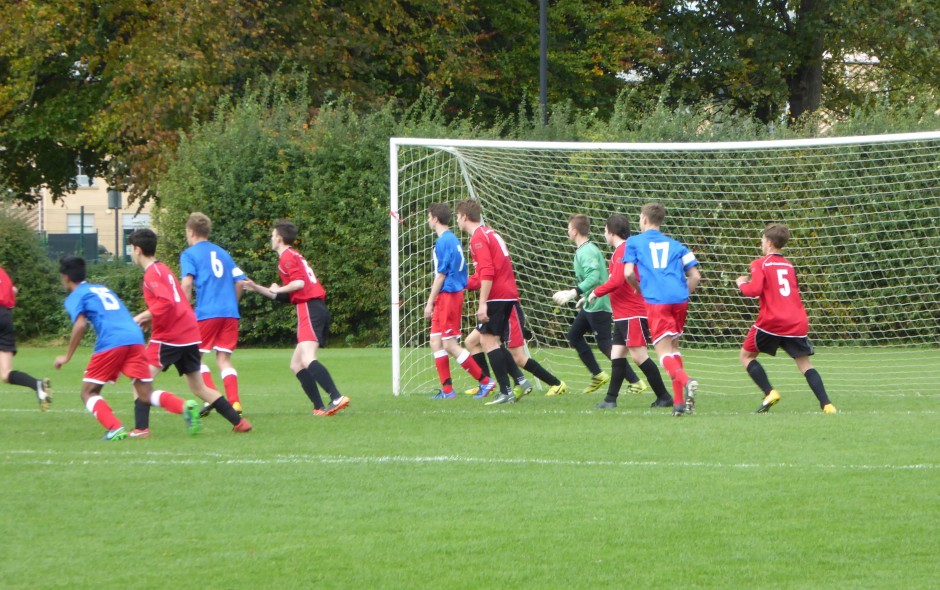 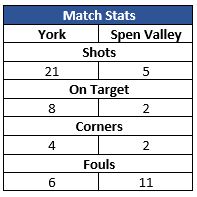 York U15s entertained Spen Valley in their first game for over a month.  With Spen kicking off and controlling early exchanges it wasn’t long before Liam White, Max Potter, Elliot Oliver and Ben Calam in the York midfield were stamping their authority on the game with York looking comfortable on the ball in all areas of the pitch.  A ball through the channel found Kieran Ledger who’s shot was pushed round the post for York first corner in the 2nd minute.

York continued to apply pressure, with Ben Calam down the left wing causing no end of problems for the Valley’s defence but couldn’t make the early chances count.  A cross from Charlie fort in the 12th minute found Elliot Oliver in space just inside the penalty area, bringing the ball down neatly, turning and hitting a first time shot into the roof of the net to give York a deserved lead.

York continued to control the game with the back four of Leo Jones, Sid McCoy, Roscoe Dawson and Luke Jones neutralising any Valley threat and supporting the midfield as York built from the back passing the ball swiftly across the pitch.

A free kick delivered by Ben Calam from the left caused a goal mouth scramble that resulted in the Spen keeper clearing the ball against one of his defenders with the rebound crossing the line making it 2-0 to York in the 21st minute.

With York in the ascendancy and playing neat passing football, Spen were digging deep to keep the York attackers at bay; but for all their possession and great play (akin to Arsenal – wanting to walk the ball into the net) York couldn’t find another goal and went in at half time two goals to the good.

York started the second half and went straight on the attack with Max Potter, Harvey Stephenson and Ben Calam all having shots that didn’t’ trouble the Valley keeper.  It wasn’t until the 5th minute of the second half that York keeper Joseph Hodge was called into action to collect a tame shot from the Valley forward.

With York still searching for the 3rd goal a through ball dome the channel was met by Kieran Ledger who’s shot rebounded off the crossbar to safety over the heads of the on-rushing York players.  With more shots from Kieran Ledger, Luke Jones and Liam White which failed to really trouble the keeper Spen were starting to get a foothold in the game using their wingers on the counter attack; but Yorks defensive quartet held firm.

Harvey Stephenson was unlucky to see his 60th minute free-kick smash into the crossbar and to safety.  With Spen buoyed with the score line still being 2-0, a rash challenge in the York penalty area and Spen were correctly awarded a penalty, which the Valley forward hit low and hard under the diving Joseph Hodge to put the score 2-1 in the 70th minute with ten left on the clock.

Minutes later a free kick delivered from the right by Liam White was headed on to the back post by Kieran Ledger and was despatched into the roof of the net by the predatory Charlie Fort restoring Yorks two goal cushing and making the final score 3-1.

Managers Comments (Alan Oliver): A really great start with some absolutely brilliant football. Moved the ball well. Pleasing to the eye to watch some great passing. Unfortunately, we switched off in the second half, then got composure and started playing again.

Must take on board about finishing chances.  When it’s still 2-0 teams can get back in the game.  Well done. Manager and supporters went home happy.

Man of the Match was awarded Max Potter, for his composure and work rate in midfield. Well done Max.