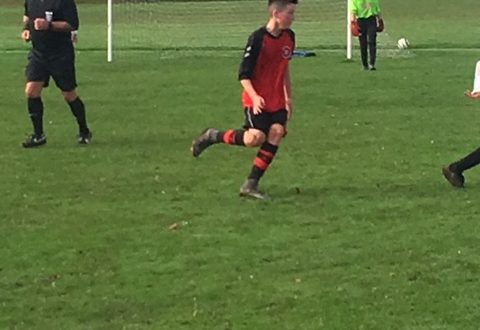 York visited Nottingham in the second round of the Michael Dale Trophy and came up against a well organised, committed team who gave them their biggest test of the season, so far.

On a fantastic playing surface, York started brightly and almost took the lead after 2 minutes. Alex Widdup controlled a difficult ball and laid it off to Kiam Browne. He played an incisive pass into the path of James Rennocks, who beat the defender and crossed for Joseph Meek. After sidestepping a challenge, Meek curled a lovely shot that unfortunately came back off the crossbar with the keeper beaten. York’s tails were up and moments later Browne was played in but his shot went the wrong side of the post. Nottingham, however, proved to be much more difficult opponents than York had previously encountered, working hard to match York in midfield and passing the ball around well.

As the first half settled down, both teams started to fancy their chances. York just edged things in terms of possession, but Nottingham put together a number of good attacks. York’s back line of Harry Shane, Billy Hobson and Ben Armitage, along with Jack Redman in the holding midfield role, stayed resolute, working well together to win the ball back, minimise the number of opportunities created against them and use the ball to start attacks for their own team. The game moved from one end to the other, goalkeeper Jacob Bryant’s excellent starting position and decision-making allowing him to clear away danger on more than one occasion. The best chance of an even half fell to Rennocks, who’s tricky skills created an opening, but the ball just wouldn’t go in and went wide of the post. 0-0 at halftime and anyone’s game.

The pattern of the game remained the same in the second half. An open, enjoyable, end to end encounter between two positive footballing sides. Jack Yates, on at half time for Bryant, was soon called into action – commanding his area, confidently dealing with through balls from the Nottingham midfield as they applied pressure in their search for the opening goal. York continued to press, too – Harry Fort pushing his team forward from midfield with some smart passing out to the wide players to initiate a number of attacks. It was from a wide area that the move began for York’s first goal. In the 46th minute, York won the ball on the right hand side of the pitch and the ball came to Browne. He slid a lovely pass into Arthur Jefferson-Hallett, who beat a defender and clipped a right footed shot which beat the onrushing keeper and went in off the post. Deadlock broken: 0-1!

York sensed this was their opportunity to go after the game and a matter of minutes later, a Rennocks corner wasn’t dealt with. Browne ran onto the loose ball and showed composure to finish well. 0-2. Nottingham, however, weren’t about to roll over easily. They came back at York and soon pulled a goal back. Yates pulled off a good save when Nottingham we’re clean through, but the ball was played back across goal and found its way into the net. 1-2 and all to play for.

York found themselves under increased pressure as Nottingham chased an equaliser but Shane, Hobson and Armitage stood firm and tackled, blocked, headed and did whatever was necessary to keep them out. With just under 10 minutes left, York finally put a bit of daylight between the two teams and, in effect, put the game out of reach. Jefferson-Hallett sent over a wonderful cross from the right and Rennocks was on hand to put the ball in. 1-3. York saw out the remaining minutes of a match that was great to watch and played in a fantastic spirit.