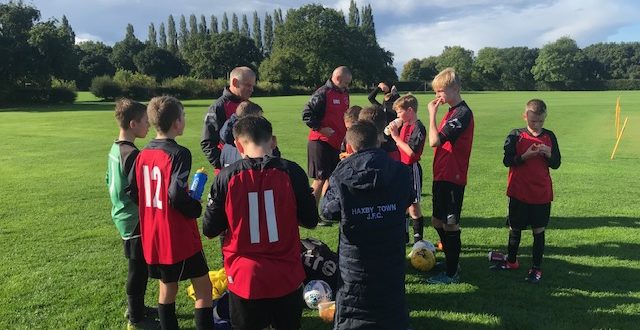 York Under 12 Schoolboys were on the road and got their second win of the season against a very tough and well organised Barnsley team, York fought hard and with true team spirit came out 4-1 winners.

The first 20 minutes were played at a very high tempo, with both teams not wanting to give an inch, this was a midfield battle with both teams struggling to break each other down. Barnsley were up for the challenge and were slightly ahead in the 1 to 1 battles, however lady luck was on York’s side for a change. The ball broke free to Harry Huddlestone on the right wing, he exploited the space in front of him, making a fantastic run to the by-line and whipped in a telling cross. The ball flew into the danger area, over the stranded keeper and nestled in to the far corner, 1-0 York, after the first 20 minutes.

The second 20 minutes again started off at a frantic pace, however York were now starting to win the 1st and 2nd ball and were now taking control, again fantastic work in the midfield saw the ball spread wide to Ozzy Shaw on the left wing, with a mazy run he penetrated the penalty area and slid in a pin point pass to Ben Farrar who was stood on the 6yd box, with a swing of the left foot the ball hit the back of the net, 2-0 York. York were now pushing for a third, with a corner to York they pushed forward, however a quick interception and a counter attack saw York stretched and Barnsley score, 2-1, game on. York remained calm and composed, on the front foot York again went for the third goal, the ball broke to Cam McMillan on the edge of the box, he launched a sweet left foot shot, the ball was goal bound, the keeper being unable to hold and spilled it in front of Huddlestone to knock in his second. 3-1 York after the second 20 mins.

The last 20 minutes saw York score a fourth, Noah Ward launched a long throw in to the penalty box, the ever battling Matty Ellison won the ball and with a cheeky flick got the ball to Ozzy Shaw who was unmarked 10yds in front of goal, bang 4-1, game over and a well-deserved 3 points were on the way to York.

York Man of the match was awarded to York keeper Stan Conner, with his encouragement and calm distribution affording York the foundation to build the victory.