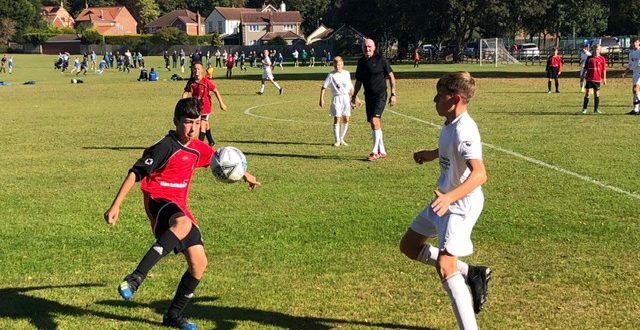 York played host to a very competitive, confident Rotherham side as both teams played their part in a well contested, attacking and entertaining game.

Rotherham arrived on the back of making their way through to the quarter final stage of the ESFA National Trophy. They had defeated York 4-1 in the reverse fixture earlier in the season, so York knew that they were in for a tough test. The game started brightly, both sides working hard to gain possession and impose themselves on their opponents but clear cut chances were scarce at both ends. Halfway through the first period, a piece of opportunism saw Lleyton Brown clip the crossbar after spotting the Rotherham keeper off his line. The same player then flicked on a cross into the path of Ben Garbutt-Smith. His first time, low strike broke the deadlock to give York a 1-0 lead. York’s back four had to work hard to keep out Rotherham, who raised their game to find an equaliser. As the first half drew to a close, Rotherham had the chance to level the scores when they were awarded a disputed penalty. Home keeper, Jack Yates, had other ideas. Just as he did against the same opponents earlier in the season, he dived full length to his right to keep out the spot kick and ensure that justice was served.

The second was as keenly fought and just as exciting as the first. Both sides put in strong tackles and showed an enthusiasm and desire to put in the hard work required to win the game. Rotherham began to gain the upper hand, strung some good passing moves together and showed their qualities going forward. Eventually, they got their reward and they equalised following a cross from their right. They looked assured and pushed York back in a bid to take the lead. Again, a cross from the right was York’s undoing and Rotherham’s centre forward swept the ball home at the far post to put his side 2-1 up. It was at this stage of the game that York demonstrated their mental toughness and increased belief in one another. They simply refused to be beaten and, with just over ten minutes remaining, equalised. Brown, surrounded by a clutch of defenders in the penalty area, showed skill, composure and neat footwork to create an opening from nothing and calmly fire into the bottom corner of the net. 2-2 and anyone’s game as both sides went for a winner in the final few minutes. Despite York having a couple of late chances, they were unable to grab a third and the final whistle was blown on a hugely entertaining, hard fought game that neither side deserved to lose.

MOM : Billy Dickinson – a strong, selfless performance in the York midfield; continues to grow in confidence and maturity.