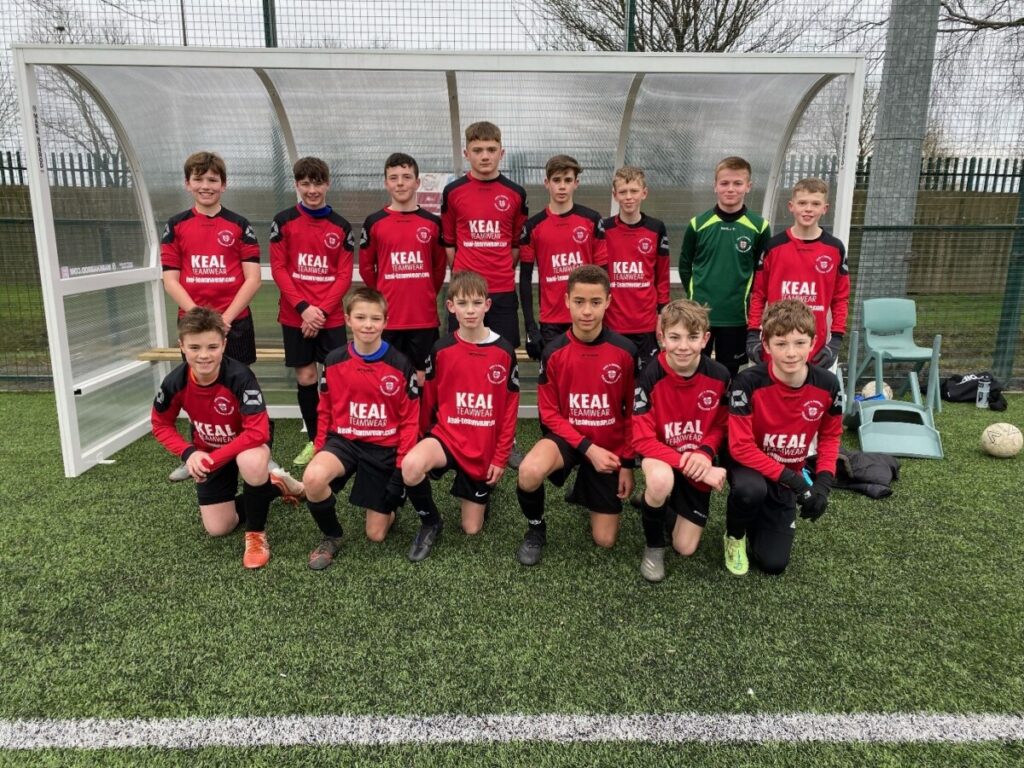 York & District Schoolboys travelled to South Hunsley school on Saturday thankful to have a game on as Storm Eunice battered the UK.  Weather conditions were ideal on the 4G pitch and the game turned out to be a competitive affair, despite York’s defensive frailties yet again being their downfall.

East Riding, currently top of the league, hosted York in the first round of the Yorkshire Cup. The game was very even to start with little between the sides. Both teams were looking to create openings, keeping possession, moving the ball well but defences were in control. Michael Kydd and Charlie Goodwin were controlling the back line well, and fullbacks Daniel Kennedy and Lucas Matthews were kept busy but equal to the task and Matthews was playing some good passes down the wing to Edward Shakeshaft to run at the East Riding defence. However, the good start was undone by an unforced error that saw a misplaced pass pounced upon and converted by East Riding for the opening goal. Minutes later further indecision at the back resulted in a wicked deflection giving East Riding a second goal as the ball rolled over the line beyond the scrambling arms of the York keeper Ben Alder.

A third goal followed as East Riding took a quick free kick, with Alder unable to secure the ball from the resulting header. 3-0 down and a mountain to climb, but the most disappointing aspect was that East Riding didn’t have to work hard for their goals. At the other end of the pitch York were competing well and Micah Douglas and Josh Light both forced saves from the East Riding keeper. However, the score remained 3-0 until half time. Micah Douglas had to withdraw from the game due to injury, which was disappointing as he was having a fine game.

Second half saw a quicker tempo from York as Miles Merer, Ewan Waddington and Harry Clarkson pushing forward, and Finn Davis and Ewan Daly providing width. Harley Waddington in central defence was beginning to push forward to try and force the play higher up the pitch. But it was East Riding who cored next getting a fourth early in the second half with a fine shot from the edge of the box. To be 4-0 down was not reflective of the game. York however didn’t give up and should’ve scored when Merer crashed a shot against the crossbar from Daly’s corner. Then Josh Light pressed the East Riding defence to win possession and scored with his follow up after the keeper saved his first shot. A glimmer of hope perhaps?

Shortly after, great work from Daly to intercept a pass and unselfishly square the ball to Light to score his second and York were now sensing a comeback. That bubble was soon burst when East Riding scored again from outside the box. York however were not finished with another great pass from Daly into the path of Light to complete his hattrick. Time was unfortunately against York as the game finished 5-3 with York left to think of what might have been if they hadn’t offered up 3 easy goals to East Riding. A disappointing outcome in what was otherwise an encouraging performance from the York boys.