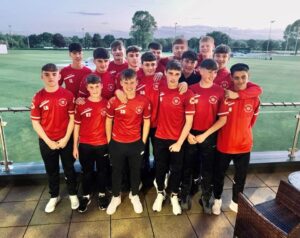 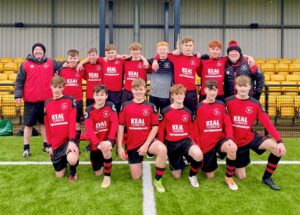 In their last ever game of district representative football, York and District U15 Schoolboys
overcame South Yorkshire rivals Sheffield in a pulsating, hard-fought final at Wombwell FC
to be crowned 2021-22 Yorkshire League Cup Champions.

Having defeated Barnsley 2-1 in a tight and tense semi-final, York lined up against the much-
fancied Sheffield, determined to upset the odds and sign off their season in style.
Sheffield started quickly, putting York under pressure, winning a free-kick on the edge of
their opponents’ penalty area within the first minute which was deflected wide. York dealt
with the resultant corner and then settled into their stride. The opening exchanges showed
that the teams were fairly well-matched. Sheffield’s front line were mobile and quick to the
ball, the York back line – missing the influential Alex Gilbey, cruelly ruled out of the game
due to a hamstring injury – needed to be on their guard to deal with a number of attacks.
Resolute defending and well-worked offside trap helped them keep Sheffield at bay. Centre-
back Jack Cottam marshalled the defensive line, supported by captain Seba Holowkiewicz,
with excellent cover provided by the pace and awareness of Ben Garbutt-Smith and ever-
dependable Billy Hobson. When Sheffield did manage to break through, they found the calm
and composed Jacob Bryant on good form in the York goal.
As the half progressed, York found that they had their fair share of opportunities. Dom
Weston was lively, switching between left and right flanks to help create a number of half-
chances; Freddie Moore showed his skill and strength when dropping into midfield to take
the attack to Sheffield; Lleyton Brown, denied space by the closing down from the Sheffield
defenders, showed his composure and quality on the ball in tight areas; Joe Meek looked
sharp and was keen to get on the ball and cause problems.
In the midfield battle-ground, Billy Dickinson worked tirelessly alongside the selfless Ben
Armitage, Leo Littlewood and Harry Fort to do whatever was required to gain the advantage
for their team: they fought for every ball, broke down attacks, regained possession and
moved the ball into dangerous areas for their front men. A very even first half ended with
the teams all square at nil-nil – and anyone’s game.
Second half and it was more of the same. On a difficult playing surface, both sides showed a
fantastic desire, determination and energy to take the game to their opponents – leading to
a thrilling, end-to-end game. Sheffield carved out the first real clear-cut chance of the half,
placing the ball just wide of the post before keeper Bryant kept his side in the game with a

great block. Sheffield were in the ascendancy and put together a number of good attacks
down their right hand side. York had to dig deep to stay in the game. In the left back
position, Rory Thornton, in one of his best performances of the season, put in a fantastic
shift for his team with his aggression, awareness and willingness to track and deal with the
danger.
As Sheffield pushed forward, it seemed that it was only a matter of time before they would
take advantage of their quality, mobile forward play and take the lead but Bryant pulled off
a fantastic, reflex save, low to his left, to keep out the ball from close range when it
appeared certain that Sheffield would score. York’s defence scrambled the ball to safety but
they were indebted to their keeper for keeping their cup dream alive. Having soaked up a
good degree of pressure, York regained their composure and began to lift their game again.
Brown started to cause problems with his trickery and strength on the ball, Weston
continued to attack down the left and Armitage and Littlewood’s prompting and energy in
midfield helped their team to push back Sheffield. As the game entered its final ten minutes,
it was difficult to predict which team would come out on top. Both teams continued to
mount attacks, determined to clinch victory with extra-time looming. And then, with two
minutes left on the clock, a decisive breakthrough for York. Weston won the ball on the
right hand side and, beating two defenders, made his way into the Sheffield penalty area.
Maintaining his balance, he beat the left back on the outside, cut in from the by-line with
the ball on his left foot, skipped past a recovering defender and struck an unstoppable shot
past the keeper at the near post. 1-0 to York. Sheffield found the opportunity to mount
attacks in added on time but York maintained their shape, standing firm to see things out
and claim a memorable, well-earned victory and the Yorkshire League Cup Trophy.
Champions of Yorkshire!

MOM: York goalkeeper Jacob Bryant, supported brilliantly by the defensive unit of Billy
Hobson, Ben Garbutt-Smith, Jack Cottam and Rory Thornton, showed his class and ability
with two brilliant match-saving moments in the second-half, giving York the platform and
belief to go on and claim a memorable win.