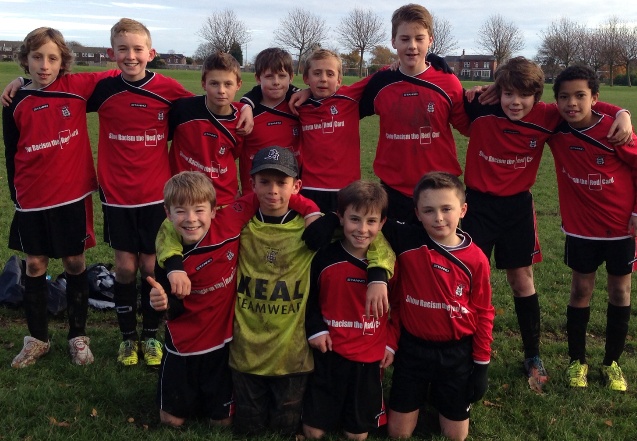 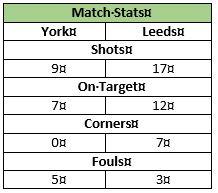 York Started the brighter of the two sides putting pressure on the Leeds goal. A great run down the left wing from Liam White putting a through ball to Will Jarvis, who on a driving run through three Leeds defenders was hauled down in the penalty area.  Will stepped up and coolly slotted the penalty past the Leeds keeper making it 0-1 to York.

Leeds then had a chance which brought a fine save from Nathan Storr.  Some excellent midfield work from Jimmy Gore and Elliot Oliver released Josh Hall down the right flank to dribble the ball through the Leeds defence before providing an inch perfect pass for Will Jarvis who buried the ball in the back of the net making it 0-2.  York were in the ascendency and limited Leeds to only a few chances to attack.  With more great midfield play from Jimmy Gore and Elliot Oliver again releasing Josh Hall down the wing for a fine solo run down the right flank resulting in a great shot and producing a fine save from the Leeds keeper, only for the ever predatory Will Jarvis to hammer the ball home to claim his hat trick making it 0-3 going into the break.

Leeds came out strong after the break only to find the defensive trio of Tom Eaton, Simeon Hopkinson and Luke Jones resolute in their defending.  It was York who were then limited to attacking forages and the Leeds pressure finally paid off at the end of the second period where a mix up between the York defence and keeper allowed Leeds to pull one back making it 1-3.

In the third period Leeds pinned York back but the York team pulled together with a strong midfield display from Bankole Claudius-Cole and Alex Kemp linking up with the York attack to relieve some pressure off the York defence.  Leeds were now taking the game to York but with some great blocking challenges from Luke Jones, Alfie Evans and Simeon Hopkinson keeping the score at 1-3.  But the pressure paid off for Leeds and after a flurry of corners Leeds pulled the score back to 2-3 with a shot into the roof of the net.  With minutes left on the clock Leeds sensed an equaliser and in the last minute Leeds were awarded a penalty for and adjudged foul in the area which they converted with the last kick of normal time making it 3-3 at the final whistle and extra time imminent.

The last period of extra time produced a clearance from Jimmy Gore and one shot on target from Leeds as they tried to push for the winner.

With the scores level at 3-3 after extra time the game went to penalties.

Leeds stepped up to take the first penalty, Nathan Storr dived and got a hand to it but the shot was just too strong for him to keep out.  Tom Eaton stepped up to take the first penalty for York and duly converted sending the keeper the wrong way making it one each on penalties.  The second Leeds penalty produced a great penalty save from Nathan Storr, and Josh Hall stepped up to coolly score York’s second penalty making it 1-2 on penalties and giving York the advantage.  Leeds converted their third penalty while York missed making it 2-2 after three. Nathan Storr dived for Leeds’ fourth penalty pushing the shot onto the underside of the crossbar only to see it bounce back down over the line, another fine save from the Leeds keeper then gave Leeds the advantage making it 3-2 after four penalties had been taken.  Leeds fifth penalty was hit high over the bar and York needed to convert their last penalty to take it to sudden death.  Will Jarvis calmly stepped up and fired the ball inside the right hand post to make it 3-3 after five penalties taking it to sudden death.  The keepers were enjoying the penalty shoot-out as Nathan Storr then made two excellent penalty saves along with the Leeds keeper before Simeon Hopkinson broke Leeds hearts by firing into the top corner sending York into the second round of the “Yorkshire Green Un Cup”, bringing to an end an enthralling encounter making the final score 6-7 to York.

A well-deserved Man of the Match was awarded to Nathan Storr for excellent goalkeeping throughout the game and an outstanding performance in the penalty shoot-out expertly saving three of them.