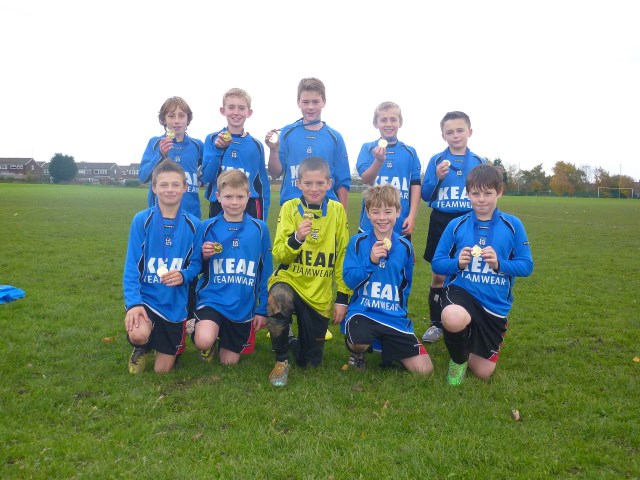 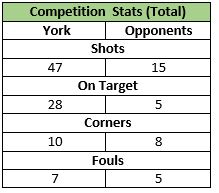 High flying York U11s schoolboys win North Yorkshire District 7 a-side competition with three wins from four to make it through to the Northern Finals to be held at Sunderland in March 2014.

York started with a match against Sheffield with Will Jarvis pouncing on a loose ball in midfield taking on the Sheffield midfield and defence with a superb run through the centre to calmly slot the ball past the Sheffield keeper to put York one up in the first minute.  York continued to press and from a corner Josh Hall teed up Jimmy Gore who sent the keeper the wrong way to make it 2-0. Sheffield started to come into the game but some excellent defending by Simeon Hopkinson, Liam White and Luke Jones kept Sheffield out going into the break at 2-0.

Sheffield started the second half as they finished the first forcing a fine save from Nathan Storr but York again took charge of the game with some great interplay between Jimmy Gore, Josh Hall and Will Jarvis in midfield and from a resulting corner Will Jarvis slotted the ball through to Josh Hall who neatly finished to make it 3-0 at the final whistle.

A well drilled and determined Leeds side were York’s next opponents.  Leeds made it difficult for York to find their fluidity and forced some early fine saves from Nathan Storr before making it 1-0. York were pushed back but some fine tackling from Tom Eaton and Elliot Oliver in midfield and a saving sliding tackle form Luke Jones on the edge of the area kept the score at 1-0 at half time.  Leeds started the second half as they finished the first and were soon 2-0 up.  York started to find their feet in the game but their chances were limited to longer range efforts from Will Jarvis and Josh Hall.

Scarborough were York’s next opponents.  Form the kick off York laid siege to the Scarborough goal which paid off in the second minute with a fine solo goal from Josh Hall, collecting the ball in midfield and running at the Scarborough defence to slot the ball passed the keeper. With York putting more pressure on Scarborough a sublime through ball from Simeon Hopkinson set up Harry Colville who finished with aplomb to make it 2-0.  Coming to the end of the first half some fine awareness and interchange play from the pairing of Will Jarvis and Josh Hall made it 3-0 with Josh Hall supplying a beautifully weighted pass that Will Jarvis finished in style.

In the second half Scarborough started to find their footballing feet but a great save from Nathan Storr and some excellent saving blocks from Tom Eaton and Harry Colville kept the score at 3-0.  York upped the tempo and another great solo goal was scored by the in-form Josh Hall making it 4-0.  With York now in the ascendancy, great midfield play from Elliot Oliver and Jimmy Gore released Will Jarvis for him to supply Harry Colville to make it 5-0 with a well-placed strike.  More great passing from the York players allowed Harry Colville to return the favour and provide the assist for Will Jarvis to finish of a great move calmly slotting the ball past the Scarborough keeper to make it 6-0 at the final whistle.

Barnsley were York’s last opponents of the day and with York well into their stride Harry Colville opened the scoring in the first minute with a great passing move with Will Jarvis, drilling the ball to the bottom corner.  The trio of Will Jarvis, Josh Hall and Harry Colville made it 3-0 with a now trademark goal from Josh Hall before Harry Colville sett up Will Jarvis in the first three minutes.  With the York defence, Tom Eaton and Elliot Oliver, pushing high up the pitch and linking well with Jimmy Gore in midfield, providing a solid foundation for Josh Hall to put Will Jarvis through on goal to make it 4-0.  Again the deadly trio combined for Harry Colville to provide for Will Jarvis who neatly slotted the ball into the bottom corner to claim his hat trick. As Barnsley were put to the sword Will Jarvis turned provider for Luke Jones to hammer the ball into the back of the net making it 6-0 going into the break.
The second half continued on the same theme with York pressing forward and a great Corner from Liam White was turned in by Will Jarvis calming his fourth goal of the game to make it 7-0.  Barnsley were limited to catching York on the break, as they pushed higher up the pitch, and scored two consolation goals before Jimmy Gore provided Luke Jones with a well weighted pass for an easy finish making it 8-2 at the final whistle.