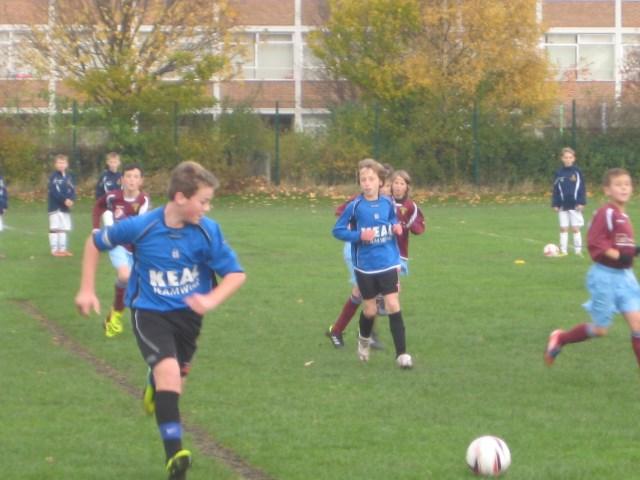 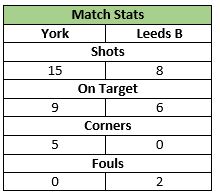 From the kick off both teams struggled to find their stride; but it was York, who half way through the first period started to dominate with some good attacking runs down the left flank from Declan Simpson.  And it was Declan who put a sublime through ball for Will Jarvis who calmly rounded the Leeds keeper and fired low to the bottom right of the goal making it 1-0.

Both teams battled hard with chances at a minimum at either end, the York defence of Simeon Hopkinson, Luke Jones and Liam White held firm while the midfield of Jimmy Gore, Josh Hall, Elliot Oliver and Declan Simpson pressed to find a way through, and as York applied more pressure through the midfield it was Josh Hall who went on a tantalising run down the right to the by-line cutting the ball back across goal which the Leeds defence could only turn into their own net making it 2-0 going into the break.

At the start of the second period Leeds applied some pressure to the York goal; but it was Josh Hall collecting a pass from defender Simeon Hopkinson and running through the Leeds midfield to supply Will Jarvis who calmly shot bottom left of the keeper and making it 3-0.

Five changes were made halfway through the second period with the introduction of Alfie Evans, Bankole Claudius-Cole, Alex Kemp, Tom Eaton and Harry Colville.   York continued to press with shots from Harry Colville, Josh Hall and Will Jarvis before Liam White, from a run down the left, put a well weighted thorough ball for Will Jarvis to put York 4-0 up and claim is hat trick with another well taken goal.

Leeds were sparked into life at the end of the second period and some great keeping from Nathan Storr kept the visitors out going into the break.   Leeds continued to press at the beginning of the third period and were rewarded with a goal early on from their first strike coming in of the post with the Leeds attacker quicker to the ball from the rebound making it 4-1 in the first minute of the third period.

With the play now opening up and the game going end to end with some tenacious midfield work from Tom Eaton it was Harry Colville supplying Alex Kemp with a one on one with the keeper for him to see his first strike the post but he was quicker to the rebound and scored with the second attempt from a tight angle making it 5-1.

Leeds enjoyed a spell of pressure; but finding Alfie Evans, Bankole Claudius-Cole and Nathan Storr standing strong but with some intense pressure Leeds pulled another goal back making it 5-2.   For the last ten minutes of the game York pressed Leeds with ‘on target’ shots from Elliot Oliver and Harry Colville and the midfield battle being won by Tom Eaton, Alex Kemp and Bankole Claudius-Cole; but York found the Leeds keeper and defence resolute and were unable to add to their tally with the game finishing 5-2.

Men of the Match was deservedly awarded to Declan Simpson and Tom, Eaton for their dominating midfield displays.